Barring the television station’s transmitter going down tonight, TT will be popping corks on a winning stretch that began in March 2001 – in media terms, an epoch ago.

Since then, it says it has won the 6.30-7pm weeknight slot every week – a record which Seven argues is unmatched since the introduction of “people meters” for ratings in 1991.

It cops some criticism for its more tabloid stories, but TT has also been responsible for a series of outstanding investigations into child sex abuse, the criminal justice system and more.

Producer Graham Archer, who, along with Frank Pangallo, has been on board since day one, told Media Week that the mix of tabloid and serious stories was part of the reality of commercial television.

“In a town as small and tight-lipped as Adelaide, you can’t do blockbusters every week,” he said.

“As journalists, that’s our core business, but you have to maintain the audience and survive, so you need to do those stories. That’s the contract you have with the audience – entertain and engage, and work in those longer stories.”

Archer estimates the show has done up to 25,000 stories over the past two decades, but he does single out a number of investigations for their impact and importance.

His championing of what he believed to be miscarriages of justice – including, most prominently, in the Henry Keogh case – did have an impact on the State Government’s changes to the appeals process, which now allows cases to be reopened to consider new and compelling evidence.

That process led to Keogh’s murder conviction being set aside. The DPP decided not to pursue another trial.

Archer is also proud of investigations into the whereabouts of the Beaumont children, his dogged pursuit of the missing assets of convicted pedophile Peter Liddy (which he found, and the proceeds of the sale were provided to victims), and the uncovering of child sex abuse in SA institutions – work which Archer argues led to the Mullighan inquiry.

Today, TT airs only in Perth and Adelaide, and Archer says this local currents affairs work is a precious asset that shouldn’t be taken for granted.

“The localism is crucial to our survival – it’s what our audience appreciates, I think,” he says.

“Sometimes that can be taken for granted. This is really a precious part of the media landscape in this city.”

The show’s strong ratings seem to have erased questions about its immediate future, but Archer is probably right when he says that if it is ever scrapped, Adelaide is unlikely to again see a local TV current affairs show.

“In the current climate, it’s unlikely that one of the networks could spend the money and come back into town.”

The very first beneficiary of the Federal Government’s multi-billion-dollar decision to build Australia’s new submarine fleet in Adelaide appears to have been Rupert Murdoch.

The State Government forked out thousands of dollars to The Advertiser on the day after the announcement to insert a self-congratulatory double-page spread on the decision.

The next potential win for the media was the chance to fly to France with SA Premier Jay Weatherill, courtesy of the taxpayer.

Weatherill made the offer to Adelaide media after deciding to jet off this week to meet with successful subs bidder, French company DCNS, to push the case for SA jobs.

His Seven colleague, Today Tonight‘s Hendrik Gout, a former editor of InDaily’s precursor The Independent Weekly, also attacked the offer, including an ambiguous reference to InDaily in this story which may have suggested to some viewers we were winging our way to France on the Government’s coin.

For the record, InDaily declined the chance to send a reporter on the trip (you can read more about our rationale in Tom Richardson’s column today).

Some outlets decided to pay their own way. Media Week has asked the Government which outlets are having their travel covered (however it’s certainly not impossible to do independent, rigorous journalism on a trip even if your expenses are being paid).

The fuss could have some unintended consequences for Seven reporters at least.

Seven’s Graham Archer, a fiercely independent journalist who added oversight of Seven’s news service this year to his task in charge of Today Tonight, told Media Week that he opposed his reporters accepting Government hospitality at events like the Clipsal 500.

“I haven’t been in charge of this news program for long, but if I have control over those things it won’t be happening.”

Disruptive companies often face one common issue: resistance from those who are threatened most by their existence.

Former South Australian Glyn Brokensha, one of the guest speakers at InDaily’s upcoming “Disrupters” event, knows this better than most, after his recruitment program, Expr3ss, threatened the traditional, time-heavy and expensive methods of recruiting staff.

Glyn was working as a psychotherapist when soon-to-be business partner Carolyne Burns recognised the potential for a program he had developed for his practice to help companies recruit.

The idea was to create an online system that used Glyn’s algorithm to match applicants to jobs. It promised not only quick and easy recruitment, but better staff retention by ensuring recruits were better-matched to positions and company culture. The Expr3ss software was born, to either the fear or the indifference of many traditional recruitment companies.

The program, particularly when partnered with equally disruptive job aggregation websites, can save time and money and remove complicated processes of recruiting appropriate staff. This, Glyn says, was threatening to expensive recruitment companies, but also to in-house HR departments – more so than he realised at the time.

“In some ways we were pretty naive about how impactful it would be,” he says. HR managers, keen to protect their own patch, were hostile.  In retrospect, though, he believes some of the pushback actually gave the fledgling company a higher profile.

The key for Expr3ss was to get to the “C” class executives – chief executives, chief financial officers and chief information officers – who were directly concerned with the bottom line of the company.

“We can show them how it can remove some of the ‘pain points’ for them – they will carry their HR department with them,” he says.

Glyn will share more of his insights at the Disrupters event on June 23, now confirmed to be held at the Published Arthouse in Adelaide’s CBD from 2.15pm.

The facilitator will be Bernadette Schwerdt, author of Secrets of Online Entrepreneurs. As well as Glyn, the panel will include Elaine Stead, Blue Sky Venture Capital investment director; Mark Bevan, co founder of Joust; Andre Eikmeier, founder of Vinomofo; and a senior Australian representative of one of the world’s most well-known disruptive companies – Uber.

For more information and to book your tickets, go here.

The submarines decision is a timely reminder about the lazy contempt of the national media for South Australia (the Fin Review rolled out the “serial killer capital” line, The Australian  plumped for “mendicant” state, and the Daily Telegraph declared the subs announcement had “saved South Australia from falling off the map”). But let’s not be glass-jawed about this – there are plenty of other media misfires to keep us busy this week.

WHAT IS THIS? A submarine for ants? It has to be at least 3 times bigger! @BuzzFeedOzPol @MarkDiStef @vanbadham #DZ pic.twitter.com/HDsXAx75qC — Benton Wecker (@BentonWecker) April 28, 2016

To begin, we aren’t technically in an election campaign yet (although we most certainly are), but certain media outlets have already showed their political hand.

Murdoch’s Sydney tabloid, The Daily Telegraph, isn’t going to bother too much with old-fashioned ideas like balance. Here’s its Thursday front page: 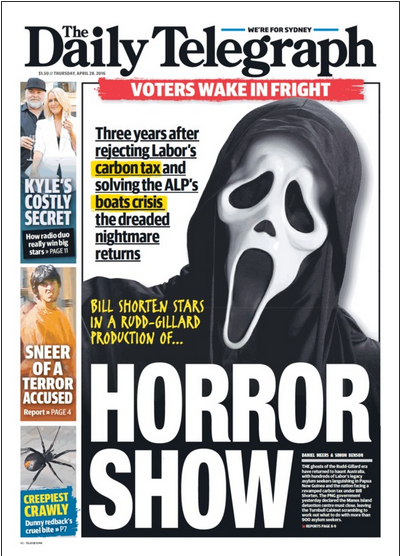 Closer to home, The Advertiser forgot the attribution in this header:

A 60 Minutes crew escaped jail in Lebanon by the skin of its teeth last week after its botched involvement in an attempted “child recovery” effort. The men the program allegedly paid to carry out the attempt to bring back an Australian mum’s two children remain in prison.

The Australian’s coverage of the debacle has been outstanding, with the pinnacle this report in last Saturday’s edition. It pieces together the events with remarkably detailed reportage, including the fateful phone call that led to the crew’s arrest.