A shocking story appeared on the TV news on Wednesday night, with Seven reporting “exclusively” that a dognapping ring was operating in the north-eastern suburbs of Adelaide.

The evil band’s modus operandi, Seven reported, was to mark homes with pink paint, before returning to take the home owner’s pet to use as fodder in illegal dog-fights.

The story was chased by numerous other outlets, but the trouble for reporters was that there was no evidence that the original story was true despite the fears of locals. In fact, as early as Wednesday afternoon the SA Police said as much, and an engineering firm warned that pink markings on curbs and footpaths most likely related to underground services – nothing to do with a 101 Dalmations style heist.

As is often the way these days, once the story was out there, others felt compelled to follow, with ABC 891 and The Advertiser, among others, jumping on board (a later Tiser post questioned whether the pink marks were a hoax).

However, a few minutes on Google – and some common sense – would tell you that this is an old urban myth.

The RSPCA tells Media Week that the scare – or a version of it – comes up from time to time. Last year, for example, people in one Adelaide suburb feared that mysterious chalk marks were related to impending dognapping. It wasn’t true.

The urban myth website, Snopes, records this tale in their archive, tracing it back to stories doing the rounds in Perth in 2013.

We’ve found different versions reported all over the place – in a UK paper, and in Queensland. It appears none of the stories were true, just different versions of the same urban myth. Nevertheless, Seven returned to the story last night, with interviews with several people whose dogs have gone missing.

No doubt people should be careful with their rare and valuable dogs, and the RSPCA has fears – so far unproven – about possible dogfighting rackets operating locally, but the “pink paint” angle appears to be a furphy.

Here’s how the Tiser first reported it:

And here’s a similar report from a UK paper (it wasn’t true): 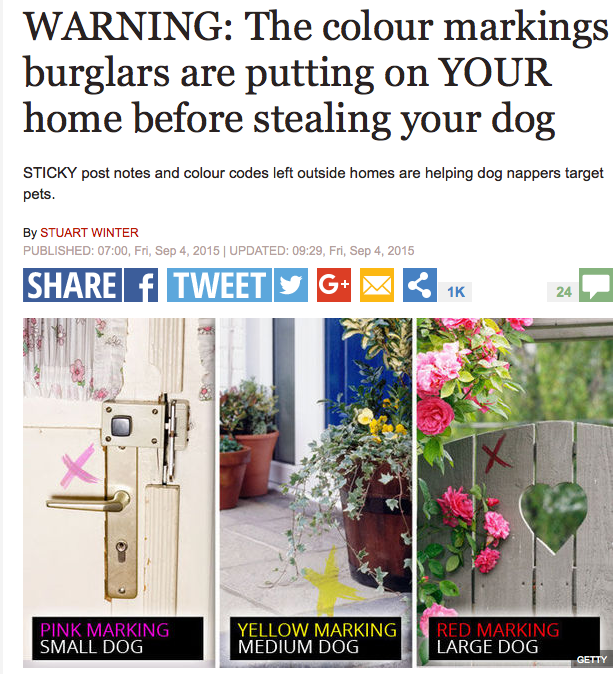 But here’s what the SA Police said before the original Channel Seven report went to air:

And a telling warning from an Engineering firm, again out there before the original report went to air: 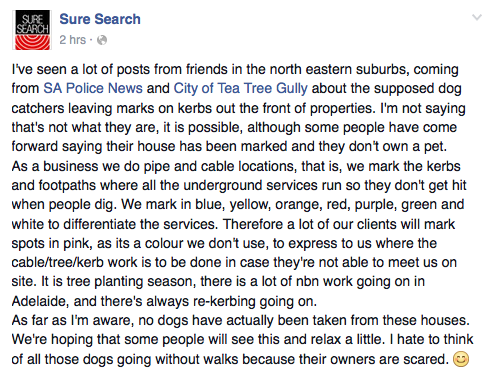 We leave the last word to PR around town and Tiser columnist Petra Starke, who first called out the story and made the point that should have been obvious to anyone.

This #Adelaide “dognapping” story is surely nonsense. Thieves don’t usually signal their intention to rob a house by spraypainting it first.

Winter has spent 14 years as a journalist, establishing a fine career at the ABC including as a TV and radio reporter, news reader and, in recent times, head of the Country Hour team in SA.

“I’ve had many opportunities and grown as a journalist and a person over that time. It has been a wonderful ride, full of amazing and heartwarming moments, which has left me with a fabulous collection of experiences, friends and soulmates.”

She said she was “very excited to be moving into the next phase of my career with The Press Gallery”.

This is one for the PRs and communications operatives out there who spend too many hours of their lives poring over media releases.

Premier Jay Weatherill’s media unit has started using a new format for media releases, which is very different from the past.

“Our news releases have been written in a style very similar to how print media present news stories – using the punctuation and quotes that are common in newspapers,” she says.

“Increasingly, we are finding we are asked for information from a broader group of recipients – both among the print, electronic and digital media and other members of the public, who access media releases for information.

“The new general purpose news release is intended to be a more modern and useful format for the media – providing quick, clear facts at the top of the release with more detailed background below, as well as quotes grouped together for printed-word media to use. The new style is similar to the style used by the Victorian Government.” 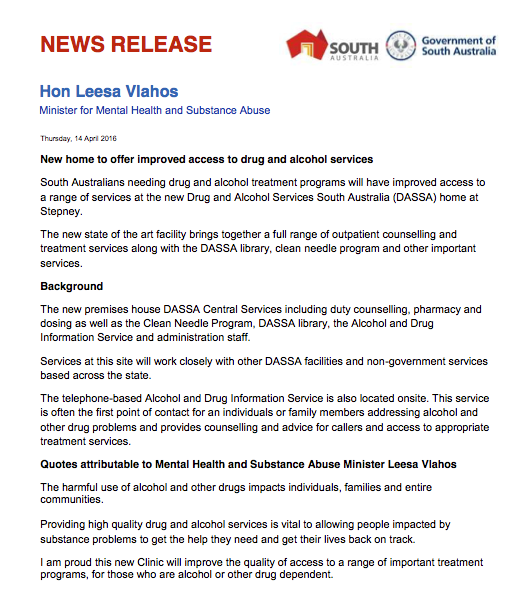 Disruption: how to get it done

Disruptive businesses are bypassing tradition and doing it their own way, mostly using digital tools.

InDaily is hosting an event with some very successful disrupters to give local businesses inspiration and guidance about finding your way in a new, uncertain world, but one full of opportunities.

To be held in Adelaide in June, the event will include Bernadette Schwerdt, an Adelaide-raised entrepreneur and author, Vinomofo partner Andre Eikmeier and Expr3ss! founder and chairman Glyn Brokensha.

The panel will talk about individual experiences, including the pros and cons of taking a different route and using disruptive business tools, often in the digital sphere.
Schwerdt was born and raised in Elizabeth, in Adelaide’s northern suburbs, before going on to a stellar career in marketing.

Here’s a taste of what you can expect from her – the following taken from her book Secrets of Online Entrepreneurs.

“I’ve met thousands of business owners at my small-business marketing workshops and forums, and for a small but significant cross-section, they all have one thing in common: the hope that things will just ‘return to normal’, the way they used to be, whatever that was. But there is no normal any more, and it’s become quite clear that to keep a business afloat in the global marketplace today, and with the ‘internet of things’ upon us, the pace of life for them is about to pick up, not slow down.

Fortunately, she’s got many ideas for not only navigating this new world, but thriving in it.

For more details about the Disrupters event, and to book tickets, go here.

Channel Nine has done untold damage to the reputation of its flagship current affairs program, 60 Minutes, with its shocking involvement in a child abduction attempt in Lebanon. Its reporter and crew are in jail in Beirut, along with the Australian mother of the children. It looks like a case of chequebook journalism gone terribly wrong – and a fundamental misjudgement about the legitimate role of reporters in the stories they cover. The most damning evidence is the footage the crew shot: the children being violently taken on a Beirut street, and their elderly grandmother assaulted.

This story would also sit comfortably in the category above, but our colleagues at Crikey have done some good work to crunch the numbers on where the ABC is now spending its production dollars. As predicted more than a year ago when the ABC decided to shut down its Adelaide production studio, work appears to be flowing eastwards.

The list of companies the ABC has used in the past three years shows that NSW companies dominate. Of the 208 production companies contracted by the ABC in this time, only 24 did some work in SA.