The future of advertising

Media Week asked her to explain further about why programmatic is important, and why she believes it will dominate the Australian advertising world within three years.

The key advantage is efficiency: the automation and deep level of analysis allows online ads to be tailored to specific individuals in real-time.

“Relative to corresponding media budgets, the high-volume, low-dollar, high-complexity nature of digital makes it the most labour-intensive medium in the advertising industry,” Leary explains.

“Some smart tech players in the US solved the laborious nature of implementing these digital campaigns by automating the process of buying and selling ad units. Just like with the automation of the stock market in the mid-90s, digital display spots began to be bought and sold using algorithms in real time – by creating an auction between buyer and seller that happens in the 50 milliseconds it takes for the page you are looking at to download. This is called ‘real time bidding’ (RTB) and sits within the overarching definition of ‘Programmatic Trading’.”

While it usually refers to online display advertising – on news websites, for example – that is managed via software, it can also include non-RTB methods and types such as Facebook ads and the Google Display Network.

“It is important to understand the basics of programmatic because this will become the dominant form of media buying and selling – anything that can be automated will be. In the US, by 2015 automated trading accounted for nearly 60 per cent of digital ad trading, which by the way has almost surpassed TV. In 2016 it will be 67 per cent and by 2017 it will account for nearly 75 per centof ads sold in the industry. In Australia, it is also the most rapidly growing part of the digital ad market.

“What is important to note here is that a technology that started in digital is rapidly moving to offline media – TV, radio and outdoor.”

“Why? Because of the efficiency. The market loves the ability to buy media based on customer data – this is the new world and it will dominate the Australian market in less than three years.”

The consumer version of Oculus Rift – a virtual-reality headset – started shipping last month, sparking a flurry of speculation about what it will mean for marketing, PR and the media.

Companies such as the New York Times have already begun experimenting with VR, using a smartphone app and the inexpensive Google cardboard viewer.

Experienced Adelaide PR operator Tim Hughes told an SA marketing summit earlier this year that VR would soon become mainstream and, as has happened with the ubiquity of mobile devices, the PR industry will need to deliver content to suit the new format.

InDaily has reported on building firm Chasecrown developing its own use of VR, which it says could spell the end of display homes.

As with any new technology, however, it’s only as good as its execution.

That is a point made this week by Tourism Australia’s chief marketing officer, Lisa Ronson, who told the Mumbrella Travel Marketing Summit that using VR won’t make a boring offering more interesting.

“The one thing about VR – and some brands are getting it right, others not so much – is that it doesn’t make something that is really boring suddenly interesting. It sounds obvious but there are some brands that are going, ‘Oh, let’s sell our product by doing VR’.

“But if the product doesn’t lend itself [to VR], don’t force it. It’s about looking at what the consumer is going to find interesting. They are just not going to stand there for 10, 15, 30 seconds or a minute, and keep engaging with the content if it’s not so interesting.

“Yes, it’s new technology and that is interesting, but people need to be compelled and they need to be engaged.”

From my personal experience with a developer version of Oculus Rift, one of the key barriers to use will be motion sickness, which is reported by a percentage of users.

Admittedly, I can get motion sick watching a movie, but the Oculus Rift immersive world – which is amazing – made me feel distinctly woozy. 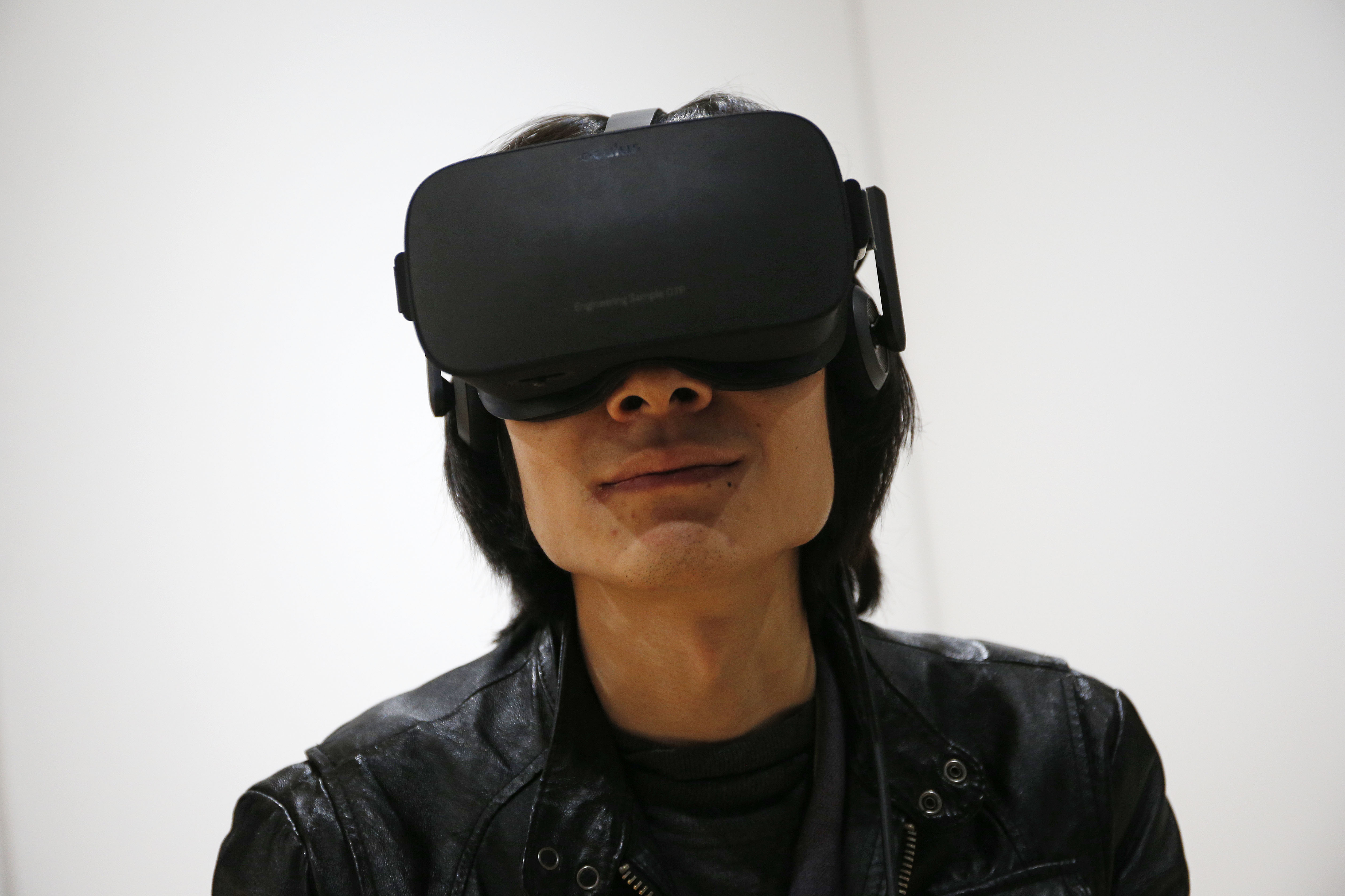 Tough News Corp journalist Samantha Maiden, who cut her teeth in Adelaide newsrooms, is in a deal of legal trouble.

Maiden, the Canberra-based political editor for the Murdoch Sunday papers, has pleaded guilty to two charges of not obeying the direction of police and driving with a mid-range prescribed content of alcohol.

According to this report in The Canberra Times, the judge has warned her she faces a jail term.

“It was an appalling piece of driving,” Magistrate Pearce said. “You are facing a jail sentence.

“You were on the wrong side of the road and there was a police pursuit.”

According to the Times, Pearce ordered a pre-sentence report to “look at alternatives to a jail sentence”, but said: “It is a very serious matter, make no mistake.”

Maiden’s not the first journalist to be caught drink-driving, and won’t be the last, but it is interesting to note the News Corp treatment – or non-treatment – of her story.

When rival Fairfax’s Antony Catalano, who runs the Domain real estate business, faced court on drink-driving charges last year, it received blanket coverage from the News Corp papers, including in The Advertiser.

Not a peep yet about the latest developments in Maiden’s case.

Logies: we get what we deserve?

In a good year, Australian television’s night of nights, the Logies, can be very much like Eurovision, or Santa Claus Conquers the Martians – so bad it’s good.

Most years, though, it’s just embarrassing – a celebration of mostly superficial, trashy shows, a focus on “personalities”, and, often, a cavalcade of international B-grade guests to top off the cultural cringe.

But maybe it’s simply reflecting the cultural tastes of Australians?

Take last Sunday night’s ratings. The new Daryl Somers vehicle, You’re Back in the Room, which recycles the tired old vaudeville of a hypnotist “making” people do unlikely and embarrassing things, brought in massive ratings around the country.

Adelaide was no exception. The Nine show – panned by critics – pulled in a very respectable 106,000 viewers, only behind My Kitchen Rules and Seven News.

By contrast, the critically acclaimed The People Versus O.J. Simpson on Ten attracted a relatively tiny 27,000 viewers.

The snorting of critics aside, Nine will be very relieved if these sorts of numbers can continue. The network has had a shocking start to the ratings year, which no doubt has impacted on the low numbers for its Adelaide news service, which lost the gains it made last year against the dominant Seven news.

Reflections on the media in Adelaide

Your columnist has been interviewed by the Adelaide Show podcast about my career in the media.

After the interview, I attempted to give hosts Steve Davis and Nigel Dobson-Keeffe a few tips in writing shorthand – a dying skill that every journalist should nurture.

You can listen to the podcast here.

There’s been plenty of criticism this week of a Daily Telegraph column outlining six reasons why Waleed Aly shouldn’t win the Gold Logie. The column makes no sense, unless it was an attempt at irony, in which case it failed on that score as well. However, the bigger question for the media is why everyone is obsessed with what Aly says on Ten’s pretty bog-standard panel show, The Project. His “editorials” are regularly regurgitated by just about every news website in Australia. Surely news should be more than what some bloke – albeit an erudite, influential one – said on TV last night?

It’s been a good week for journalism at local, ultra-local and international levels.

Overseas, journalists’ hearts were warmed by the story of nine-year-old reporter Hilde Kate Lysiak, who runs her own website, Orange Street News, covering her local neighbourhood. She attracted international attention after scooping other local news outlets on the story of an alleged murder. Lysiak copped some criticism for getting involved in such a serious story, but she hit back in feisty style. “If you want me to stop covering news, then you get off your computers and do something about the news. There, is that cute enough for you?”

Internationally, 400 reporters from the International Consortium of Investigative Journalists collaborated on the biggest leak in the history of journalism. More than 11 million documents came to light, revealing the tax affairs of high-profile individuals and corporations going back four decades. The story reached South Australia, touching on the billionaire owner of SA Power Networks.