Beecher, one of Australia’s best media thinkers and chair of Solstice Media (publisher of InDaily), warned that the current model of funding journalism was collapsing, and no-one had yet come up with an alternative.

He also made the observation that there was plenty of “content” in the market – probably too much.

The last couple of years had been the most convulsive in the history of the media, since the invention of the printing press, he said.

“One of the consequences of that… [is that] we don’t actually really know what’s going to happen. We might pretend we know, we might be spruiking something, but we don’t know.  The disruption that’s going on in this industry… is entirely unpredictable and that’s the world that we live in.”

The old model – where “content” would be created by journalists, for example, and delivered via a one-way channel to consumers, and funded by advertising – was dying rapidly.

“That whole model has blown apart completely and now we have a situation where the effectiveness of advertising across all media is being questioned in a way that it never has been in the past 100 plus years since the invention of advertising,” he said.

With digital, the effectiveness of advertising is laid bare – advertisers and markets know exactly what works and what sells.

“That has caused pandemonium in our industry and continues to cause pandemonium.”

“But it’s become ubiquitous; in fact, over the last few months a term has evolved around the world, and those of us in the industry now talk about it quite a lot, called ‘peak content’. I’m sure all of you as consumers of content feel this personally – we’re just completely inundated and invaded by all kinds of content, whether it’s on social media, whether it’s editorial content – whatever that means any more – whether it’s commercial content.

“Accenture Interactive, the international consultancy, did some work on peak content, on the amount of content, on the fact that, as they describe it, marketers are drowning in a tsunami of content. According to the data produced by Accenture, 50 per cent of marketers have more content than they can effectively manage, and 80 per cent of these marketers predict that their output of content will increase over the next two years. That’s just marketers, that’s not publishers, that’s not journalists.

“Somehow we’re all going to have to come to terms with some way of corralling this content both as consumers and as creators.” 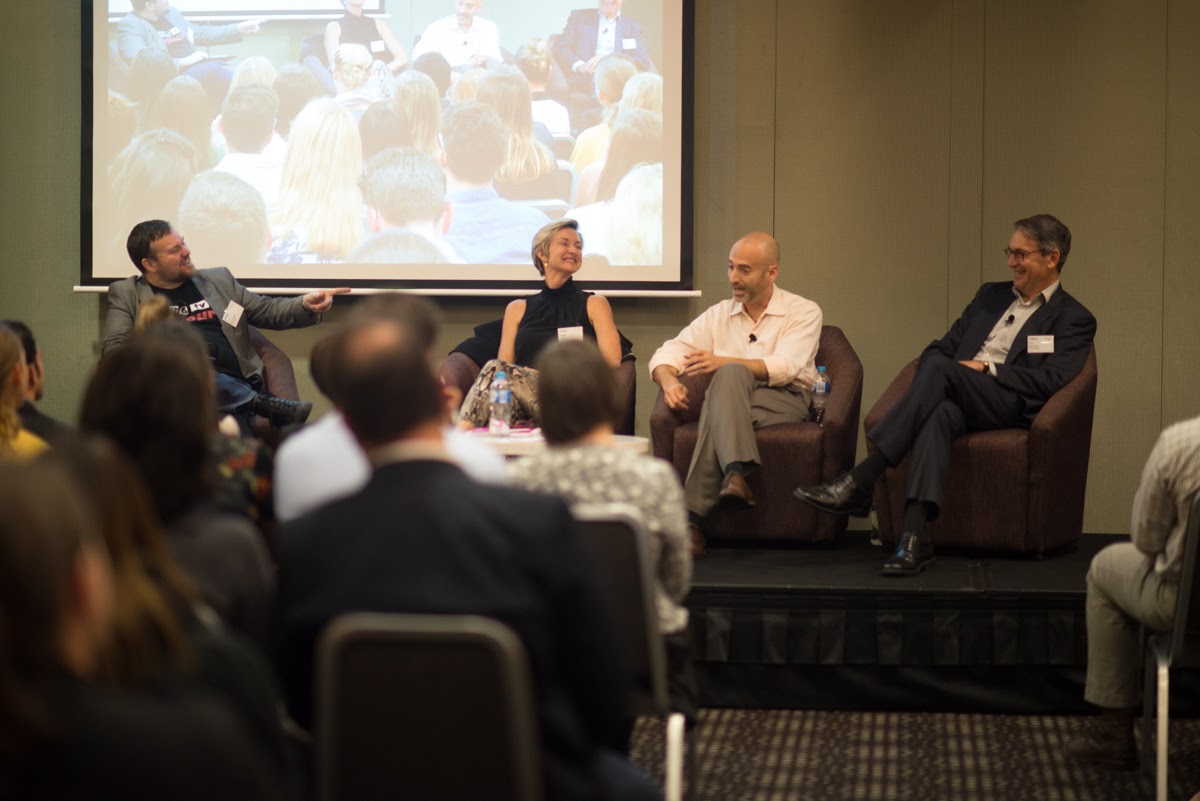 Beecher went on to outline the “rapidly disappearing” funding mechanism for serious journalism.

He said “serious, proper journalism” covering parliaments, courts, education and science and technology, for example, was being “ripped apart”, and questioned how this would impact a democracy like Australia.

While Australia had a government-funded journalism model – the ABC – the nature of its journalism could be affected by the government of the day.

“The funding of journalism, which always was commercially funded except for the ABC, probably should have started off in a bucket like the funding of universities, or museums, or education – but it ended up in the commercial bucket….

“Interestingly enough, there are a small number of countries – one in particular, France – where the government does actually provide very substantial subsidies to journalism because they see this as a  specific problem.”

He hastened to add that, in Australia, governments were very unlikely to see this as a palatable solution.

Next week, we’ll have more from Digital Futures, including the opportunities afforded by programmatic advertising – and the potential pitfalls from fraudsters working the field.

Hughes PR senior consultant Catherine Bauer is heading back into politics after a couple of decades out of the game.

Bauer was media adviser to senior minister and deputy premier Graham Ingerson in the Brown/Olsen Liberal governments from 1993-97 and will shortly join the Weatherill Government attached to Investment and Trade Minister Martin Hamilton-Smith’s office.

She replaces Matt Neagle who will head up the communications team at the SA Ambulance service.

Hamilton-Smith’s office confirmed the move when approached by InDaily today, saying the minister was sad to see the Neagle go, but welcomed Bauer’s return to politics.

Hamilton-Smith joined the Weatherill cabinet in 2014 after making the shock decision to abandon the Liberal Party that he once led.

Channel Nine’s Postcards is returning to local screens tonight, but in a very different format from the long-running show fronted by Keith Conlon.

The fully local Postcards was axed by WIN back in 2011. The new prime-time series will include stories from Western Australia, South Australia and Victoria, with Warren Tredrea heading the local content.

The one-hour programs will run on Fridays at 7.30pm.

A new survey has revealed the depths of the media industry’s gender equity problems.

The survey of 1000 women, conducted for the “Women in Media” project of the journalists’ union, the MEAA, shows that 34 per cent of women in the media don’t feel confident speaking up about discrimination in the workplace.

About half of those surveyed said they had been discriminated against,

“Many women are frightened about speaking out, because they don’t want to be seen as ‘difficult’,” she said.

“I urge all women in the media to lodge a complaint, if they are discriminated against on the basis of age, gender, race or pregnancy. The system should support them during this difficult time.”

Here are a few of the concerning quotes from those interviewed:

“Sexist bullying from male editor who was not punished, despite making a formal complaint.”

“If policies are mentioned, or someone raises a case of discrimination, the topic is laughed off and treated as ‘too serious’. It’s a situation of ‘lighten up, can’t you take a joke?’”

“The discrimination is often subtle, and no one wants to complain.’’

“I have been ‘advised’ not to go to HR if I have an issue… When I was bullied last year, I complained and nothing was done. That person has since been promoted.’’

“To raise instances of discrimination would harm career prospects.’’

The Daily Telegraph launched a classic tabloid campaign this week, giving the “political correctness gone mad” trope yet another outing. The articles, reprinted in The Advertiser and other Murdoch papers, were about University of New South Wales guidelines about language use in relation to indigenous issues. For example, it says that it is more appropriate to refer to the “invasion” of Australia, rather than its “settlement”. The stories quoted the noted historians Kyle Sandilands and Alan Jones.

Quite apart from the questionable use of these “experts”, it also challenges the concept of “news”. The guidelines being questioned were produced four years ago, and, as The New Matilda reports, were in turn based on a teaching guide produced 20 years ago.

This reporter remembers the concept of “settlement” being challenged in university history courses in the mid-1980s.

Amid the doom and gloom about the future of journalism, there is still plenty of resource-heavy, important investigative journalism going on. Increasingly, it’s collaborative, and there was another example this week. The Huffington Post and Fairfax Media exposed what they claim is a massive corruption scandal in the oil industry – a locally produced investigation which is having global consequences.