After months of speculation, the University of Adelaide announced today that Radio Adelaide will “transition” to an independent, not-for-profit organisation from July this year, with fellow community station Fresh 92.7 playing a hand in management of the new entity.

The university, which has owned and operated Radio Adelaide since it was founded in 1972, signed an agreement with Fresh 92.7 yesterday which will see the two stations co-located at the Fresh studios in Adelaide’s East End – at least for a while.

“The media training provided to our media students and the community will continue, and likely expand,” he said.

The longer-term future of Radio Adelaide, however, remains somewhat clouded.

Bebbington’s statement says that while the two stations would be co-located in the first instance, Radio Adelaide would move to new studios “in the future”.

“The agreement with Fresh 92.7 will see the registration of a new organisation that will continue to represent the educational community interest in Adelaide,” the university statement said.

Bebbington said the university would provide some funds to assist in the transition “but I would hope this leads to a revival of community sponsorship and subscription support for the station”.

Fresh general manager Troy Sincock said the arrangement was an opportunity for unprecedented collaboration in the community radio sector.

“We are in a unique position to assist to build the capacity of community radio, to share facilities and training opportunities for the benefit of Adelaide,” he said.

There is a potential stumbling block. The licence cannot be transferred from the university to a new entity without the approval of the broadcasting authority, ACMA, and there will be hurdles to clear. An organisation, for example, can’t hold influence over more than one licence.

The challenge for Fresh will be to convince Radio Adelaide’s community that this isn’t a takeover. They already feel that the university has ridden roughshod over their concerns.

“Grow up you sandal-wearing, lentil-bean-munching idiots”

Singer-songwriter John Schumann has had an almighty crack at opponents of a nuclear waste dump in South Australia, despite having once penned several songs critical of the uranium industry.

The former Redgum singer, writer of such anti-nuclear paeans as “Nuclear Cop” and “Long Run”, was on stage at the Fringe show of excellent local podcast The Adelaide Show when he let fly after the topic of a nuclear waste dump was raised.

“I think we need to grow up about that, absolutely,” he said. “This is bullshit.

“I remember when I first went to work for the Democrats, Meg Lees gave me a project, which was actually a test. She said there’s a discussion going on about a nuclear repository … write me a paper.”

Schumann sought the advice of eminent Adelaide University physicist Harry Medlin, who told him that a dump was a necessity given that radioactive material could be found “all over the state in drums and buckets and [the] back of sheds”.

“It really needs to be in one safe place. So I wrote this paper and said what Harry said – we really need to grow up and deal with it.

“Of course, all the other staffers – the holier-than-thou, Democrat, sandal-wearing , lentil-bean-munching idiots, you know, said ‘You can’t have him work for us – look what he believes’. I said ‘You know what I believe – you need to harden up, use your brains and just deal with this shit’.”

When challenged by host Steve Davis about some of his anti-nuke lyrics, Schumann said there was no inconsistency in his position.

“I don’t see that there’s any inconsistency in that at all.”

While he conceded that “the older I get I probably have changed my view a bit, as you do”, he wasn’t sure that a “full blown” nuclear industry was the way to go.”

“I think we really need to jump uranium and go to renewables – I mean, that’s the smart thing to do, and why we don’t do it is beyond me.”

He said he’d been down 2km mine shafts in South Australia’s outback and believed storing nuclear waste in such a place would be safer than any other location.

“Just grow up,” he threw in again, for good measure.

Listen to the full podcast and find details of the show’s upcoming Fringe performances here.

It’s been a huge week for media sins, covering the gamut of Australia’s major media organisations.

Here are some of the worst examples.

Fairfax’s Australian Financial Review provided some relationship advice, its print headline declaring that “equality is bad for your sex life”. Among the litany of dodginess is this line: “There is something ‘very unsexy’ about equality and that’s the problem feminism faces”.

The ABC’s Catalyst science program was lambasted by much of the scientific community for suggesting WiFi causes cancer. The program’s standing advice for a longer life seems to be: turn off the internet, and go make a pig lard sandwich (actually, there could be something in that).

The Advertiser gave us the front-page news that the bus priority lanes in the city are sneakily designed to give priority to buses over cars (who knew?). A few days later, its page-one splash advised us of the heinous plot by the Australian Defence Force to cater for the dietary requirements of its employees.

The hands-down winner, however, is the sub-editor at the Tiser (or who knows where else in the Murdoch production diaspora) who decided the following was a fitting heading on a David Penberthy piece about a program to stop the bullying of gay, lesbian and transgender kids at school. 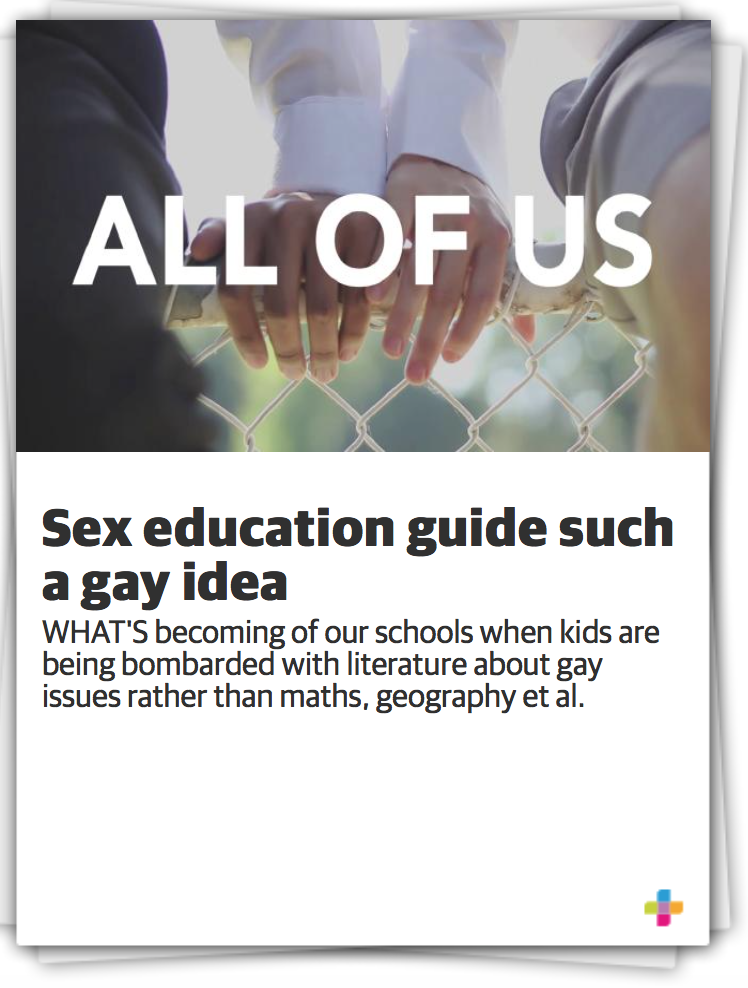 Thanks to Keith Conlon for pointing out that the National Library of Australia’s excellent collection of digitised newspapers – Trove – has been expanded this week. The searchable archive includes a stack of new early South Australian titles, such as the Australian Christian Commonwealth (1901-1940), the Border Chronicle (1908-1950), The Express (Adelaide, 1922-1923), the Port Adelaide News (1904, and 1913-1933), the Quorn Mercury (1895-1954) and many more.

Go here to view and search the newspapers.