More on Mumbrella in Adelaide

The Australian marketing chief for online content discovery company Outbrain has been confirmed for the upcoming InDaily/Mumbrella event about the future of digital communications.

Yoav Tourel, head of marketing at Outbrain ANZ, will join an expert panel at the event on March 31.

Tourel joined Outbrain in 2012 as the head of account strategy after a 13-year career in advertising, media and research.

Digital Futures will include an introduction from Mumbrella founder Tim Burrowes, who will then chair an expert panel discussion and an audience Q&A. The event will end with a networking opportunity for attendees.

To be held in the city from 3pm to 7pm, it will canvas the latest developments in digital communications.

As well as Tourel, the expert panel will include Eric Beecher, chairman of Private Media (the publisher of Crikey) and also chair of InDaily publisher Solstice Media, and Pippa Leary, CEO of APEX Advertising.

Tickets are on sale now. Click here to register.

The man behind the meme

Newly selected Liberal candidate for the seat of Adelaide, lawyer David Colovic, is not the first novice politico to run into strife in an interview with the ABC’s Matthew Abraham – and he won’t be the last.

This week the veteran ABC 891 broadcaster asked Colovic – a St Peter’s College graduate who is on the board of the school – what he would know about the less-privileged part of the electorate.

The answer was cringeworthy.

“I live just off Prospect Road and I often shop at the poor end,” he said in the interview on Thursday.

“I’ve ridden mornings through the barren streets of Kilburn. I’ve got a Costco membership card in my wallet. I’ve played and coached sport in Enfield. I know this electorate, particularly the northern aspect of it, as well as anyone.”

Labor jumped on the comments quickly and began disseminating an image (below) created by Abraham to promote his scoop on social media networks (the ABC has a nifty meme generator to assist in this process).

And it was shared by a heap of Labor types, including state minister Ian Hunter. 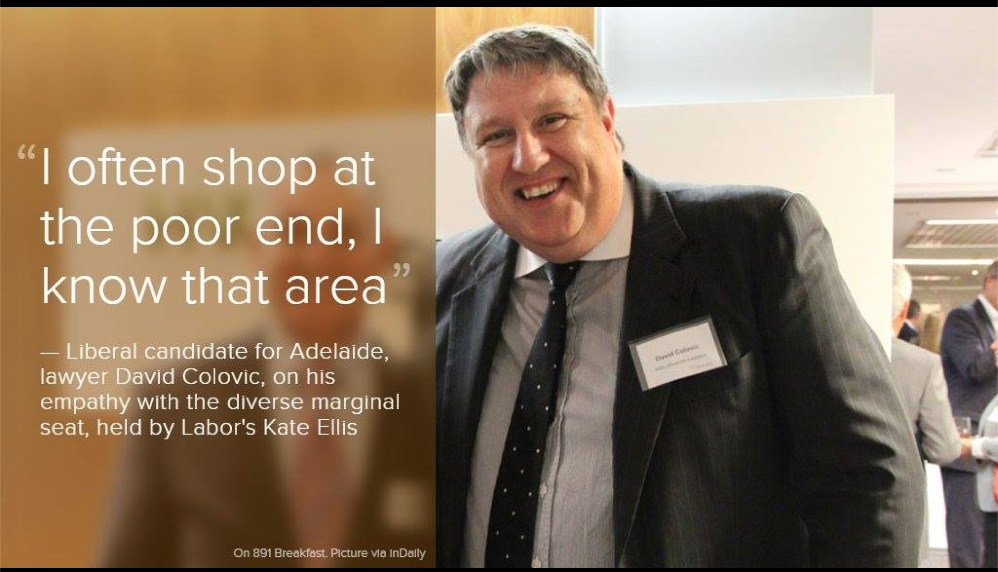 However, lots of people seemed to miss Abraham’s very next tweet, which mentioned that the obscured person with Colovic was someone we all know well. The photo was sourced from InDaily’s very popular iSpy section. 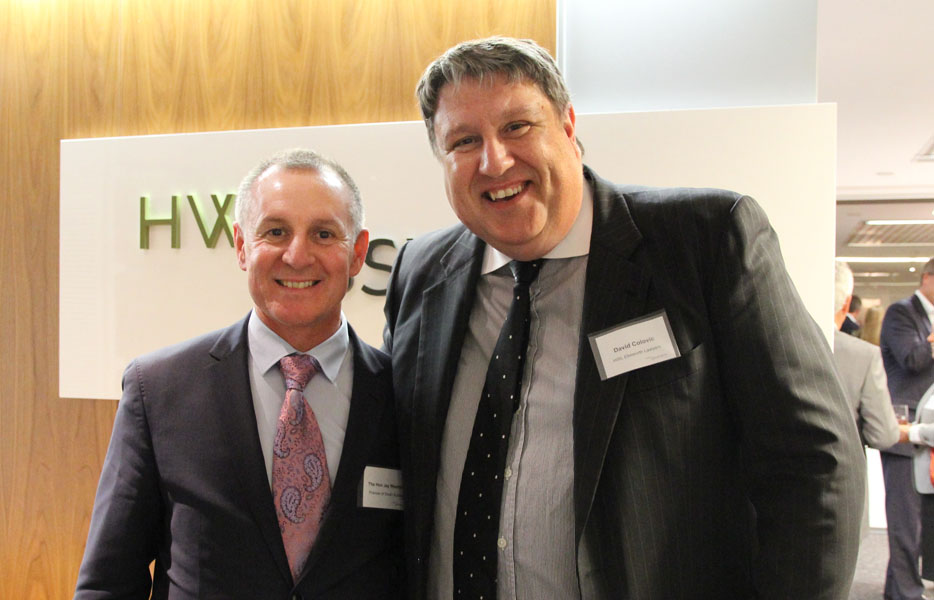 It’s rare when a media release contains more disclosure than the news story it feeds, but that was the case this week.

The Sunday Mail ran a story about housing affordability, pegged on the news that an American think tank, Demographia, had set up shop in Adelaide to lobby for solutions.

The local branch, headed by lobbyist and former Liberal minister Wayne Matthew, wants to deregulate the planning system to free up land for housing. Restricting land, the think tank argues, is the primary driver of high house prices.

What the story didn’t tell you – and Matthew’s media release did – is that Demographia is the brainchild of American consultant and academic Wendell Cox.

Cox is an interesting character indeed.

He is a well-known radical proponent of private car use, and is commonly characterised as an opponent of public transport and an enthusiast for urban sprawl – a characterisation that he challenges.

He is also a senior fellow of the Heartland Institute – a neo-conservative think tank which has driven much of the anti-climate-change positioning in American political debate. Heartland is tied up with the Tea Party movement, even publishing a public policy guide for Tea Party activists.

As the American website Sourcewatch puts it: “Cox is a vocal opponent of public transit and ‘smart growth’ policies, and his consulting firm runs the website Demographia, which advocates for fewer land-use regulations, and Public Purpose, which opposes public transport. He was characterized as ‘pro-sprawl’ by Sprawlwatch, to which Cox responded a more accurate characterization would have been ‘pro-American Dream’.”

Matthew told InDaily that Cox’s work on public transport was more about pulling apart spurious arguments in favour of public investment in mass transit, rather than opposition for the sake of it.

He said that Cox was very familiar with Adelaide – including our public transport system. In fact, Matthew believed Cox had influential input in Liberal frontbencher Diana Laidlaw’s policy development process before the 1993 state election – a process which led to the outsourcing of Adelaide’s bus network.

On Cox’s connection with the Heartland Institute, Matthew said that while “it would be no secret that his political thinking is certainly right of centre”, his work through Demographia was academic, not political.

You can judge for yourself about Cox’s views by reading his paper, Toward More Prosperous Cities.

A Valentine’s Day card to Adelaide

Why would anyone choose to live in Adelaide?

Ah, the perennial question from uppity Melbournites and Sydneysiders.

Adelaide video content agency RedBikini provides some of the answers in this short video, which it describes as a “love letter to Adelaide” on the eve of Valentine’s Day.

It was shot in Adelaide, of course, using South Australian actors.

It’s been another week of little news about the future of Radio Adelaide, despite the suggestion last year by Vice-Chancellor Warren Bebbington that the community station’s future would be sorted out in January.

He may be discovering that transferring a broadcasting licence from one entity to another isn’t straightforward, not to mention the need to find a new studio after the current building housing Radio Adelaide is demolished in June.

A spokesman said negotiations continue to progress with interested parties, with the university going through due diligence.

… and appoints a new media honcho

Meanwhile, the university has appointed a new media boss who, no doubt, will have some work to do on this issue.

Lachlan Parker, a former media adviser to Mike Rann and most recently a communications officer in the Attorney-General’s Department, will take up the role of deputy director, media and communications.

Parker effectively replaces communications manager Kate Husband, who didn’t apply for the new position and has decided to move on.

Adelaide’s Field Public Relations will handle the PR for the global LNG18 conference to be held in Perth in April this year.

The 30-year-old consultancy headed by former Advertiser finance editor John Field has something of a specialty in the resources sector, also managing media for the 1998 LNG conference – the first and only previous time the conference has been held in Australia.

He replaces James Wakelin, who returns to Nine a decade after he left to join rival Network Ten.

Wakelin, a Power supporter, started at Port Adelaide in 2013, just in time to catch the wave of success under coach Ken Hinkley.

For the record, McDonald is an Essendon supporter.

Media coverage of the horrific story about two backpackers being allegedly assaulted in the Coorong this week is being watched closely by the Director of Public Prosecutions.

A man has been charged with serious offences – an act that in the past would have led to a degree of circumspection in media reports. The reason for taking care is because of the risk of prejudicing a trial. That fear seems to have dissipated or, perhaps more accurately, has been overriden by other concerns – primarily the need to get out in front on a big story in a 24-hour news environment.

Media reports over the past 24 hours have been reflecting on potential past offences by the charged man, fuelled mostly by an SA Police announcement that they had set up a taskforce to investigate this very topic. While it skates close to the edge of prohibitions in the Evidence Act, the bigger question is whether such an announcement could prejudice the accused’s chances of a fair trial.

There have been other problems which have caused the Director of Public Prosecutions to issue a rare warning to the media.

Deputy Director of Public Prosecutions Ian Press has written to media outlets warning about a possible breach of section 71A of the Evidence Act, which prohibits the identification of an alleged victim or alleged perpetrator of a sexual offence. The issue that concerned Press was the publication of a pixelated, but nevertheless distinctive, image of an alleged victim. Strangely, no such warning was issued about the repeated publication of pixelated images of the alleged perpetrator.

SA media are in a difficult position. This state is well known for its oppressive use of suppression orders (and there are already several in place in relation to this case), so the understandable inclination is to push the envelope.

We shall see if the DPP’s concerns are deep enough to move beyond a warning.

The above item seemed too weighty and troubling to put in the corner this week. It’s also a matter of perspective best judged by readers: is the media behaving badly, is the Evidence Act outmoded, are the Police too gung ho, or is South Australia too keen to suppress details of alleged crimes?

The latest installment, 24 hours with Ninemsn editor Hal Crawford, is an insight into the pressures, decision-making processes and priorities of an editor in a media world dominated by real-time readership data.