The University of Adelaide has gagged staff of Radio Adelaide from talking to the media.

Radio Adelaide, which has been campaigning for its survival after the university released an options paper canvassing its closure, has been run by the university since it began more than 40 years ago.

Station management, until this week, have been available to comment in the media about the station’s position and advocate for its future. They’ve been far from scathing, while being assertive about the station’s value and the university’s previous commitments to keep it open and fund its move to new premises.

However, the university brought down the gag this week as it announced a surprise move to pitch the station to potential external owners.

The university says that allowing staff to speak publicly could undermine efforts to find new financial backers for Radio Adelaide.

“Negotiations continue with a number of interested parties, and an announcement will be made in January,” a university spokesman told InDaily.

“The registration of interest process – announced by the university earlier this week – remains open, and expressions of interest are welcomed by 24 December 2015 from any other organisations with the capacity to take a significant financial interest in the station.

“This is now a formal registration of interest process and the university is keen to ensure usual probity conditions are observed and that the privacy of the parties is protected. Even well-intentioned public comment can undermine the outcome of these efforts.”

Sixteen-year-old Adelaide conservative Caleb Bond was all set for a weekly column with one of the nation’s biggest tabloid newspapers, The Daily Telegraph, over summer – only to see the opportunity torn from his grasp.

Bond confirmed to Media Week that he had been set to replace syndicated News Corp columnist Andrew Bolt in the Tele on Thursdays over summer, but that would no longer be happening.

He’s being a little coy about the circumstances, saying that “as you’d know, things in the media change at the drop of a hat so that one isn’t happening”.

“But I will still be maintaining a relationship with the Tele and you’ll see columns pop up around the place, just not on the Thursdays as was planned.”

On Twitter, he suggested that someone, somewhere had undermined him (he also suggested that he wouldn’t be writing at all – a Tweet he later deleted).

The Guardian’s media column, The Weekly Beast, blames new editor Chris Dore, who started at the Tele on Monday.

Bond is building a multi-media profile from his home in the Adelaide ‘burbs. He has penned several columns for The Daily Telegraph and The Advertiser, appeared on Studio 10, and been interviewed on Sky News by Paul Murray and on Sydney talk radio station 2GB by Miranda Devine – also a conservative Tele opinion writer.

He has just completed Year 12 at The Heights School in Adelaide’s north-east and tells Media Week he is planning a gap year before continuing with his education.

He’s been in the media since he was six, when he made several appearances on the variety show Rove.

In October this year, he gave an interview to Vice magazine. His approach to their questioning was splendidly candid.

SA Lotteries sucked in a few SA media outlets this week with a story so meaningless that its media release even admitted as much.

The organisation put out its annual “lotto hotspots” announcement, which details where the lucky winners live in SA.

The whole exercise suggests that some suburbs are “luckier” than others, which is so obviously nonsense that SA Lotteries felt obliged to point out this fact.

“While some people are superstitious in deciding where they will purchase their entries from, it is important for players to remember that lotto is a random game of chance,” said SA Lotteries spokesperson Claire Taylor.

“Regardless of where a ticket is purchased, every number on every ticket has an equal chance of being drawn.”

This admission didn’t stop the Tiser issuing the following tease: 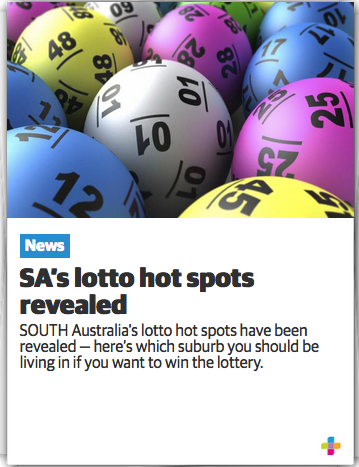 What we may be able to deduce from the data is that the areas with the highest prize amounts won are probably the areas where people buy the most lotto tickets.

And the top spots include northern Adelaide and Whyalla.

So it’s seems reasonable to assume that these areas – both struggling economically – also have more than their share of lotto-induced losses and misery.

The ABC traditionally pretends it doesn’t care about ratings, when in reality everyone knows it cares deeply.

The ABC’s national head of radio, Michael Mason, this week left no doubt about how he feels about the numbers game after combative local breakfast duo Matthew Abraham and David Bevan shredded their rivals in the final ratings survey of the year.

Congrats to Matt & Dave. Kings of Adelaide radio with an outstanding result today. I wish we could clone them. @KevCorduroy @DavidBevanSA

The other extraordinary performance for 891 was evenings presenter Peter Goers, who lifted his ratings by 2.8 points to now lead the pack. In the previous survey he was in fourth position.

The move of FIVEaa’s veteran presenter Jeremy Cordeaux from evenings to afternoons has given the station a boost after lunch, but it has cost it listeners after dark, losing 1.4 points to slip from first to third.

ABC 891 fill-in breakfast announcer Spence Denny interviewed musician and Cabaret Festival co-artistic director Ali McGregor this week, and threw in the classic question that no man is ever asked by the media.

“How do you get time to be a mum and a wife when you’re doing all this stuff?”

Warm Christmas wishes to all local journalists who have worked steadfastly this year to chase down stories which may not attract as many views as a rehash of last night’s reality TV, or the latest cat video, but bring important issues to light.

Some of the local reporters working in this vein include The Advertiser’s Lauren Novak, who has been given the time and editorial support to write dozens of stories about domestic violence, and InDaily’s own Bension Siebert, who has teased out the complicated details of the Transforming Health proposals over many months.

This week’s gong, though, goes to Radio Adelaide, and the way it has helped so many young reporters get a start in journalism over the years. It’s an increasingly tough career to get into, and Radio Adelaide continues to help aspirational journalists grasp the basics and develop their portfolio. Without it – and isn’t this a familiar story – young broadcasters would be better advised to move interstate to gain experience.

This is the final Media Week column for the year. It will return in January.