The 22 per cent reduction in income comes at a time when wine producers are battling rising costs for many major inputs including energy, diesel and fertiliser.

According to Wine Australia figures released yesterday, the 2022 national crush is estimated to be 1.73 million tonnes, 13.5 per cent below the record 2.01 million tonnes harvested in 2021.

The overall average value of wine grapes also fell by 10 per cent from $701 per tonne to $630 per tonne, driven by a 15 per cent drop in red grape prices.

South Australia’s production fell by 15 per cent to an estimated 889,254 tonnes but the state still accounted for 51 per cent of the national crush.

Many of the state’s other major regions including Barossa, Langhorne Creek, Coonawarra and Adelaide Hills were also well down on last year while Clare Valley bucked the trend to be up by 32 per cent after an improved growing season. 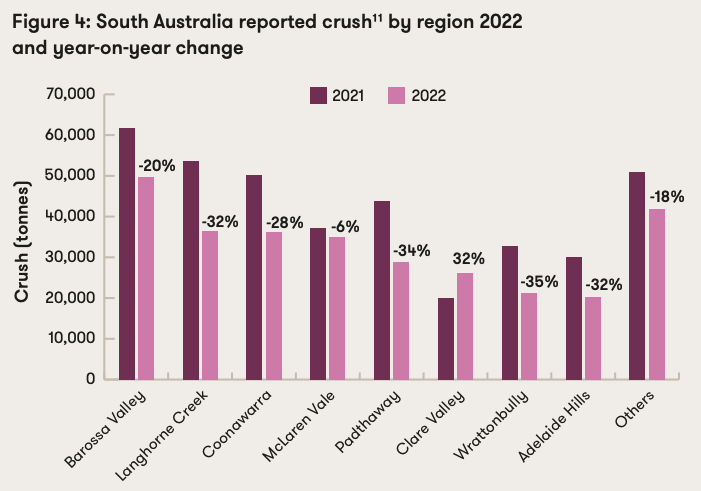 Although the crop is well down on the bumper 2021 harvest, it is only 2 per cent below the 10-year average of 1.78 million tonnes.

It also comes at a time when wine inventory levels in Australia are at their highest in more than a decade following the bumper 2021 vintage and reduced exports as a result of crippling tariffs on Chinese imports of bottled Australian wine.

Wine Australia said the reduction in crush compared with 2021 was the equivalent of approximately 190 million litres of wine – more than the most Australia ever exported to mainland China in a 12-month period.

He said this “natural variation” was compounded by heavy spring and summer rainfall across much of eastern Australia and a number of significant hailstorms.

“Apart from seasonal effects, the 2021–22 season was challenging as a result of winery production capacity limitations going into vintage following the record harvest in 2021, compounded by reduced exports to mainland China and severe shipping disruptions that caused delays and escalated costs,” Bailey said.

“Lack of winery production capacity, together with reduced exports and softening prices for red wines, may have resulted in wineries and growers reducing their overall production and/or intake of grapes – particularly red varieties.” 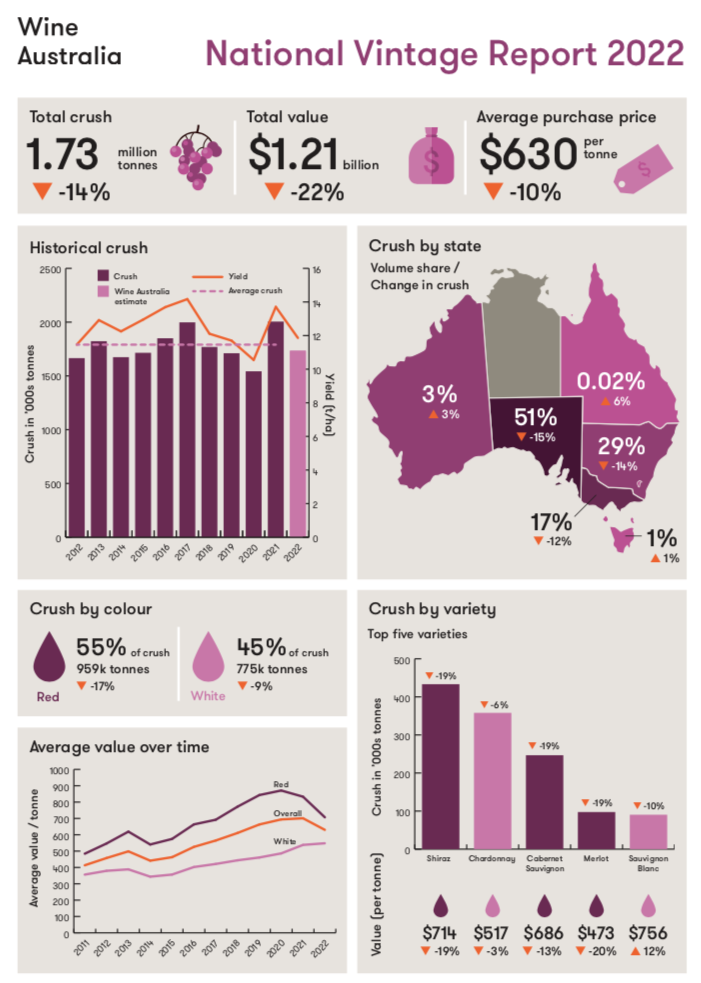 The average value for red winegrape varieties has declined for the past two years from a peak of $871 in 2020, but looking across a five-year perspective, it was higher in 2022 than it was in 2017 and 46 per cent higher than it was in 2011, the last time Australia experienced a wine glut.

However, the average value for white winegrapes continues to rise, increasing 2 per cent to $548 per tonne – the highest level since 2008.

“Experiences differed across the country but there is no doubt that some grape growers have had a very tough year, with seasonal conditions and profitability hit by the significant reduction in red winegrape prices combined with escalating costs including fuel, fertiliser and energy,” Bailey said.

“Looking forward from this vintage, growing demand through the joint strategies of market intensification and market diversification is the key to ensuring sustainable winegrape prices.”

In the latest quarterly figures released in May, South Australian wine exports reached $1.398 billion in the 12 months to March 2022, up $22 million on the $1.376 billion worth of wine exported in the year to December 21.

“Pleasingly, data is showing that there is demand for Australian wine in our major export markets such as the United States and the United Kingdom, particularly in premium price segments,” Bailey said.

“There is also growth in a range of Asian markets, including Singapore, Japan, South Korea, Vietnam, Thailand and Taiwan.”