Reade, who in April lost his job as the state’s most senior bureaucrat amid Labor’s post-election public service shake-up, will take the reins at the RAA on August 1.

The former BankSA CEO will replace long-time RAA boss Ian Stone, who announced in February he would be stepping aside after 15 years as chief executive.

“Nick brings highly sought-after leadership experience in the delivery of large-scale technology solutions and development of customer-centric products and services,” Siebels said in a statement.

“It was incredibly important to the Board to find another great leader who shares RAA’s values, culture, and commitment to improving the lives of members and the community.”

Prior to his move into the public sector, Reade led Bank SA and the Westpac Group in SA from 2014 to 2021, and played a leading role in lobbying against the former Weatherill Government’s bank tax. 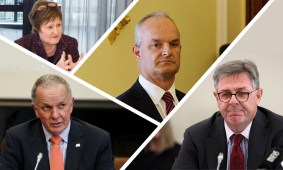 His career in the banking sector also included senior roles with CommSec and ANZ.

Former Premier Steven Marshall picked Reade to head up the Department of Premier and Cabinet from February 2021, but Labor’s March election victory saw his tenure as the state’s most powerful bureaucrat cut short.