Oz Minerals announced to the market on Monday morning that Carrapateena production had been hampered in the June quarter by belt damage to its material handling system and equipment availability issues.

This has resulted in it lowering its copper guidance at Carrapateena by 13 per cent for the 2022 calendar year. It also coincides with falling global copper prices in recent weeks.

Group all-in sustaining cost guidance has been increased by 17 per cent due to the lower production combined with current cost increases of about 8 per cent, driven by rising labour, transport, fuel, explosives and ground support costs.

The company also has a copper mine in Brazil’s Carajás province, which is on track to produce at the higher end of its unchanged guidance range.

Gold guidance remains unchanged across its three mines despite a fall in production in the March quarter, which has been balanced by strong gold prices in recent weeks.

The Prominent Hill remediation plan has resulted in quarter-on-quarter production improvement and annual copper production is expected to be at the lower end of the tightened full-year guidance range.

However, Carrapateena’s remediation plan has been adversely impacted by further conveyor belt issues on the material handling system that has led to a 4300-tonne reduction in copper metal produced as well as ongoing resourcing and supply chain issues impacting equipment availability. 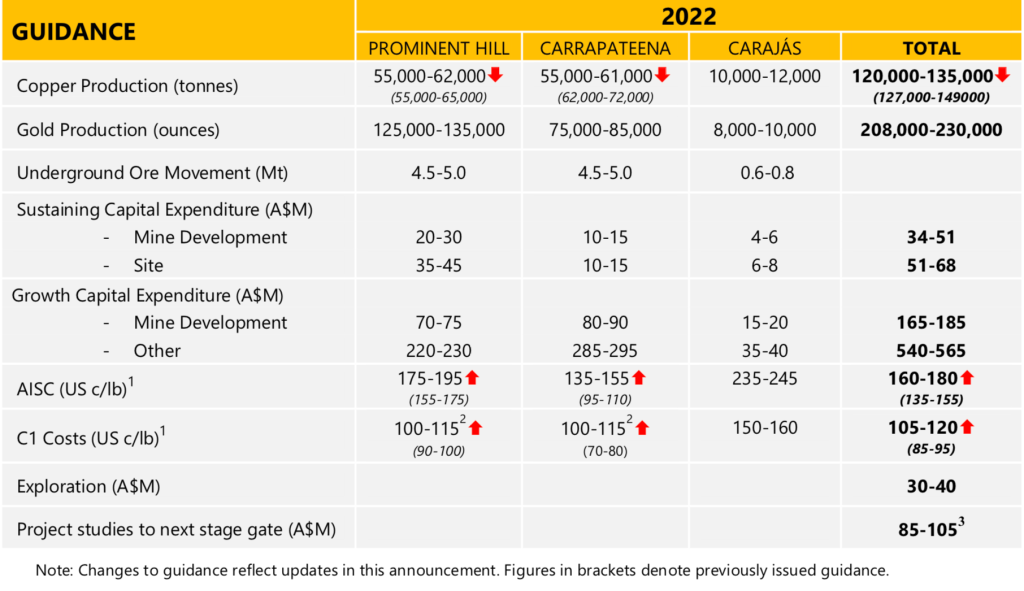 “Opportunities have also been identified in a re-set plan to achieve greater operational consistency and reliability, including improving equipment availability and resourcing.

“At Carrapateena we continue to balance short-term production goals while prioritising cave management to preserve and maximise the mine’s multi-decade value.

Fellow Australian miner BHP, which operates the Olympic Dam copper-gold mine in South Australia, has had more than 12 per cent shaved off its share price since June 8.

The benchmark S&P ASX200, which includes Oz Minerals and BHP, has lost 5.8 per cent during the same period.

The gold price has surged again this year and has remained steady in the past fortnight to be $2655 per ounce late yesterday.