The company behind a solar thermal demonstration plant in Port Augusta has agreed to buy half of the Aurora Energy Project from Adelaide firm 1414 Degrees, potentially fast-tracking its development.

Vast Solar has entered into a share sale agreement to buy 50 per cent of the shares in Silicon Aurora for $2.5 million, which will be jointly owned by 1414 Degrees.

Under the agreement, Vast Solar will pay $2.5 million in two instalments, an initial $1 million and a further $1.5 million following an ElectraNet transmission connection agreement and AEMO approval to connect to the National Energy Market.

The Aurora project has development approval for a 140MW battery energy storage system (BESS), 70MW solar-voltaic array and 150MW concentrated solar power generation as well as a 275kV ElectraNet connection to the grid.

It is on the same site 30km north of Port Augusta that Californian company SolarReserve announced in 2017 it would build a 150MW molten salt solar thermal plant, which at the time was touted as the biggest plant of its kind in the world with the ability to supply about 5 per cent of the state’s power.

But the project fell over in 2019 after SolarReserve failed to secure finance. Adelaide-based 1414 Degrees acquired the project in November 2019 for $2 million.

1414 Degrees had previously entered into an exclusive MoU for the project with potential investor Ovida before the Jemena Group subsidiary walked away from the project in April.

A few weeks later, Sydney-based Vast Solar was approved for up to $110 million in loans from the federal government for its 20MW concentrated solar thermal power (CSP) demonstration project in Port Augusta.

“Partnering with Australian storage technology company 1414 Degrees to deliver the 140MW BESS project and our world-leading modular tower CSP technology in Port Augusta is a terrific development for Vast Solar,” he said.

1414 Degrees CEO Matt Squire, who will soon leave the company after resigning from the role last month, said the transaction brought together two innovative companies that shared a long-term vision for the Aurora project.

“In addition to accelerating the development of our stage 1 BESS, the Aurora site may also act as a showcase for the establishment of exciting renewable technologies being developed by Vast Solar and 1414 Degrees,” he said.

Meanwhile, 1414 Degrees will hold an extraordinary general meeting on July 28 to review the composition of its board after the company’s largest shareholder and former executive chairman questioned the “poor performance” of the company’s leaders.

Dr Kevin Moriarty says a number of the company’s 3650 shareholders are “expressing dismay” with the way the company is communicating its progress.

Moriarty this month lodged a 249D notice calling for a general meeting of the company to propose the removal of three directors, including chairman Tony Sacre, and the appointment of himself and Ian Burdon as company directors.

Funding of $250,000 has been awarded to assist in the drilling of two copper-gold targets in the Olympic Domain near Woomera.

It is also close to Oz Minerals’ Carrapateena copper mine and BHP’s Oak Dam West prospect.

A second grant of $65,500 has been awarded to co-fund a deep Electro-Magnetic (EM) geophysical survey on the Company’s Mabel Creek Project, which is prospecting for both iron-oxide copper-gold and silver-lead-zinc mineralisation.

The grants were awarded as part of the government’s Accelerated Discovery Initiative, which aims to speed up mineral discoveries in the state through innovative exploration and research projects. 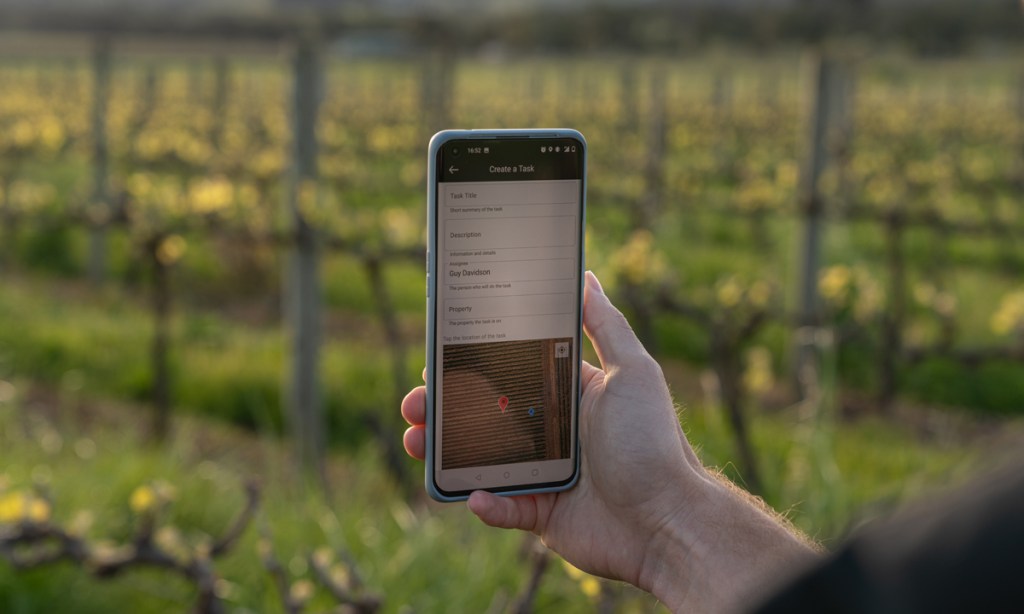 A smart app designed to help agriculture businesses manage biosecurity issues and streamline complex functions has recently launched in South Australia and is gaining traction in the viticulture industry.

The app was developed by New Zealand Agritech start-up Onside and has around 35,000 registered users across a variety of agricultural sectors, including wine, fruit and cattle in its home market.

Onside Co-Founder and CEO Ryan Higgs said South Australia’s diversity in agribusiness including grapes, almonds, citrus and vegetables convinced the company to begin its Australian expansion in the state.

“I experienced first-hand how difficult it was to keep track of who was on our farms, what they were doing, how to get in touch with them and whether they had all the information they required,” said Higgs, who began Onside six years ago.

“What started out as a simple check-in, visitor management and health and safety tool has since evolved into a comprehensive operations app for all rural sectors that cuts down on paperwork and provides real-time crucial information on everything that is happening on the property.”

Iconic SA wine company Yalumba has been using Onside to help improve biosecurity efficiencies on the ground at eight sites in the Barossa and Eden Valley.

Viticulturist and Technical Manager Brooke Howell said the winery has had issues in the past with not knowing who was on site, which made adherence to biosecurity protocols a significant challenge.

“The Onside app has provided us with a solution to keep real-time track of everyone on the ground across all our sites,” she said.

“It captures essential information to ensure the safety of our vines and visitors, particularly when it comes to the spread of Phylloxera which is a major threat to our vines in the Barossa.”

Brisbane-based mining company Hawsons Iron has signed an MoU with Flinders Ports to co-operate on the design, construction and operation of a greenfield port on South Australia’s Yorke Peninsula.

The company is looking to develop the port at Myponie Point, just north of Wallaroo for the export of 20 million tonnes of magnetite concentrate per year.

The MoU, announced last week, coincided with Hawsons’ endorsement of a Bankable Feasibility Study to develop a magnetite mine near Broken Hill in New South Wales.

The listed company is now focused on securing a mining lease and commencing production by mid-2024.

The development of the mine would include a dedicated underground slurry pipeline to a deep-water port export facility at Myponie Point.

“There is also an exciting opportunity for Hawsons to participate in the future growth of the Port as its ‘cornerstone’ customer,” he said.

Flinders Port Holdings CEO Stewart Lammin said the Hawsons project was an exciting prospect that aligned with the port operator’s aim to develop sustainable supply chains that meet the growing expectations of the market.

“The MOU with Hawsons is another example of our commitment to facilitating large-scale export projects from South Australia, including exploring the development of new ports where necessary,” he said. 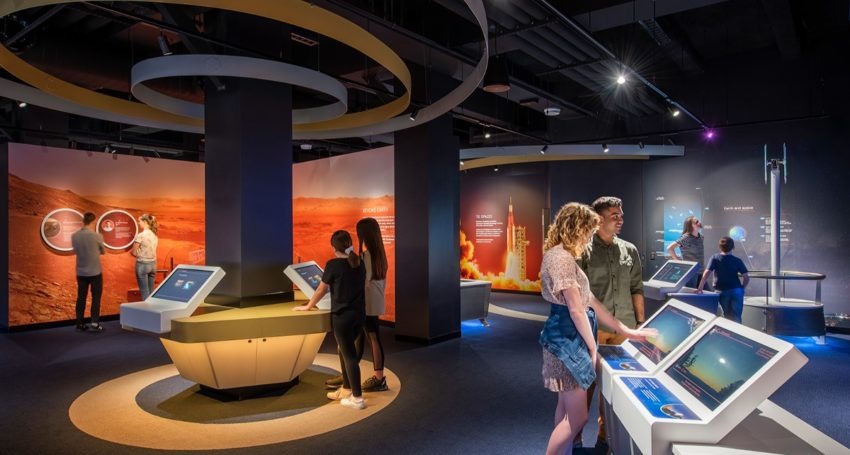 The Space Discovery Centre at Lot Fourteen in Adelaide.

A primary school program in collaboration with South Australian education technology company Makers Empire that utilises design challenges to expose students to space innovation is launching in schools across the state.

Two to five teachers from each school will train with subject-matter experts who will share how space technology is being used to solve problems on earth.

The program, which is sponsored by the Andy Thomas Space Foundation Education Fund, will use Makers Empire’s 3D printing and app-supported development resources.

“It engages them in STEM learning connected to real-world problem-solving to gain an understanding of some of the pathways to a career in space,” he said.

A separate secondary school program is coordinated by Hamilton Secondary College and facilitates the use of the Aldrin Foundation’s Giant Mars Map to engage students in a deeper understanding of space travel.

Principal of Hamilton Secondary College, Peta Kourbelis, said she was excited to see that the range of projects proposed by schools is increasingly innovative.

“More rural schools are involved, allowing students from throughout South Australia to find out about the amazing opportunities available in the rapidly expanding space sector,” she said.

“With clearly identifiable pathways available for students interested in and passionate about the Australian Space industry, we are proud to play our part in supporting this growth and producing the next generation of leaders for the sector,” Sasanelli said.

“Adelaide, and especially the Discovery Centre at Lot Fourteen, will be the epicentre of this program, and we have the ambition to take this nationally to more than 80 schools around Australia.”