The share price of South Australian mining and exploration company Havilah Resources doubled in minutes yesterday after the deal with Oz Minerals was announced.

Under the conditional binding Terms Sheet with Havilah Resources, Oz Minerals will have a study period of up to 18 months to evaluate the potential of the Kalkaroo project and the option to acquire 100 per cent of it for a purchase price of $205 million.

In addition, the agreement provides a deferred contingent consideration of $65 million, upon a 30 per cent uplift in Kalkaroo’s Measured and Indicated Resource estimate as well as a copper price linked contingent payment in each year of production up to a maximum cumulative amount of $135 million.

The project is in the Curnamona Province in the north-east of South Australia, between Yunta and Broken Hill, within close proximity to a major highway and rail corridor.

The deal with Oz Minerals is subject to Havilah shareholder approval within 90 days, which its board has unanimously recommended is in their best interests.

Havilah’s Technical Director Dr Chris Giles said the strategic alliance with OZ Minerals aimed to harness the respective skills of both companies to explore and develop Australia’s next great copper region in the Curnamona Province.

“Exercise of the Kalkaroo Option by OZ Minerals would result in monetisation of Kalkaroo and provide what we believe is a fair return for our shareholders without Havilah taking on the longer-term development and financing risks inherent in a large new mining project at this time,” he said.

“Funding provided under the Strategic Alliance would allow us to accelerate exploration for new copper deposits in the region that could potentially be additive to Kalkaroo, as well as advancing our other promising mineral projects south of the Barrier Highway.” 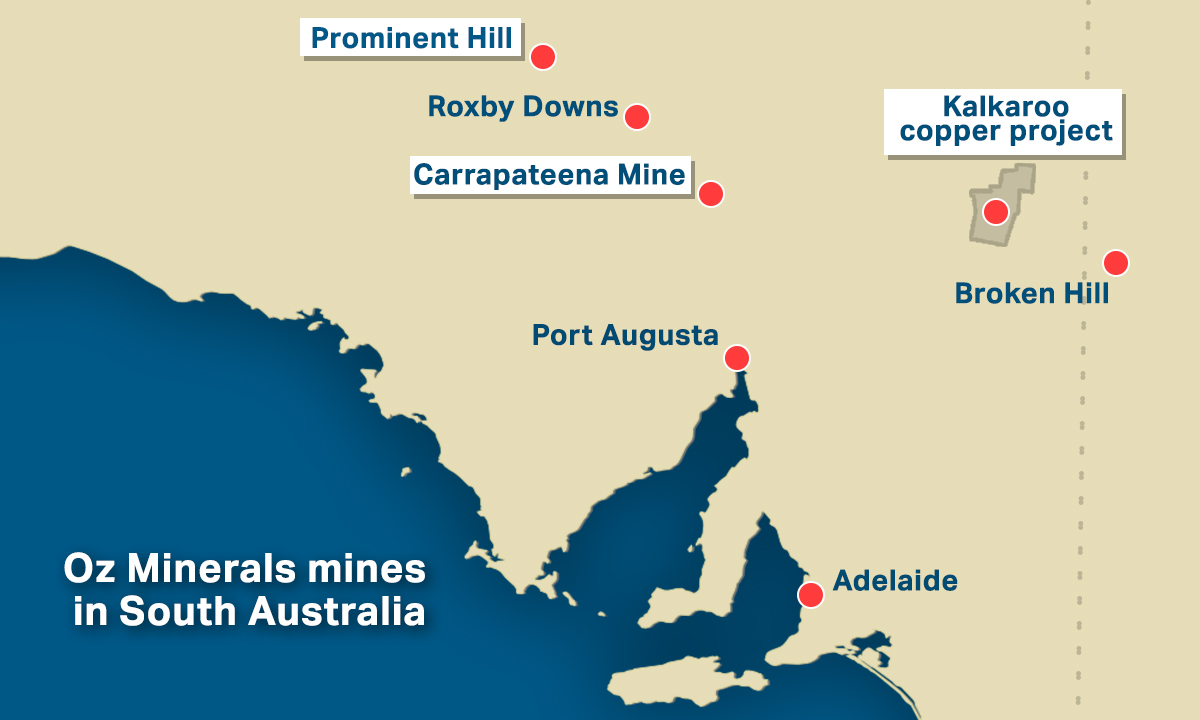 OZ Minerals will pay Havilah $1 million per month during the 18-month alliance period, with 50 per cent of the payments directed towards Havilah identifying and advancing nearby exploration opportunities within the Curnamona Province. Including the monthly payment, OZ Minerals expects to spend up to $76 million during the period to undertake studies and for exploration activities at the Kalkaroo project and on alliance activities.

Havilah also has a large copper-cobalt-gold exploration project at Mutooroo about 100km south of Kalkaroo on the southern side of the Barrier Highway.

After listing on the ASX in 2002, Havilah acquired a 1000sq km Kalkaroo exploration tenement in 2003 after a decade of earlier exploration by Placer, Newcrest and MIM.

In 2010, Glencore funded a $14 million pre-feasibility study but did not proceed.

After five years of depressed copper prices post-GFC to 2016, Havilah undertook further drilling to advance the mineral resource estimate. It was granted a mining lease in 2019 and completed a further PFS supporting a large-scale copper-gold project.

Havilah’s share price more than doubled following yesterday’s announcement from an opening quote of $0.16 to $0.33 in the first hour of trade before closing at $0.30 to give it a market cap of more than $50 million. It is the highest the company’s share price has been since 2017.

It is also expected to make a final investment decision on its West Musgrave project in Western Australia later this year.

“The agreement provides a low-cost option and flexibility to study the Kalkaroo project while retaining the optionality to acquire 100 per cent of the project for a fixed acquisition price together with any deferred contingent consideration,” he said.

“We believe our approach of taking projects from an early study phase through development and into operation can unlock significant value for our stakeholders, something we have demonstrated with Carrapateena, now in its third year of operation, and continue to show with West Musgrave as we approach a final investment decision on the project later this year.”

Strong copper prices and increasing production helped Oz Minerals to a record net profit of $531 million for the 2021 calendar year.

Oz Minerals formed in 2008 and began mining at Prominent Hill about 650km north of Adelaide in 2009.

It produced its first concentrate at Carrapateena, about 250km south-east of Prominent Hill, in late 2019.

The listed company’s share price has risen from about $10 three years ago to more than $27 last month with a market capitalisation of $8.8 billion.

However, COVID-19 impacts on its workforce and severe flooding in the north of South Australia have led to a much slower start to 2022.

This coupled with reduced copper prices in the past month has resulted in its share price easing back to $22.03 yesterday, despite gaining two per cent following the Havilah announcement.

Oz Minerals was ranked No.2 behind Santos in InDaily’s 2021 South Australian Business Index of the state’s top 100 companies.