The lost production comes as the emerging South Australian company seeks to increase sales volumes at a time of strong prices.

Gas from Cooper’s Sole gas field in the Gippsland Basin off the Victorian coast is processed at the Orbost Gas Processing Plant in East Gippsland, which is owned and operated by APA Group.

A planned nine-day shutdown began on March 26 but heavy rain and associated flooding in the region have caused delays to the works due to road closures and power outages in the region impacting logistics and works on site.

“At this time access to the plant is restricted due to floodwaters along the access road,” Cooper Energy said in a statement to the ASX on Wednesday.

“All non-essential personnel have been safely evacuated from the plant.

“The extent of the slippage to the start-up will be assessed once the floodwaters recede and personnel can return to the plant.”

The shutdown is to allow the installation of a gas polishing unit and components of a sulphur removal package.

Leading up to the shutdown, the plant was achieving a processing rate of 55 terajoules of gas a day, or 55,000 gigajoules.

The Orbost plant is on Victoria’s south-east coast near Lakes Entrance and has been plagued with issues since Cooper began using it to process gas from its new Sole gas field in the Gippsland Basin in early 2020.

APA upgraded the plant to process gas from Sole in 2020 but it is yet to achieve the nameplate capacity of 68TJ/day.

The plant’s performance has been impaired by foaming and fouling in the sulphur recovery unit’s two absorbers, which has reduced processing rates and required regular maintenance and cleaning.

In March the average gas price in the Victoria and Sydney spot markets was $10.33/GJ and $10.98/GJ respectively. 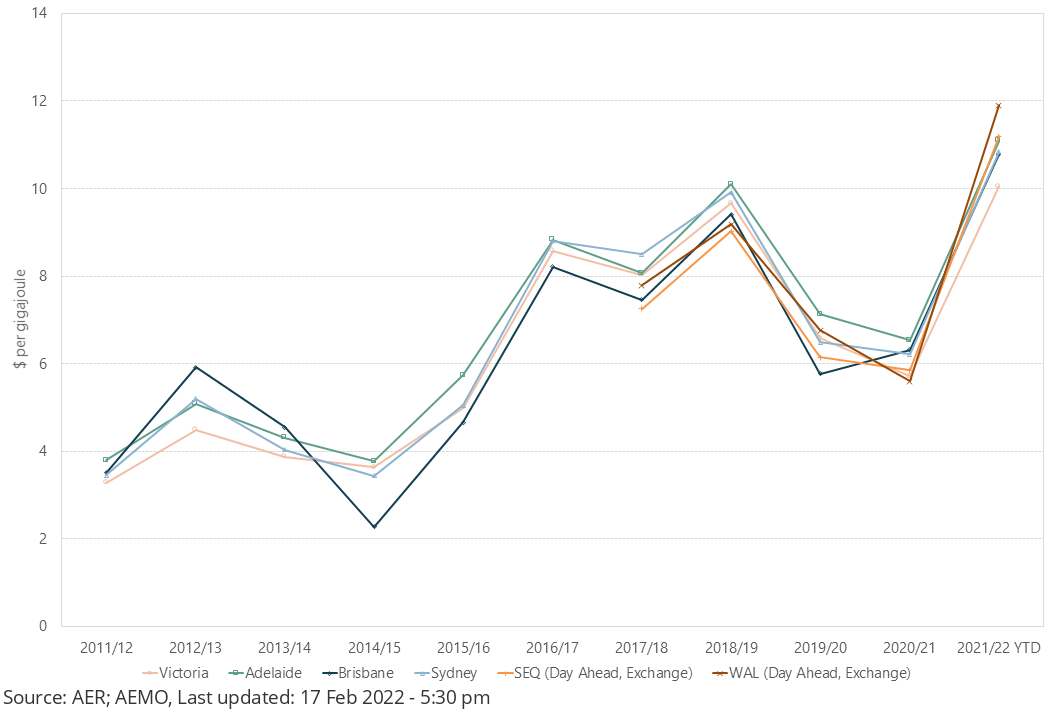 Cooper Energy sold 449,000  GJ of production surplus on the spot market in March.

The company operates and owns 50 per cent of the Athena Gas Plant and associated Casino Henry Netherby (CHN) gas fields in the Otway Basin in western Victoria and South East South Australia.

The average processing rate at the Athena Gas Plant was 29.4 TJ/d in March, 10 per cent higher than the February rate of 26.8 TJ/d.

It also has production wells in South Australia’s Cooper Basin in partnership with Beach Energy.

Cooper Energy listed on the ASX in 2002 and has steadily grown production and reserves in line with rising prices from 0.96 million barrels of oil equivalent (MMboe) in 2016 to 2.63 MMboe in 2021.

The company also commenced sales from its Athena Gas Plant in Victoria in December.

It has so far secured four separate natural gas exploration opportunities, leading to three significant gas discoveries, two in the Cooper Basin and one in the Otway Basin.

However, its share price fell almost 20 per cent earlier this week when it informed the market that it was abandoning an oil exploration well in the Perth basin.

The Cervantes-1 well was drilled in partnership with Metgasco and RCMA Australia.

In an announcement to the market on Thursday, Vintage said the well would be plugged and abandoned after reaching total depth and failing to encounter hydrocarbons.

While the state’s smaller producers are facing some short-term challenges, their larger SA counterparts Santos and Beach Energy are performing solidly.

The Adelaide-headquartered oil and gas producer said the results reflected significantly higher oil and LNG prices due to the recovery in global energy demand.

Beach reported a first-half profit of $213 million in February, a 66 per cent improvement of the previous year.

Beach average realised gas price per GJ of $7.54, up 5 per cent on the previous year.