But the Angaston company is not taking any chances with its succession plan, already announcing that Karl Martin, who has been on the staff for 27 years, will take the reins.

Waterman is also SA Wine Industry Association president but his path into the wine industry is somewhat unorthodox.

He spent the first 18 years of his career in the IT industry before starting with Yalumba in June 2003 as general manager of Yalumba’s importing business Negociants Australia.

A four-year stint as director of strategy and trading at Samuel Smith & Son followed before becoming Yalumba COO in 2014 and CEO the following year.

Yalumba chairman Robert Hill-Smith said while Waterman’s departure will come a little earlier than expected, he will leave with the company’s best wishes.

Hill-Smith said Waterman will also step down from Yalumba’s board of directors in September but was fully committed to continuing his strong work ethic until his departure.

“He has approached the CEO task with incredible stamina, loyalty, resilience and intelligence and we are in many ways a transformed wine company that now thanks to him, is set to drive our aspirations with confidence,” he said of Waterman.

During his time as CEO at Yalumba, Waterman oversaw distribution to 52 countries and drove strategy for international expansion with significant results in Japan and China.

But the 173-year-old Barossa wine business is not taking any risks with its succession plan. The board has unanimously appointed Martin as the new CEO and MD.

“Karl has been a member of the Yalumba family for over 27 years and served in a number of finance, support and executive roles in four different countries before taking on the role as Executive Director – Commercial in 2010,” Hill-Smith said.

“He has excelled in this role, supported our CEO and driven change which we must continue to explore and implement.” 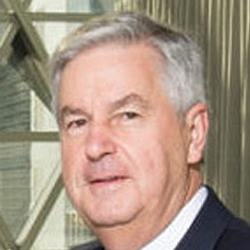 “That our CEO can plan his transition out of the role and induct his successor is welcomed and … augurs well for our future.

“Nick retires with our best wishes, and I am sure he will find some exciting and challenging opportunities are afforded him as he pursues roles in business outside our company post-September.

“Change and renewal are a constant in the business world and our family-owned wine company is no different.”

Scarce was inducted as a Baron of Barossa in 2013 and is a highly accomplished advisor with specialist knowledge in governance, mergers, and strategy.

His current Board positions include deputy chair of Seeley International, chair of Adelaide Oval, Operation Flinders, and Novita, and a board member of APC Technology.

“I am delighted to be joining Barossa Australia at such a pivotal time in the region’s growth and development,” Scarce said.

“While the grape, wine and tourism sectors have faced numerous challenges over the last two years, there is also great optimism around the growth potential, particularly as the region moves forward with a collective purpose and intent.”