The merged company, which is headquartered in Adelaide and retains the Santos name, had a combined market capitalisation of more than $24 billion to put it just inside the top 20 Australian listed companies by size.

It is also in the 20 largest global oil and gas companies and led by previous Santos managing director and chief executive officer Kevin Gallagher.

In a statement to the Australian Securities Exchange this morning, Gallagher said the company’s strong base business performance positioned it to benefit from higher commodity prices.

“Our disciplined, low-cost operating model continues to drive strong performance across the business and has positioned us to take full advantage of the increase in commodity prices,” he said.

“The completion of the Oil Search merger delivers us the size and scale to deliver even stronger outcomes in 2022 and beyond.

“I was particularly pleased that we were able to complete the merger before the end of 2021 and in just 130 days from the announcement of our intent to merge with Oil Search, and this sets us up for what is going to be a very busy 2022.”

Santos last year approved a number of projects that are expected to take shape in 2022.

Santos and Beach Energy announced in November they would push ahead with the $220 million Moomba carbon capture and storage project in South Australia’s north-east. 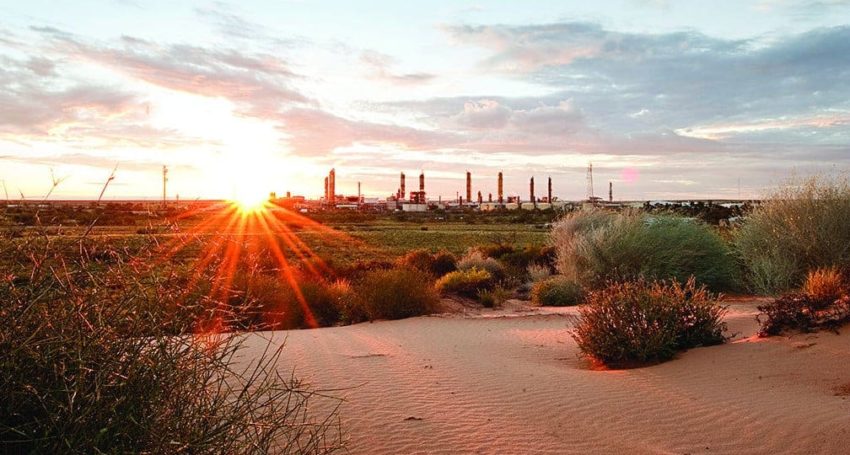 The Cooper Basin operations of Santos span the border in the north-east of South Australia and south-west of Queensland. Picture supplied.

The plant is expected to store about 1.7 million tonnes of carbon per year from 2024.

“Consistent with our strategy, our next stage of growth will be disciplined and phased,” Gallagher said.

“The Barossa project is 20 per cent complete and making excellent progress, while I was delighted to announce the final investment decision on the Moomba carbon capture and storage project in November.

“Our merger with Oil Search delivers increased scale and capacity to drive a disciplined, low-cost operating model and unrivalled growth opportunities over the next decade – with a vision of becoming a global leader in the energy transition.”

With its origins in the Cooper Basin, Santos has one of the largest exploration and production acreages in Australia and extensive infrastructure.

Prior to the Oil Search merger it was already Australia’s largest domestic gas supplier and it now aims to be a leading Asia-Pacific LNG supplier.

Santos was confirmed as the state’s largest company in October when it was ranked No. 1 in the InDaily 2021 South Australian Business Index.

The subsequent merger with Oil Search is likely to further strengthen that position in 2022.