Reserve Bank assistant governor Luci Ellis effectively posed that question in a speech to the Committee for the Economic Development of Australia on Thursday.

Dr Ellis did not, could not, have the answer, but she did warn which path the global economy takes will depend on the choices we collectively make, the stories we tell ourselves about the pandemic experience and the lessons we can learn about people and businesses successfully adapting.

Implicit in the speech was an indictment of risk-averse management and unhelpful government policy as she sought reasons for the lacklustre economy leading up to COVID.

Capitalism’s “animal spirits” were hard to find, both here and globally.

“In the decade or so leading up to the pandemic, there was a nagging sense that these engines of prosperity were running out of steam,” Dr Ellis said.

“Investment was low; productivity growth was lagging; and many of the behaviours we associate with business dynamism were on the decline.”

Particularly in Australia, businesses held on to cash, business investment declining as a percentage of the economy. 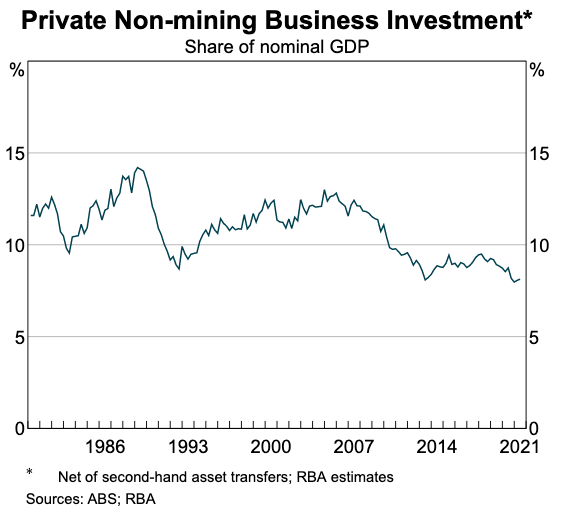 Labour productivity weakened after the GFC and, ignoring the “businesses” theoretically formed by individual Uber drivers and such, business formation and exits were lower than they were earlier this century.

Job mobility continued to fall – an indicator of individual insecurity, people not being prepared to risk moving jobs for a better opportunity or higher pay. 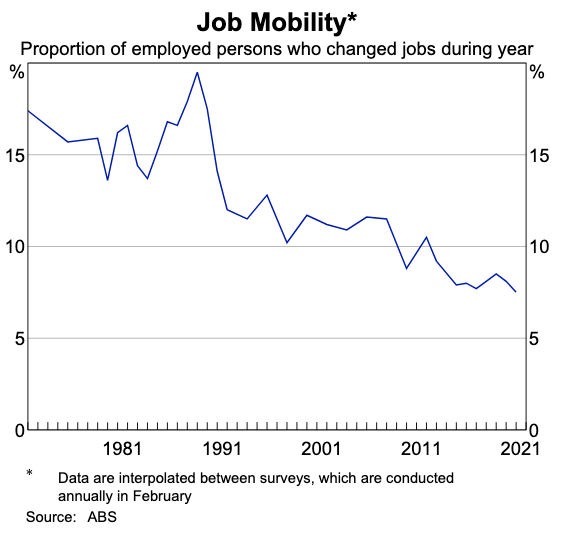 None of the various proffered explanations – more complex technology, “superstar” firms, increased barriers to entry – could fully explain the phenomenon.

What didn’t explain it was the oft-heard claims of labour being too expensive.

“If labour were too expensive, why wouldn’t firms invest in labour-saving innovation?” Dr Ellis asked.

“And if costs were rising for all firms, why weren’t prices rising faster?

“You could instead speculate about a misplaced perception that costs are too high, leading to downward pressure on growth in labour costs.

“If, as a result, labour becomes cheap relative to productivity, firms would have less need to invest, because the payoff to labour-saving technology is lower.

“Even that hypothesis is a bit unsatisfying, though, because it doesn’t explain the lack of disruption.

“Why aren’t more new firms coming in, willing to attract workers by paying higher wages, and investing their way to higher productivity of that labour?”

Dr Ellis suggested the GFC changed the perception of risk and the desire for safety.

“Some of that desire for safety was a necessary counterbalancing after a period of excessive risk-taking in the global financial sector. But it’s entirely plausible that the change in financial behaviour influenced risk perceptions and decisions in the corporate sector more generally.

“And if perceptions of risk increase, people will want payoffs on investment projects to be further above the cost of finance. And that is exactly what has happened.

“Hurdle rates on investment projects have remained high even as interest rates and the cost of capital have fallen.”

The graph Dr Ellis supplied shows the hurdle rate – the expected return on investment businesses demand before putting their hand in their pocket – has barely moved despite the long slide in the cost of money. 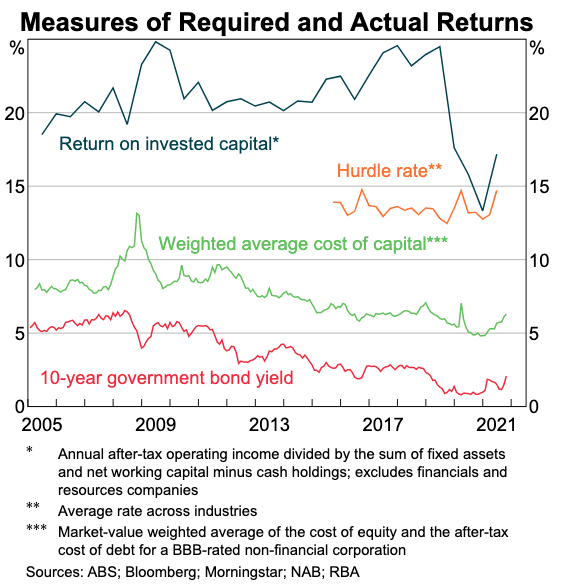 Large Australian companies can borrow for less than 2 per cent – and that’s tax-deductible. After inflation, it’s free money in real terms.

“Firms might keep their hurdle rates high because they are uncertain what the right hurdle rate should be, or because individual managers don’t want to be associated with a failed project.

“Or perhaps it’s because firms only have so much management capacity. So they don’t want to commit to a marginal project in case a better one should come along.”

In other words, management isn’t much chop.

Another possibility was that firms simply perceive higher risk, are increasingly risk-averse.

What Dr Ellis didn’t say is that Australian businesses aren’t collectively boosting investment because they don’t have to – the business share of the national pie has been rising nicely and a simple cost-cutting mentality has been delivering executive bonuses and higher dividends without taking more risk.

There could have been a happy alternative after the GFC.

“Rather than the supposed ‘creative destruction’ of a downturn, what is needed is the creative ignition spurred by a strong economy.”

Alas, many economies turned too swiftly to “fiscal consolidation” after the financial crisis – getting “back in black”.

There is the possibility we could behave differently after this crisis.

“This time, demand is bouncing back strongly, supported by policy. Shifts in demand between goods and services have opened up some industry-specific business opportunities, including for new firms.

“Meanwhile financial sectors globally are in good shape. Business sectors are also in much better financial shape than they were after the GFC. Profits have recovered quickly, and fiscal support has meant that some firms are considerably more cashed up than before.

“So the opportunities are there, if not in every industry, and businesses are well placed to fund or finance that investment.”

The Virtuous Cycle of the Hothouse Flowering 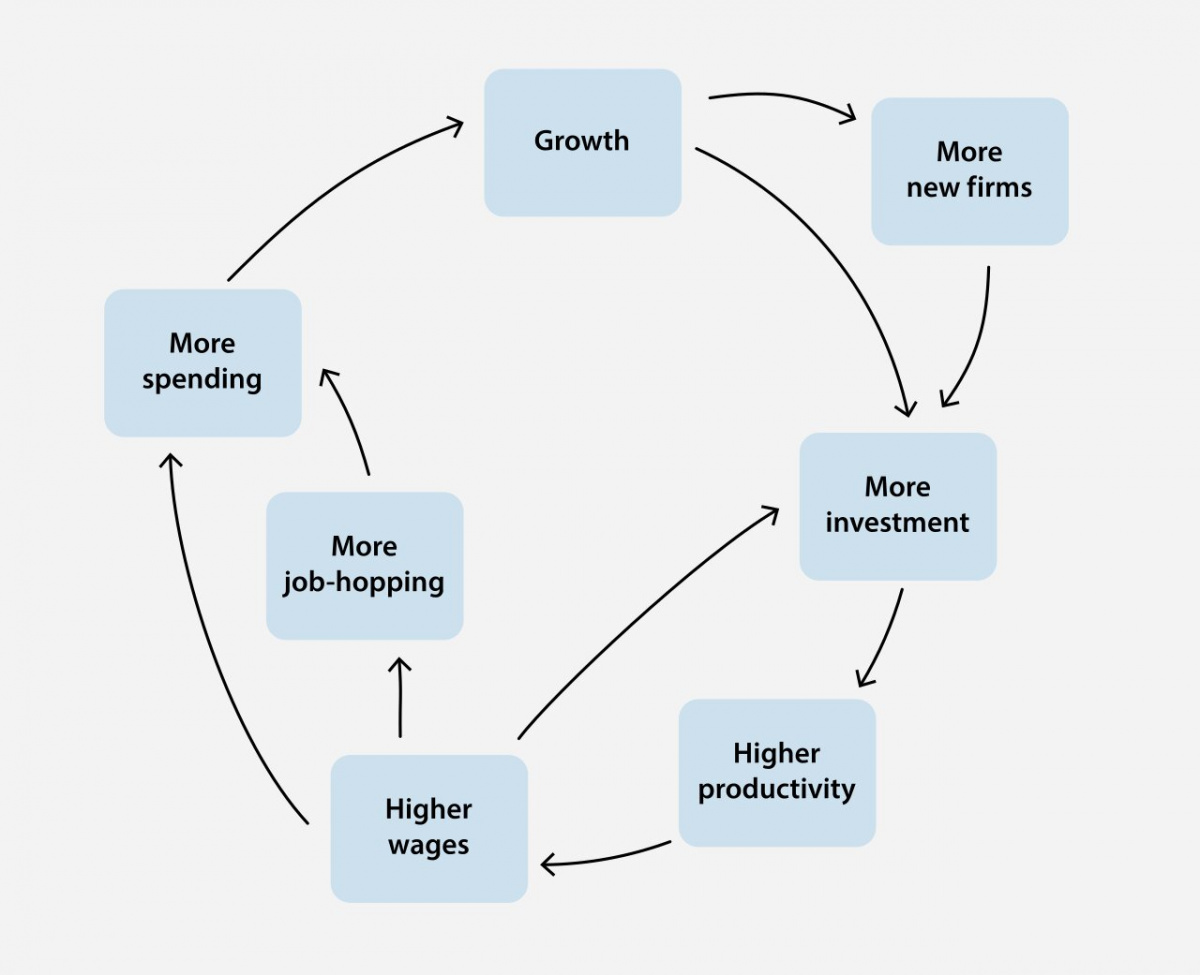 The 1920s also had the investment impetus of rebuilding after war.

The 2020s have a pandemic recovery and the potential investment bonanza of rebuilding the world’s energy industry.

Opportunity is knocking – if we’re up for it, if management and governments have the ticker. Money isn’t the problem.

Maybe FDR’s line again applies: We have nothing to fear but fear itself.