The Regency Park brewer recorded total beer sales of 82.3 million litres in the 12 months to June 30 and a pre-tax profit of $36.5 million, compared with $34.3 million the previous year.

The move to cans for its core range including Pale Ale and Sparkling Ale from 2018 continues to pay dividends for Coopers, with cans now accounting for more than 30 per cent of packaged sales.

The record sales of packaged beer were led by the Coopers stable of ales, which make up about 77 per cent of its total beer sales.

Coopers Pale Ale is clearly its best-seller, accounting for about 40 per cent of total production while its Stout, XPA and Mild Ale all enjoyed strong growth.

Coopers Managing Director Dr Tim Cooper said the release of its Stout into cans this year helped boost its sales by 11 per cent.

“The XPA continues to grow, which is fantastic and Mild Ale is benefitting from the interest in mid-strength beers – we had a 50 per cent increase in Mild Ale cans,” Dr Cooper said.

“When you introduce cans they do cannibalise the bottled beer sales a bit but in total they have created growth so that has been a success story for us and if we didn’t have the cans then our sales probably wouldn’t have remained as buoyant throughout COVID.”

About 75 per cent of Coopers beer is sold outside of South Australia.

State-by-state sales volume results reflected lockdowns as well as the tendency for drinkers to gravitate towards familiar brands in uncertain times.

Sales volumes in SA were up by 6.6 per cent for the year followed by the Northern Territory (6 per cent), Queensland (3 per cent), Western Australia (2.6 per cent) and Victoria (1.8 per cent).

New South Wales, which has been the most heavily impacted state for lockdowns this year was the only jurisdiction to lose ground, dropping 0.2 per cent.

“We are seeing quite varying results on a month-to-month basis. Partly it’s because different states are having different impacts (from COVID-19) and clearly it’s been quite bad in NSW and Victoria since June,” Dr Cooper said.

Reduced demand from overseas brewers and shipping constraints led to a 4.4 per cent reduction in malted barley sales from 57,900 tonnes in 2019-20 to 55,400 tonnes.

While the intermittent closure of pubs and clubs around Australia played a significant role in this, it also reflects a longer trend, with keg sales falling to 8.6 million litres in 2020-21 compared with 13.4 million litres 10 years ago.

However, rather than giving up on the traditional tap beer format, Coopers has invested more than $2 million to upgrade its keg line and refurbish 55,000 kegs.

It has also submitted plans to Port Adelaide Enfield Council for a 5500sq m expansion to warehousing facilities at Regency Park.

The $15 million investment, which boosts beer storage capacity at the brewery by almost 50 per cent, will allow Coopers to store all of its product on site.

Dr Cooper said the Brewers Association of Australia, comprising Coopers, Lion and CUB, would push the Federal Government for excise tax relief on kegs to boost their appeal and help the hospitality industry get back on its feet after 18 months of disruption. 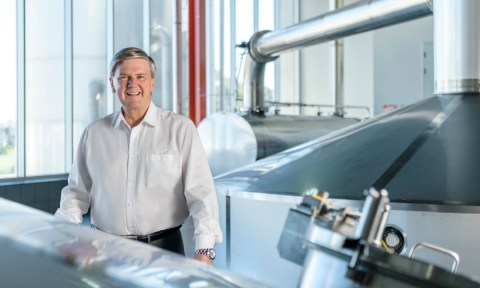 “Every six months the excise goes up so the government continues to get more money from beer. By reducing the excise on keg beer then it might help the hospitality industry and get more people drinking beer at the pub,” he said.

“Relatively recently bulk (keg) beer was about 22 per cent of the market but now it’s under 17 per cent of all beer sold so that’s quite a decline and most of that’s due to COVID – back in the ’70s it used to be about 50 per cent.”

When lockdowns first took hold in March 2020, Coopers took back 13,000 full kegs from pubs and clubs around Australia, most of which was tipped out.

Dr Cooper said lengthy lockdowns in Victoria and NSW from June this year resulted in a further 1500 kegs being recalled.

“Most of it was fairly fresh so we were able to reissue a lot of them so it was certainly a more controlled situation,” he said.

Dr Cooper said while it had been a challenging 18 months, Coopers was faring much better than 30 years ago during “the recession we had to have”.

“When I joined the brewery in 1990 we were 18 million litres and by 1993 as a result of the recession we dropped down to 11 million litres so that was quite a difficult time and the company nearly went bankrupt,” he said.

“So by comparison, even though we have been experiencing some turbulence with sales going up and down in unpredictable ways with the pandemic, we are in a much safer situation than were in the early 1990s.

“Back then all our profit came from the homebrew business whereas nowadays more than 90 per cent comes from beer.

“We will continue to focus on innovation through packaging opportunities and we’ll keep on doing seasonal beers as well to continue to create a bit of interest to make sure we can continue to perform as well as we can in a rather choppy market.”

Coopers will back up that good health by paying its more than 170 shareholders fully franked dividends of $13.50 per share.