The Adelaide-based company last week announced $4 million revenue for the first quarter of the 2021-22 financial year, driven by strong growth in the United Kingdom.

Its Adventurer smartphone watch, aimed at children aged five to 12, is designed to help parents stay in touch with their kids without the complexities and potential pitfalls of mobile phones.

The company launched its first smartwatch in 2017 and has since secured distribution deals with major retailers in Australia, New Zealand and the UK.

It also has a companion app for its watch, for which it charges a monthly subscription fee. This allows it to keep revenues ticking beyond the point of sale.

The coming quarter, which includes major sales periods such as Black Friday, Cyber Monday, Christmas and Boxing Day, is expected to be a record revenue period for Spacetalk as it launches into the United States and Canada.

The inaugural European partnership is with Elisa, Finland’s largest telecommunications and digital services company, and is expected to lead to more retailers coming on board on the continent in the coming months.

He said the product also gave mobile providers access to a market – five to 12-year-old children – that they were currently not servicing.

“All mobile operators are looking to get into this category of young kids but the right device and brand hasn’t previously been available,” Fortunatow told InDaily.

“The device is fully designed by us and is all of our own intellectual property from the industrial design to the firmware, apps and the service.

“It’s a unique offering so Elisa engaged with us and we’ll be launching with them in all of their shops and online in November.

“Not only are they acquiring brand new customers and growing their businesses that are otherwise stagnant, they are actually acquiring these customers potentially for life because whatever mobile operator somebody starts off with they generally stick with for a very long time, especially if it’s a good experience.”

The Rose Park-based company has doubled its staff numbers in the past 12 months to 61, with the majority based in Adelaide.

It also has employees in the UK, Melbourne, Sydney China and four in the US ahead of its expansion. 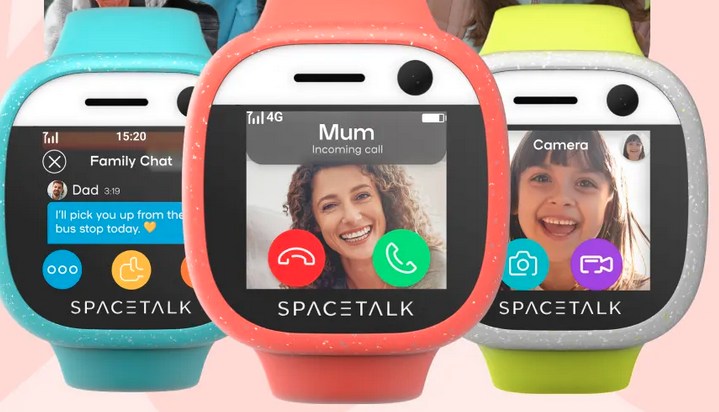 “We’ve hired all our operational staff there, we’ve got a call centre, a customer service centre and all of the fulfilment is in place,” Fortunatow said.

“We also have all of the agreements in place for distribution and we’ll be announcing all of those details before Christmas and we’re extremely excited.

“The company is growing at about 45 per cent and has been for a few years now but the market opportunity is enormous – in the US there are about 30 to 40 million kids between the ages of five and 12.”

Spacetalk works with partners in Asia to manufacture its watches and says it has the capacity to produce about 1500 a day, which gives it plenty of capacity to scale up.

But Fortunatow said a strategy of fast growth capturing market share was more important than short-term profits at this stage.

“Our company’s goal is to be the number one brand when the market matures and we believe the definition of the market maturing will be when 30 to 40 per cent of all kids between the ages of five and 12 have a device like ours,” he said.

“It’s probably five or six years away and we have grown at an enormous rate but we’ve still got a lot left to go.

“We can be profitable if we slow down our growth but if we do that we will lose and we will not be the number one brand.”

The publicly-listed company has a share price of $0.20 and a market capitalisation of $34 million.

Known as MGM Wireless until last year, Spacetalk was founded in Adelaide in 2001 and began developing applications for SMS communication in schools in 2002.

It went on to create the world’s first SMS based Automated Student Absence Notification Solution and is now recognised as a global leader and pioneer in socially responsible and technology-enabled school communication.

“It was really all about listening to our customers because when parents get a text message that their child hasn’t arrived at school as expected there’s quite an emotional response and the very next question they ask is ‘where are they’?” Fortunatow said.

“Eventually we realised what we really need is an all-in-one smartphone, watch and GPS device.

“Back then we were a software company with zero experience in any form of hardware but we just started working on it.”

The company has also launched a smartwatch for seniors in Australia called Spacetalk LIFE.

It is working on a new model of the seniors’ smartphone watch, which it aims to launch globally next year.

“In the meantime, we’re getting a huge amount of interest from aged care service providers in Australia, OTs, doctors and pharmacies,” Fortunatow said.

“Selling watches like this globally isn’t straightforward because every country has its own antenna frequencies and different systems so when we sell globally we need to have a device that will work with all these different operators in different countries, which Adventurer our kids watch does.”