Lithium from the project near Darwin will likely end up in Tesla cars following a major offtake contract with the electric car maker’s supplier.

The listed company announced its final investment decision to the Australia Securities Exchange this morning and expects to begin works in October and start producing its first lithium concentrate before the end of next year.

The project is about 25km from the port of Darwin, is the first lithium mine in the Northern Territory and the first new significant mine in more than a decade.

It was last year granted Federal Government major project status and has all necessary NT government approvals. The project is also fully funded following the raising of $116 million from institutional investors and shareholders in recent weeks.

Adelaide-based earthmoving and construction company Lucas Total Contract Solutions has been awarded the mining services contract while the contract to build the one-million-tonne per year processing plant has gone to Perth’s Primero Group.

Approximately 80 per cent of Finniss’ initial output is covered under 4-year offtake agreements with Ganfeng, one of the world’s largest lithium producers by production capacity, and Yahua, a key lithium supplier to Tesla.

Core Lithium managing director Stephen Biggins said the decision to go ahead with the project was the culmination of five years of hard work.

“FID places Core firmly at the front of the line of new global lithium production just at the right time as lithium demand and prices are increasing rapidly,” he said.

“The Project and FID are underpinned by high-grade lithium deposits that have the potential to support long term lithium supply from northern Australia, quality lithium offtake partners and a highly engaged and supportive NT Government, Finniss will become Australia’s next lithium producer.”

The Finniss project is expected to create 250 jobs during construction and operations. 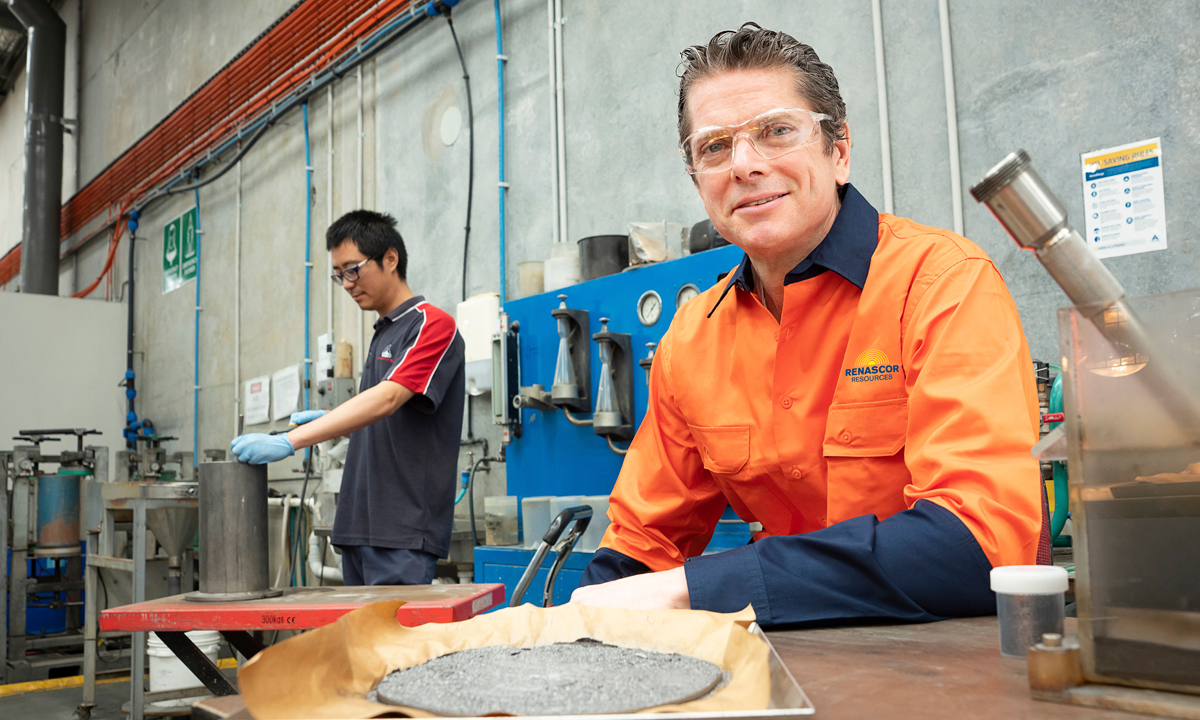 Renascor managing director David Christensen in the lab with a graphite sample.

Meanwhile, South Australia is well placed to cash in on a $2 billion federal fund announced this week to help finance critical minerals projects.

Critical minerals include resources that are used in technologies such as mobile phones, computer monitors, lithium-ion batteries, electric cars and solar panels, such as graphite, lithium, magnesium and nickel.

The state hosts 80 per cent of Australia’s battery-grade graphite resources, large quantities of lithium and cobalt, and has high prospects for manganese and nickel.

It also has vast copper resources, which is also globally recognised as a key future mineral necessary for the production of advanced technologies.

With demand for critical minerals expected to increase significantly in the coming years, the loan facility will be used for new projects to get off the ground in the minerals sector.

The announcement on Tuesday has been welcomed by emerging SA miners and the South Australian Chamber of Mines & Energy.

The facility will be managed by Export Finance Australia and will run for 10 years, or until the entire $2 billion has been used.

She said critical minerals were fundamental to developing new energy sources and would be a driving force behind the resource sector’s role in decarbonising the Australian economy.

“It is encouraging to see the Federal Government supporting their Critical Mineral Strategy with funding measures that directly assist industry while also progressing other complementary economic and strategic outcomes,” Knol said.

Adelaide-based company Renascor is looking to develop its $210 million Siviour graphite project on Eyre Peninsula and expects to make a final investment decision next year.

The proposed mine near Arno Bay is the only graphite deposit identified on the Australian Government’s ‘critical minerals road map’, which this month also granted Siviour major project status.

He said the Siviour Battery Anode Materials Project “falls squarely within the type of Australian project that has the potential to become fundamental to the future energy economy and offer growth opportunities for Australia in new energy”.

“We look forward to continuing to work with the Australian Government and Export Finance Australia as we progress Siviour through the final development phases and an into project financing,” Christensen said.

Resources Minister Keith Pitt said the new loan facility would allow for the country to be a larger player in the sector.

“Australia is already among the world’s top suppliers of some of the world’s most sought-after critical minerals and we know there is enormous potential through our untapped reserves,” he said.