The share price of publicly-listed Papyrus Australia has more than doubled in the past fortnight since announcing the successful proof-of-concept trial at its factory in Egypt.

“This is a world-first and opens the door to using the millions of tonnes of waste banana plantations create every year to produce clean, sustainable, environmentally friendly, degradable packaging products to displace the plague of plastic packaging harming our planet,” Papyrus Australia’s Managing Director Ramy Abraham Azer said.

“Whilst we have made moulded products before in Australia, China, and Egypt, all were from fibre prepared under laboratory conditions and with very limited moulding runs.

“We are now able to produce ‘tailored’ fibre on a daily basis at our factory in Sohag (Egypt) that is subsequently moulded at a stock standard moulding factory for a whole shift.”

Papyrus Australia was founded in Adelaide in the mid-1990s after Azer moved to Australia with his Adelaide-born wife Phoebe to complete a Masters in Mechanical Engineering at the University of Adelaide.

He soon developed a technique for producing veneer from fibre sourced from banana tree trunks.

Unlike other fruit trees such as apples and oranges, a banana palm takes 6-8 months to grow to maturity, producing one large bunch. The tree is then cut down and left to rot and a new shoot is grown in its place. 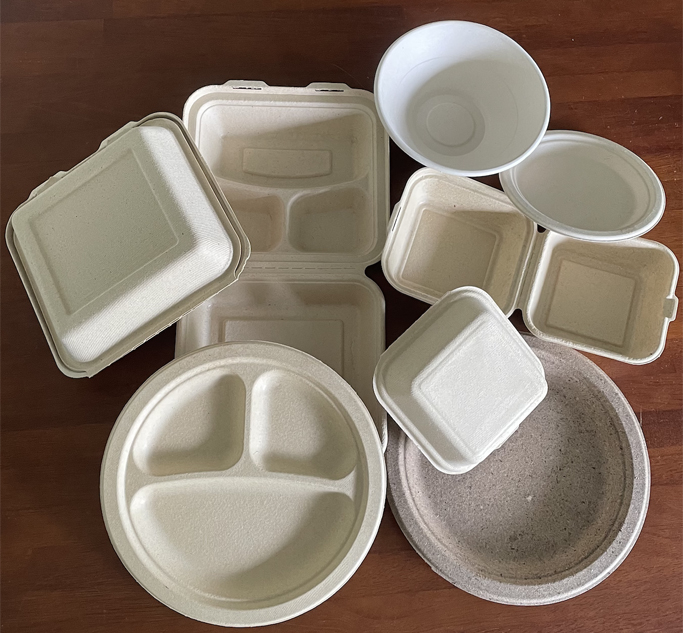 Food containers made from the banana waste.

The company listed on the Australian Securities Exchange in 2005 and spent the next five years building two prototype machines.

The company initially set up a machine on a banana plantation but found that huge transport costs due to the large distance to port and an unreliable backpacker workforce made the project unviable.

It also uses a process that is zero-waste and chemical-free and creates a product that is water and fire resistant and biodegradable.

The company sees itself as a technology company rather than a banana waste processor, and now plans to license its technology to suitable entities to establish banana fibre factories in locations where bananas are grown.

“Papyrus’ proprietary technology is now capable of sustainably producing moulded packaging products on mass to meet the demands of the largest customers and have a real impact on the environmental issues we all face,” Azer said.

“Not just by displacing plastics, but also by reducing greenhouse gas emissions by locking the banana plantations’ waste into superior, cost-competitive products instead of decomposing anaerobically releasing methane gas into the atmosphere.”

Papyrus Australia has a market capitalisation of about $22 million. Its shares opened at $0.05 this morning, up from $0.02 a month ago.

Ticket sales are open for the South Australian Business Awards, held at the Adelaide Convention Centre on Friday 22 October. Premier Steven Marshall is the keynote speaker at this must-attend event for anyone serious about doing business in South Australia.