The South Australian resources sector contributed $5.7 billion – more than 40 per cent of the state’s total – in exports for the 12 months to July 2021, according to the latest ABS data.

The state’s total exports reached a record $13 billion for the year, up 19 per cent on the previous year, the highest financial year increase since 2012.

She said SACOME’s Economic Contribution Study highlighted that in 2019-20, 12 SACOME member companies contributed $5.9 billion to the South Australian economy – the equivalent of 5.3 per cent of SA’s Gross State Product.

“With the 2022 State Election looming, policies that facilitate the growth of the South Australian resources sector are SACOME’s key concern,” Knol said.

“Given the scale of the sector’s contribution, bipartisan support for policies that continue to grow the resources sector must be a priority for politicians and policymakers alike.”

The company’s total payments to the South Australian Government, including royalties, taxes and other payments, were $136 million, up from $110 million in 2019-20.

Copper was also a strong performer with its South Australian Olympic Dam mine, the largest in the state, returning a solid profit and its highest annual copper production since BHP acquired the asset in 2005. It also reported its highest gold production ever for the operation.

Friday’s announcement of an impending merger between South Australian company Santos and Oil Search helped the Australian Securities Exchange end the week on a high.

The $21 billion oil and gas merger helped both company’s stocks and the Australian market recover some losses from Thursday’s 1.9 per cent drubbing.

“The oil and gas industry over the next decade is going to continue to consolidate,” he said.

“Fossil fuels are going the way of the dodo.”

World efforts to reduce carbon emissions and adopt renewable energy are likely to lower the demand for oil and gas.

Traders on the ASX saw compelling benefits of the merger. Oil Search investors will receive 0.6275 Santos shares for each Oil Search one.

Materials shares were the main force in ensuring a good end to the week for the market. Iron ore trader Fortescue climbed 2.58 per cent to $18.27.

However, investors had their first weekly loss in the past three. The ASX 200 declined by 1.55 per cent.

The scale of the damage to the Australian economy from lockdowns will be evident in Thursday’s jobs data.

The ACT, NSW and Victoria have endured lengthy stay-at-home orders and a jobs decline is expected.

After all-time highs in August, the indices have in September fallen to the levels of late July. 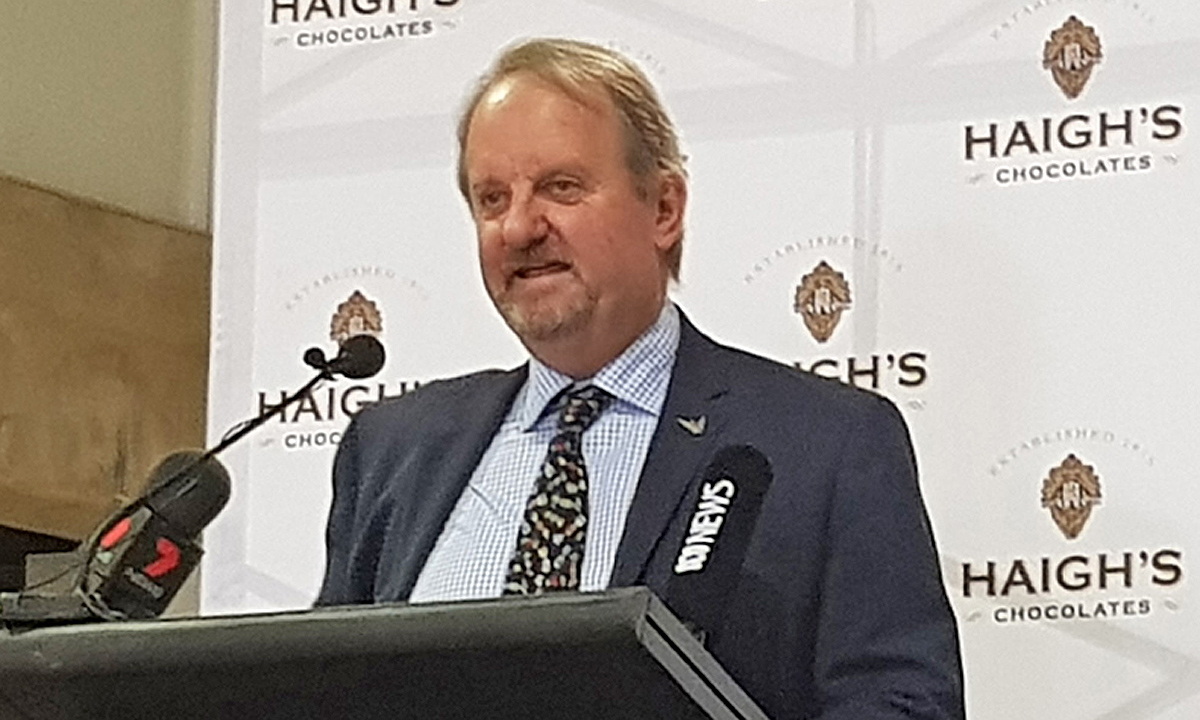 Alister Haigh has announced the chocolate company will open a Marion store before Christmas.

Iconic SA company Haigh’s Chocolates has announced it will open a new store at Westfield Marion just in time for the festive season.

The new store, which will be located on level one opposite Mecca Maxima, will be the 106-year-old chocolatier’s eighth in South Australia, and its twenty-second in Australia.

The first Haigh’s store in the Beehive Building on the corner of Rundle Mall and King William St was opened in 1915 and remains the company’s flagship shopfront today.

Chief Executive Alister Haigh says the newest location will offer a premium shopping experience to those in Adelaide’s south.

“Westfield Marion is the largest shopping centre in Adelaide and with its enticing blend of retail offerings it’s the perfect fit for our next store,” he said.

The Edinburgh Park-based manufacturer is ramping up production of its 3D printing and robotic welding units to fuel increasing global demand and was recently granted an Australian patent for its market-leading Wire Additive Manufacturing (WAM) process.

The welding trial is entering its final six months and involves the use of scandium as a strengthening element for existing aluminium welding wire to create high-strength, commercially viable aluminium-scandium compounds, which remove the need for age-hardening heat treatment.

If the trial progresses to commercial use, AML3D says it will enable a range of new applications in a range of industries including automotive, mining and shipbuilding.

AML3D managing director Andy Sales said the collaboration with Deakin University’s Institute for Frontier Materials was the first in a number of significant moves the company was making with its technology partners.

“With our patented WAM technology well-proven and approved for commercial use in many industries worldwide, we have been moving forward with building a pipeline of cutting-edge materials R&D that will allow us to easily manufacture components from exotic alloys offering huge benefits in strength and weight while offering all the cost and efficiency savings of additive manufacture,” he said

The wellness centre has been in operation since late July but was officially launched this month. It is situated next to Altaira’s head office on Lower North East Road and includes a dedicated aged care specific training room.

Equipped with the latest aged care equipment, it allows for those using the facility to shift the focus from theory to practical experience and continued growth of knowledge in the industry.

The company’s new allied health and wellness division provides physiotherapy, occupational therapy, return to work rehabilitation, pre-employment functionals and other vital services to the aged care and community sector and the wider community.

“We identified that our clients were requiring an increased number of allied health professionals for short and long-term placements,” Giro said.

Altaira is looking to recruit physiotherapists and occupational therapists to grow their Allied Health team.

New graduates and experienced clinicians are encouraged to apply for ongoing casual/temporary roles, as well as contract and permanent placements.

Three payments providers will be allowed to merge despite concerns charges for electronic transactions could later rise.

BPAY Group, Eftpos Payments and NPP Australia will join forces after the Australian Competition and Consumer Commission allowed the bid on Thursday.

Opponents of the merger are concerned about what may happen to the Eftpos service.

In many cases, Eftpos provides a cheaper alternative to using the Mastercard and Visa networks.

The ACCC has accepted the pledge, which can be enforced by a court.

The Reserve Bank will also ensure those making payments can choose which network they use.

ACCC chair Rod Sims said rapid change was happening in payments and the ACCC was satisfied the merger would not have an adverse impact on Eftpos services.

Robert Milliner, the chair of a payments group representing the providers, said the merged group would better compete with international card operators and technology giants.

Apple and Google’s popular digital wallet services on phones have given them increasing clout over the future of payments.

The big four banks are the major shareholders of the three payments providers.

Sims said they would be more likely to invest in domestic payment services if the companies merged. This would bring benefits to Australians, he said.

The three providers will maintain their identities and call their combined efforts Australian Payments Plus.