But strong lentil and canola prices and solid returns for wheat are likely to help even the ledger following last year’s bumper crop.

According to the latest Australian Bureau of Agricultural and Resource Economics (ABARES) winter crop production forecast, the Australian crop is on track to hit 54.8 million tonnes, which is 32 per cent above the 10-year average.

Released yesterday, the ABARES reports forecasts yields of more than 20 per cent above 10-year averages in NSW, WA and Queensland and about 10 per cent higher in Victoria and SA.

The total crop increase is partly due to record plantings this year of about 23.2 million hectares. Average yields are forecast to be above long-term averages in every state, but below what was achieved last year.

Last year’s harvest was the second most lucrative crop on record in South Australia, reaching $2.5 billion in farm gate value from 9.14 million tonnes.

The four million hectares planted last year in SA was the seventh-largest on record for area and was second only in value to the bumper $2.7 billion crop of 2010-11.

Grain Producers SA chair Adrian McCabe said heavy rains across most of the state in June and July had rescued what was shaping up to be a poor season after an “extraordinarily dry” autumn.

He said most areas of the state were in a similar position, potentially with the exception of the South East and southern Eyre Peninsula, which were looking good, and some areas in the mallee south of Loxton that were “probably doing it a bit tough”.

“We’ve had two months of rainfall basically in June and July – August was below average and September is tracking well below average so we’re headed for a South Australian season that is going to be average at best,” he told InDaily.

“Canola is probably three weeks later than we’d like for top-end yield and wheat is about two weeks later, grain legumes are well situated though.” 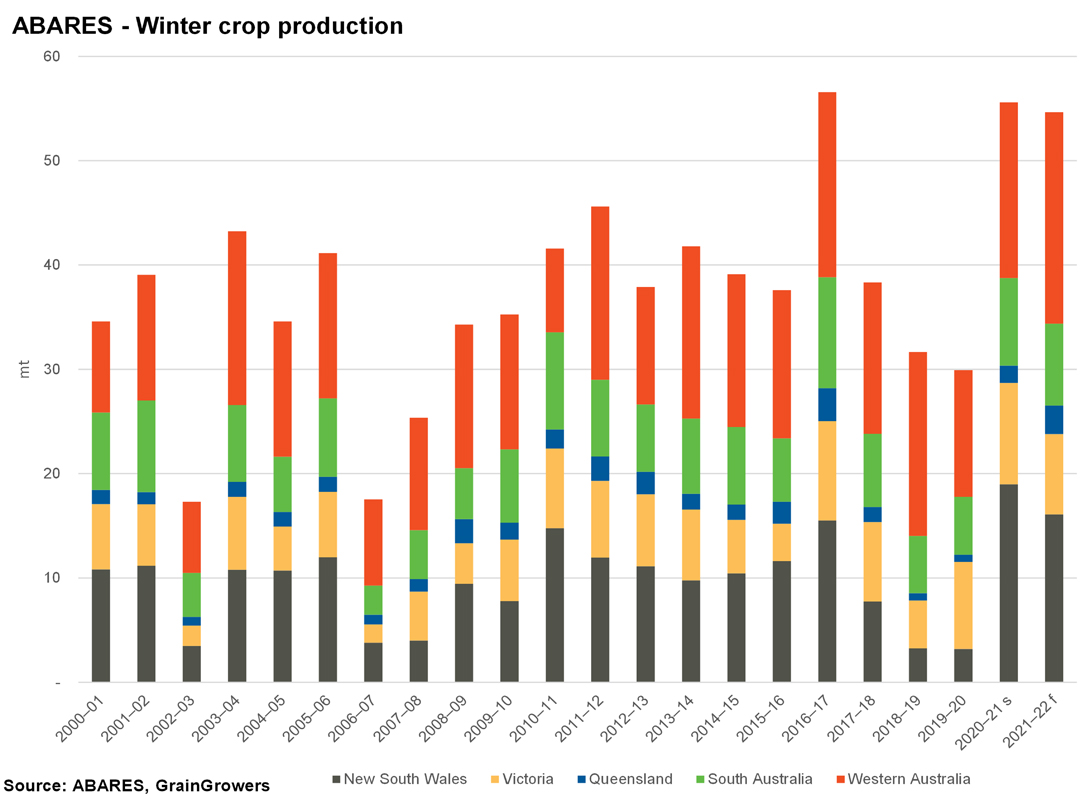 The Indian Government slashed tariffs on Australian lentils from 33 per cent to 11 per cent in July and also reduced customs duty from 10 per cent to zero.

A heatwave in Canada, one of Australia’s biggest competitors in the lentil market, has also increased the demand for the Aussie grain legume.

McCabe said drought across many key growing regions in the northern hemisphere had also boosted demand for Australian canola and wheat.

“Canola and lentil prices are at about decile nine or 10 levels, wheat is at a decile 8 level.”

China imposed a combined 80.5 per cent tariff on Australian barley in May 2020, comprised of a 73.6 per cent anti-dumping duty and a 6.9 per cent countervailing duty.

McCabe said barley had copped a $20-$30 per tonne hit on the back of the Chinese tariffs but was showing resilience due to high livestock prices and increased shipping costs caused by supply constraints as a result of the coronavirus pandemic.

“The end destination for a lot of these crops for us is Indonesia and Saudi Arabia and because we are only about five days on the water to them it helps this a little bit,” he said.

“Our competitors are Russia and Kazakhstan and places like that and they have got 30 days on the water to these markets, with high shipping prices.”

The first genetically modified canola crops are in the ground this year in South Australia following the lifting of a 16-year moratorium.

McCabe said there had been about a 20 per cent uptake of the GM canola in South Australia as many farmers waited to see how it would perform.

“There are no issues so it’s been a smooth transition into it as expected,” he said.

“I reckon next year you won’t be able to buy seed for it. People have seen the GM around the place, are quite happy with the look of it and have seen the results.”

Nationally, canola production is tipped to jump by 11 per cent to a record high of more than five million tonnes as the area planted increases by 24per cent to just over 3 million hectares.

“We need to ensure the skilled professionals who are an essential part of harvest are able to get to where they need to be,” he said.

“Harvest won’t wait for the correct measures to be put in place.”