The Memorandum of Understanding between Renascor and South Korean conglomerate POSCO is a critical step as the project edges closer to a $210 million Final Investment Decision next year.

Renascor is looking to develop its Siviour mine near Arno Bay on Eyre Peninsula, which is the second-largest reported proven reserve of the resource in the world and the largest reserve outside of Africa.

The company also plans to build two processing facilities in South Australia – one at the mine site to create a 95 per cent graphite product while a second, more technical site would create a purified spherical graphite product to a purity of at least 99.95 per cent.

It would be built between Arno Bay and Port Adelaide with sites being considered including Port Pirie, Port Bonython and Port Augusta.

Stage one of the project would generate a production capacity of about 30,000 tonnes per annum.

The August 25 announcement of the POSCO deal takes Renascor’s offtake MOUs to up to 60,000tpa, following smaller non-binding agreements with two Chinese battery anode companies and a Japanese trading company in the past 12 months.

The latest MOU has prompted Renascor to undertake feasibility work on a stage one capacity increase and a stage two expansion.

Renascor managing director David Christensen said all of the world’s highly refined graphite was currently processed in China, some of which was originally sourced from East Africa.

He said the ability to mine the graphite, process it and purify it to at least 99.95 per cent purity before exporting to buyers in China, Japan and Korea gave the Siviour project a competitive advantage.

“China has 100 per cent of the refined graphite product right now and if you look outside of China at other projects that can compete on a global scale, we really think we have the opportunity to become the lowest-cost producer of a very high-quality product.

“We have a great deposit here in South Australia and it competes in scale and cost against largely what is in East Africa but the advantage we have here is we can do the downstream processing here.

“We process it here and then we ship it off to customers all of whom are in north-east Asia so it’s relatively unique from an Australian point of view to have a competitive advantage with a value-added product.”

POSCO is among the world’s leading steelmaking companies and also one of the largest suppliers of lithium-ion battery material. It is listed on the New York and Korean stock exchanges and has a market capitalisation of more than $30 billion.

POSCO is already among Australia’s largest private export customers, largely as a result of iron ore and coal sales.

The company announced a major expansion into the secondary battery material business in 2018 and is already a major player after agreeing to supply anodes for electric car batteries being manufactured in a joint venture between General Motors and fellow Korean company LG.

“We have a non-binding offtake and we have to convert that into a binding offtake and that’s done through a combination of negotiating price and quantity terms and then qualifying our product by providing larger-scale samples,” Christensen said.

“If we are able to finish our work and convert this into a favourable binding contract then it will set us on a path where we’re going to be able to do the thing that has hitherto been impossible for graphite developments and that is to establish a path towards financing and this may put us on that path in the most concrete way possible.” 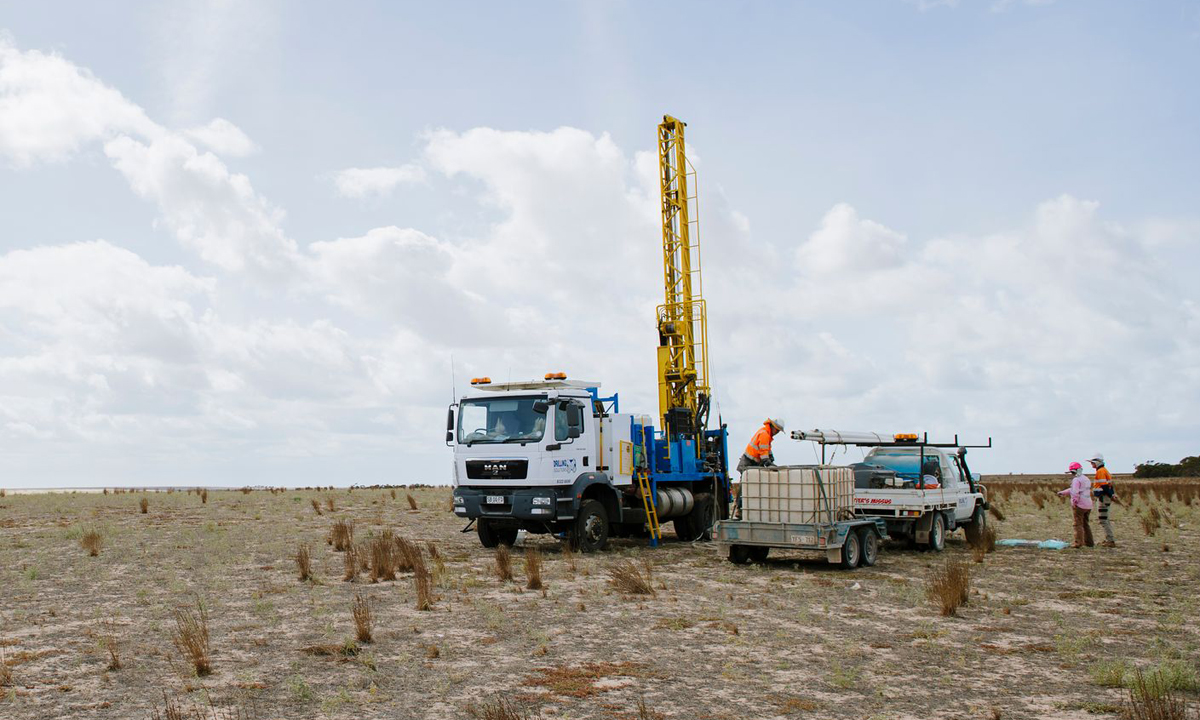 Renascor completed a $15 million capital raise in May with the money expected to fund the company through to a final investment decision (FID) next year.

In the past six weeks, Renascor’s share price has almost doubled from $0.068 on July 26 to $0.13 on Friday, taking its market capitalisation to about $244 million.

Renascor last month also completed a large-scale pilot flotation trial with one of its offtake partners in China, achieving overall average graphite purity of 95.7 per cent for the first processing stage.

“What that involves from a metallurgical point of view is relatively simple,” Christensen said.

“You crush and grind the rock and then you float it and graphite is not very dense so it floats to the top much like the cream on your latte in the morning and you can get it to about 95 per cent then you dry it and bag it up and that’s what would occur at the mine site,”

The second stage involves a two-step process where the graphite is milled into very small spheres.

“You want to put it into spheres because you are packing it into batteries quite tightly. Then it is purified into a very high purity through a refining process so you want to be in a place that can handle an industrial process,” Christensen said.

“Then an anode company would coat it and create active anode material and then provide it to a battery cell manufacturer who puts the anode in with the cathode to produce battery cells.”

“We’re talking to local communities, the State Government and trying to make our own commercial decisions about where the most opportune place to put the secondary refining process.”

The capital cost of the project is about $210 million, which Christensen said would be raised through a combination of debt and equity.

He said POSCO had indicated it would put forward an equity proposal that would likely involve it taking a minority stake in the project if its offtake agreement became binding.

“We’ve also been in discussion with groups such as the Clean Energy Finance Corporation and Export Finance Australia who have given us in-principle support and what that means is once we complete all of our technical and regulatory work and we have our offtake agreement they will have the option to participate in any sort of debt raising we might be doing as we try to reach that construction capital need of $210 million.

“We have other offtake partners who could collectively take an additional 30,000 tonnes so there is a possibility we could expand the operation and if we do then that may impact the timing but that would also give the potential for a more robust project so we’re looking at all that now.”

Renascor has also developed a technique that uses the readily available and less toxic sulphuric acid in the refining process as an alternative to the hydrochloric acid traditionally used at Chinese plants, which is expensive, difficult to handle and potentially harmful to the environment.

He said issues involving a project’s environmental footprint had taken on greater significance within the lithium-ion battery materials industry.

If it goes ahead, the project is expected to create about 100 construction jobs and 200 further positions once production begins.

Christensen said construction would take about 15-18 months from the FID, which is due next year, meaning production could potentially begin in the second half of 2023.

“We’re going to continue with technical work to get the project ready for a final investment decision and that will involve detailed engineering work and where we are going to site the downstream plant,” he said.

“I think we have a great opportunity to give South Australia something that is pretty special in terms of not only a mining operation but a downstream operation with a higher value-added product in a growing industry and this project has the potential to be one of the largest if not the largest producers of the product in the world.

“It should be a really good example of how you can leverage a good asset in Australia to gain even further value and create newer jobs outside of just mining jobs.”