Centrex Metals has begun small scale production at its Ardmore high-grade phosphate rock deposit 130km south of Mount Isa and plans to ramp up production to 800,000 tonnes a year potentially by the end of 2024.

The phosphorous rock is crushed, packaged into one-tonne bulker bags and trucked from Mount Isa to the east coast for direct use as a fertiliser by farmers or to be further processed by organic fertiliser producers.

The first trucks left this month and initial sales have been about 100 tonnes but Centrex CEO Robert Mencel said he was in discussions with potential customers about much larger orders.

He said the plan also utilised flatbed trucks that brought supplies to the outback mining town of Mount Isa but often returned to the east coast empty.

“At the moment it has gone to organic fertiliser producers and compost producers but we’ve had inquiries directly from farmers,” Mencel told InDaily.

Centrex listed on the Australian Securities Exchange in 2006 with the aim of developing several iron ore projects on South Australia’s Eyre Peninsula.

But in 2015 the company decided to step back from iron ore as a result of low global prices. It sold off its South Australian assets and dissolved its joint ventures, returning more than $30 million to shareholders in the process.

It then pivoted to become a fertiliser focused project developer and picked up the Oxley Potassium Project near Geraldton, Western Australia, in 2015 and acquired the Ardmore project from Incitec Pivot for $5 million in February 2017.

While the WA potassium project seeks a partner to advance it to the next stage, Centrex has recently pushed ahead with Ardmore after the phosphate price last year recovered to about US$125 a tonne from US$70 a tonne where it had hovered for almost two years.

Including the acquisition, Centrex has spent about $20 million developing the Ardmore project and a trial processing plant on site is nearing completion. 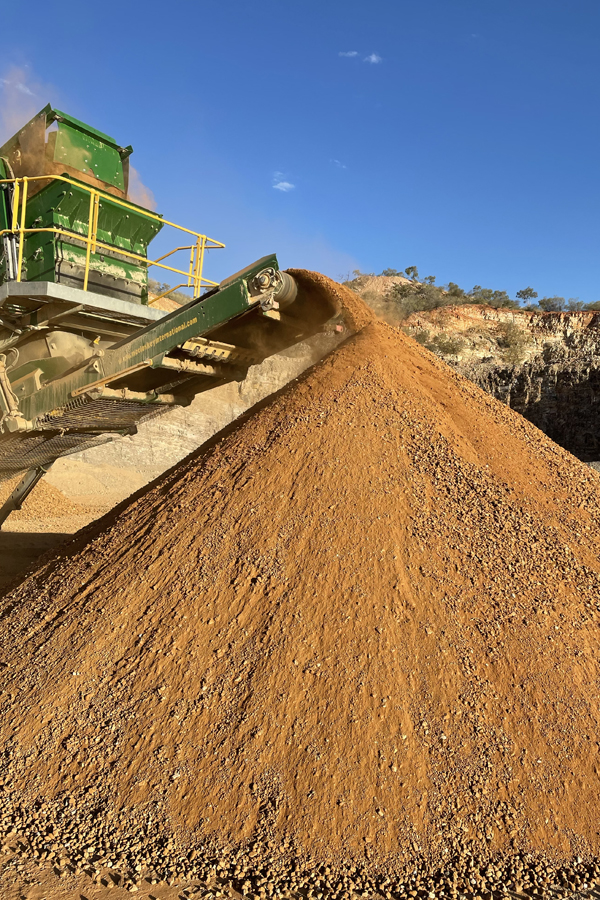 Rock phosphate after going through the crushed at Ardmore.

“It’s the highest-grade rock phosphate in Australia so if you’re going to do a project that’s a pretty good place to start,” Mencel said.

“Global agricultural commodity prices are high so what’s happening is farmers are making more money, they’ve got more money to spend on fertiliser so demand is increasing.

“A lot of phosphate in Australia is imported from Africa and their freight costs have gone up considerably but it has also meant that it was less competitive for China to export fertiliser because of the high freight prices.”

Centrex says the quality of its phosphate rock is such that it can be crushed down to particle sizes of less than 4mm and applied directly onto pastures as an organic slow-release fertiliser to keep feed growing for dairy farmers.

The slow-release aspect is also being hailed as an important factor to prevent the leaching that can occur in high rainfall areas with more processed soluble fertilisers like superphosphate, resulting in excess nutrients finding their way into waterways and impacting fragile marine environments such as the Great Barrier Reef.

Mencel said the company was exploring the direct-to-farmer niche while its production was low.

“Rock phosphate is less soluble and is effectively a slow-release fertiliser – beyond three years it is still having an effect and it has great environmental benefits because it doesn’t wash away,” he said.

“At the moment it’s a minor part of the business but longer term it’s really where the future is and it’s where we want to be.”

Australia and New Zealand import about a million tonnes of phosphate a year between them.

Centrex estimates a full-scale processing plant to take its production to 800,000 tonnes a year will cost about $78 million and take three years to ramp up to full production.

With its corporate headquarters still in Adelaide, there are about a dozen contractors working on the project but Centrex expects that to increase to a workforce of about 60 when production ramps up.

Mencel joined Centrex in May and has 25 years of experience as an engineering and mining executive developing and operating a wide range of mining, mineral processing and engineering operations.

His previous roles included CEO of the Republic of Nauru’s phosphate company RONPHOS where he was responsible for the production, marketing and export of phosphate.

“In the phosphate market, it’s all about pre-qualification. These big manufactured fertiliser producers have got billion-dollar plants so what’s important to them is to make sure the plant is operating at maximum capacity producing products on spec,” Mencel said.

“So to become an approved supplier you have to go through a pre-qualification process and we’ve already sent samples off.

“The next thing for us  is to send 5000-tonne samples, we’ll do that next year and if it goes well they will sign longer term contracts and we’ll ramp up production.”

Mencel said Inoculating phosphate rock with suitable micro-organisms can further improve its effectiveness and effectively add value to the product.

“Organic fertilizers are an exciting and rapidly growing part of the fertilizer industry,” he said.

“Based on good science, microbe inoculants have the potential to significantly improve the effectiveness of direct application fertilizers. As a provider of low carbon emission environmentally friendly, low cadmium phosphate rock, Centrex intends to play a significant role in Australia’s organic fertilizer industry.”