Buoyed by the first full year of operation since it made significant bus division acquisitions, SeaLink’s revenues broke through the billion-dollar mark for the first time to reach $1.173 billion in 2020-21.

Its marine and tourism businesses include the SeaLink Kangaroo Island ferry service and Captain Cook Cruises, which had been the mainstay of the business until it bought into buses last year. They contributed $215.1 million to the company’s 20-21 revenues.

SeaLink acquired Transit Systems Group in January 2020 for $635 million, including bus services in London and Singapore.

It also commenced a joint venture with John Holland Adelaide Trams in the first half of the 20-21 financial year to operate the new Adelaide Tram service and signed a new 10-year SA Government bus contract in Adelaide.

SeaLink also began several key new contracts during the year including operation of the Brisbane River CityCat, contracted services to Hayman Island and a Katherine school bus contract in the NT.

On July 1, it completed the acquisition of WA company Go West Tours for an enterprise value of $84.7 million, marking the company’s expansion into the resource transportation sector. 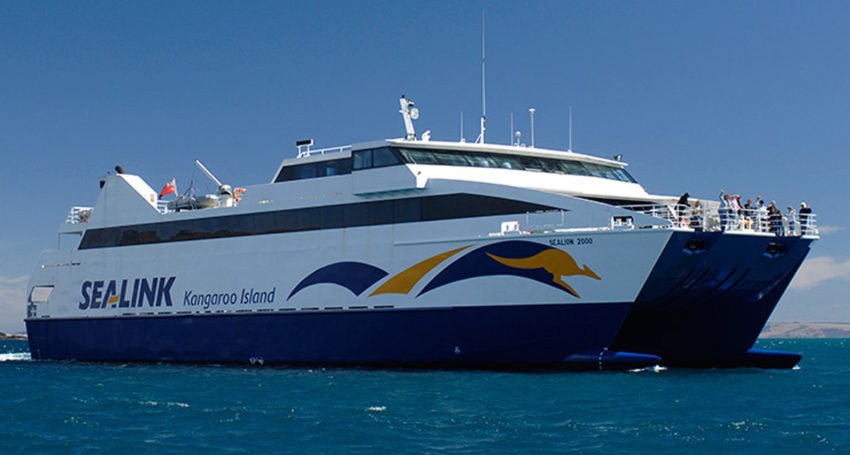 One of SeaLink’s Kangaroo Island ferries.

“By the end of FY22, SeaLink expects to be operating at least 55 zero-emission buses in its Australian fleet.”

However, the ending of JobKeeper in March this year and the continued lack of interstate tourists now means that some of SeaLink’s tourism boat services are no longer operating. Captain Cook Cruises services in NSW and WA have been the hardest hit.

While COVID-19 lockdowns and border restrictions continue to hamper the travel business, 88 per cent of SeaLink’s revenue was sourced through government and ‘blue-chip’ contracts.

“Although SeaLink is now a global business with operations in London and Singapore, which made management of the pandemic that bit more challenging, we are in a great position to have approximately 90 per cent of our revenue base fully contracted by government or large corporate entities,” Feuerherdt said.

“We have anticipated, navigated, and repositioned to finish with a strong balance sheet that supports our growth strategy and ultimate purpose: to become a world leader in delivering essential journeys through safe and intelligent transport solutions whilst creating brilliant customer experiences.

“We are looking forward to another successful year ahead, and I thank our entire team for their continued hard work and commitment during some of the most challenging times we have faced as a team, a community and an industry.”

The company will pay a fully franked final dividend of nine cents per share to take its full-year dividend to 16 cents.

The dividend is at the low end of its stated pay-out range of 50 to 70 per cent of net profit after tax and before amortisation.

Shareholders responded negatively to the news with SeaLink’s shares losing more than six per cent yesterday to close at $9.36.

However, its share price and market capitalisation of over $2 billion is more than double the $4.43 its shares were trading at on July 1, 2020, when the previous financial year began.

SeaLink was ranked No.12 in InDaily’s 2020 South Australian Business Index of the state’s top 100 companies.