The first half result is a massive turnaround from the company’s 2020 calendar year when it reported a $470 million loss amid significantly lower oil and gas prices and lagging global energy demand due to the COVID-19 pandemic.

The Adelaide-based oil and gas giant this morning announced free cash flow of US$572 million and underlying profit of US$317 million for the first half of 2021.

It will pay an interim dividend of 7.5 cents per share fully-franked, which represents 20 per cent of its first-half free cash flow.

South Australia’s largest listed company said the results reflected higher oil prices compared to the corresponding period due to recovery in demand, but were offset by lower average LNG prices.

Santos managing director and chief executive officer Kevin Gallagher said the turnaround demonstrated the resilience of the company’s base business and strong operational performance across a diversified asset portfolio.

“Consistent application of our low-cost disciplined operating model continues to deliver cost reductions and efficiencies despite cost challenges across the industry and COVID-related cost impacts in the base business,” he said.

In July the company revealed plans of a $21 billion merger with Sydney-based Oil Search, which has assets in Papua New Guinea and Alaska.

If it goes ahead, the union will create “a regional champion of size and scale” which would position the merged entity in the top-20 ASX-listed companies and the 20 largest global oil and gas companies.

“We will remain disciplined and cost-focused as we enter our next phase of growth and progress the proposed merger with Oil Search,” Gallagher said in the statement to the ASX this morning.

“I am pleased with the progress we are making on due diligence and look forward to the signing of a binding Merger Implementation Deed in the coming weeks.

“Since taking FID on Barossa in March, the project is off to a great start including the cutting of first steel for the FPSO turret, commencing manufacturing of subsea and export flowlines, and the assembly of subsea trees.

Fellow Adelaide-based oil and gas company Beach Energy yesterday reported a $317 million net profit after tax for the 2020-21 financial year, a fall of 37 per cent. It will pay a one cent per share dividend.

The company announced an 18.4 million barrels of oil downgrade to its reserves in the north-east of SA in April.

The net downgrade to its proven and probable (2P) reserves across the Western Flank oil and gas fields in the Cooper Basin came after recent declines in oil production and drilling results sparked an urgent review.

Beach Energy managing director Matt Kay told the ASX yesterday that while FY21 was a challenging year on the Western Flank, the company remained in a strong position as it delivered on gas projects in the Perth and the Victorian Otway basins. 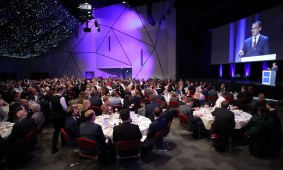 The company’s share price has fallen almost 15 per cent since yesterday’s results announcement. After opening at $1.21 yesterday, Beach shares were trading at $1.04 at 11am this morning.

Santos ranked No.1 in InDaily’s 2020 South Australian Business Index – an annual review of the top private and public companies in the state. Beach Energy was ranked No.4.