A $3.5 million overhaul of Kangaroo Island Spirits’ Cygnet River distillery, which is also owned by Might Craft, is also well underway and is expected to be completed before the end of the year.

The Adelaide Hills transaction is now complete with the group of craft brands officially joining Mighty Craft on July 19 with the organisational structure to be finalised in first 90 days.

The deal also includes 75 per cent ownership of the popular LOT.100 venue, a destination distillery, cellar door, restaurant, and function centre on an 84-hectare property near Nairne in the Adelaide Hills.

The brands join SA’s Kangaroo Island Spirits and Sparkke in the Mighty Craft stable, which also includes Seven Seasons, which was started in Darwin by former Port Adelaide footballer and Something Wild founder Daniel Motlop.

The businesses are expected to help Mighty Craft more than double total revenues this financial year to more than $78 million.

Melbourne-based Mighty Craft purchased KI Spirits and the 20-acre Cygnet River property its distillery sits on from founders Jon and Sarah Lark in March 2020 for just over $2 million.

Established by the Larks in 2006, KIS was one of Australia’s first dedicated craft gin distilleries. In recent years it began making the island’s first single malt whiskies.

In July last year, Mighty Craft unveiled a $3 million masterplan development for the Kangaroo Island distillery including a third still to increase the production capacity for the domestic and export market and a spirit tasting room and education space, which will overlook production.

The project will create 20 jobs during construction and around 25 ongoing jobs once completed. 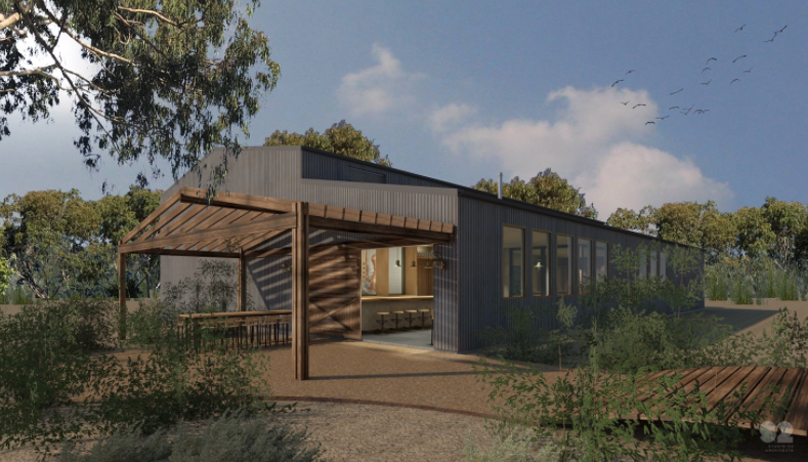 An artists’s render of the new KIS distillery.

The existing cellar door will also be upgraded to focus on serving visitors KIS spirits and cocktails in the native botanical garden that is home to more than 75 native species used in the making of the botanical driven gins including Native Juniper, Coastal Daisy Bush, Anise Myrtle and Lemon Myrtle.

In March this year, Mighty Craft also received a $500,000 grant from the South Australian Tourism Commission to develop a world-class experimental distillery on the island.

The company announced last week it had invested an additional $780,000 in the June quarter on a property on Kangaroo Island that will house distillery staff, provide a future facility to train distillers and eventually provide accommodation on the island for tourists.

“This property investment will, in the long term, generate a strong return for shareholders and is a key step towards realising our vision to make Kangaroo Island Distillery an iconic ‘must visit’ tourist destination,” the company said in its update to the ASX on Thursday.

The acquisition of the Adelaide Hills Group is expected to be a major boost to Mighty Craft’s whisky strategy with figures released last week showing Adelaide Hills Distillery will alone add 78,487 litres of mature whiskey to group inventories this calendar year.

A further 63,000 litres of Adelaide Hills Distillery whisky is expected to reach maturity before the end of 2023 adding to the about 45,000 of Mighty Craft whisky set to reach maturation by 2026.

The acquisition is expected to help grow Mighty Craft’s total spirit production capacity to 1.5 million bottles next financial year, making it one of the largest Australian craft spirit producers and a leading player in the emerging Australian whisky market.

Previously known as Founders First, the company changed its name to Mighty Craft in November and has been on a sustained period of acquisitions, culminating in the Adelaide Hills Group purchase.

Strong jobs market is an opportunity for diversity

“In the last two years we have progressed significantly from a pre-IPO business doing $4M revenue a year to a listed business doing $31m (cash receipts) in FY21 and we expect to deliver a transformational result of $78.7m in revenue and underlying EBITDA of $6m2 in FY22, post the acquisition of the Adelaide Hills Group,” he said.

“Mighty Craft is executing on its strategy by growing and acquiring scale quickly, exactly as we have outlined to the market.

“We remain very positive about the year ahead and will continue to update the market on our progress towards hitting our stated FY22 guidance.”