The Glynde-based business has recently appointed Jacqui McGill as a non-executive director effective from this month.

McGill, who now lives in Adelaide, was chief executive at Olympic Dam from 2015 to 2018 where she was responsible for 3500 employees, an airport, township and associated infrastructure.

She is also a former chair of TAFE SA and still holds a number of non-executive director roles including on the board of RAA, the Festival Centre and the Art Gallery of South Australia.

McGill’s appointment at Robern Menz comes at a time when the company is ramping up two major capital expenditure projects: the doubling of its honeycomb line and the re-introduction of the Polly Waffle chocolate bar.

The new honeycomb line will increase the company’s Violet Crumble capacity following a surge in demand during the coronavirus pandemic and increased exports to the United States and Asia.

The maker of South Australian favourites FruChocs and Crown Mints has become a national player in recent years since buying the Violet Crumble brand, recipe and production line from Nestle in 2017.

Robern Menz CEO Phil Sims said he reached out to McGill a few months ago after recognising the key role her experience managing huge capital projects at Olympic Dam could bring to the business.

“We understood that where our business is currently and where it wants to be, the skills and expertise Jacqui has would add enormous value,” he said.

“We have significant capex projects around doubling our honeycomb production line to create significantly more capacity in light of where Violet Crumble is going.

“Clearly Polly Waffle is something we have every intention of building a new production line around but obviously the challenges around COVID and international travel are holding that one up temporarily until we can all start travelling again.

“This is also about broader leadership, governance, management and all those sorts of skills as well.”

She said she planned to play a key role in providing business expertise, particularly around delivering projects within the confines of an operating business.

“It’s one thing to build a greenfield project site that’s completely standalone but it’s a completely different proposition to expand and grow within your organisation’s existing infrastructure,” McGill said.

“While miners dig stuff up, we also build stuff and the capital portfolio I was responsible for at Olympic Dam was in excess of $600 million and that included building lots of things such as infrastructure, power, dams and facilities and they’re the type things and the type of business discipline that will provide some value to Robern Menz.

The growth of the Violet Crumble brand has been strong, particularly in the past 12 months.

At the same time, exports to the Philippines, Singapore and the United States have also ramped up.

Robern Menz began shipping Violet Crumbles to the US in 2018 and opened an office in California this year. 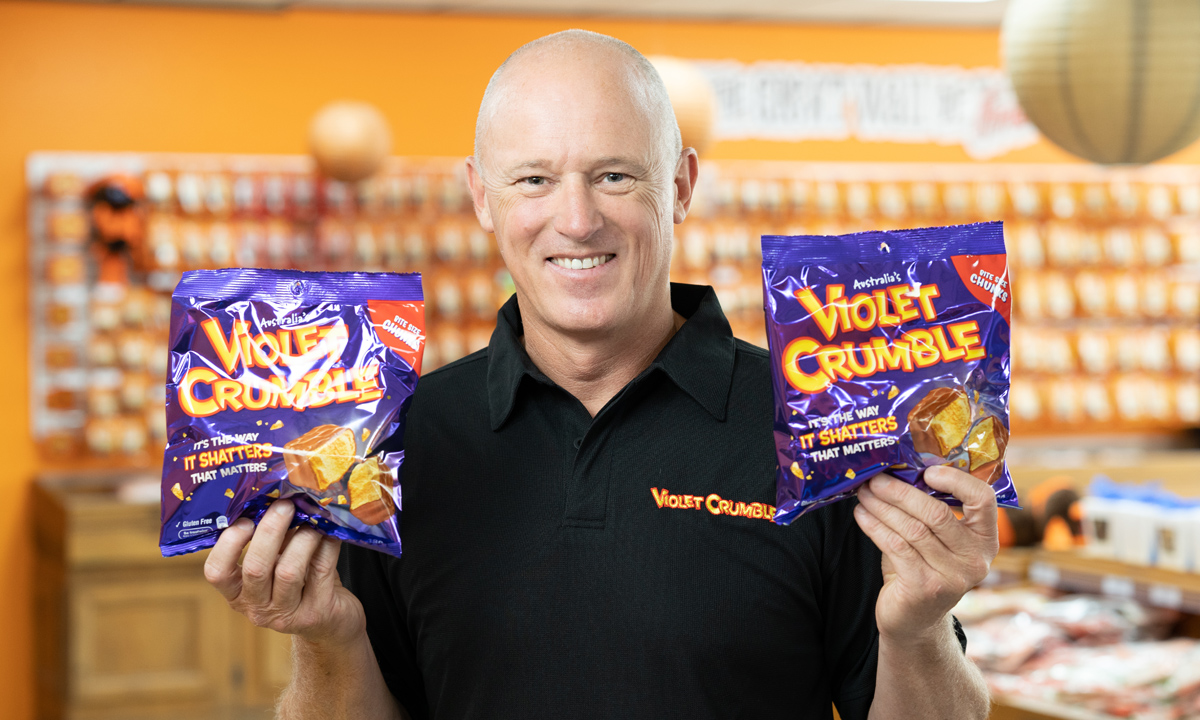 Sims said the equivalent of a shipping container every four weeks was being sent across the United States, a volume that that was rapidly building.

He said growth to the US was forecast to grow fivefold over the next five years.

“The next step now is setting up our own company so we can direct import into the United States and we’re closer to the customer, which gives us more confidence around investment decisions because we’re controlling the product more in the country,” Sims said.

“That’s not to say our direct importer doesn’t continue to have a key role, they do but it’s more as our preferred distributor, not our exclusive importer.

“We’re in about 2500 stores in the US and they’ve got more than 50,000 so we’re only scratching the surface over there and we’re not in any of the big majors so there is enormous opportunity but we’ve just got to make sure it’s responsible growth in that if we pick up one of the big guys, that we can actually supply.”

Robern Menz expects its exports will grow from about 9 per cent of total revenue to close to 25 per cent in the next five years. The company’s overall business is also expected to more than double over that period of time.

In other export markets, the Philippines has grown to more than $1 million in revenue within the first 12 months and includes distribution through 5000 7 Eleven stores.

Shipments are also regularly sent to and the South Pacific.

While the Violet Crumble boom has been great news for the company, the need for a new honeycomb line is starting to hamper further growth.

“We’ve got about 160 on our payroll at the moment, which represents about 135 FTEs and when we bought the Violet Crumble that was about 70 FTE,” Sims said.

“We’ve got about a dozen on night shift and that didn’t exist 12 months ago and our afternoon shift is almost as big as our day shift.

“There is no question that in these sorts of times people gravitate towards trusted brands and iconic chocolate bars certainly fit that bill.”

Sims said the company would get moving to build the new line “as quickly as we can”.

“The opportunity is alive now but the reality is we’re hoping it’s going to be 2022 but it might push into early 2023,” he said.

“We’re fortunate with this project in that we make honeycomb, we make Violet Crumble and a lot of it so it de-risks the project because we understand what we are doing.

“It’s just about having cookers that are bigger, a new cutting system and we’re dealing with existing suppliers in Australia and most of the equipment is being manufactured in Australia as well so that’s why we absolutely have the confidence to move ahead with this with haste.”

The Polly Waffle project is not so simple.

Melbourne-based Hoadley’s Chocolates, which was later bought by Rowntree in 1972 and then Nestle in 1988, introduced the Violet Crumble in 1913 and followed it with the Polly Waffle in 1947.

The Polly Waffle is a combination of chocolate, wafer and marshmallow and like the Violet Crumble developed somewhat of a cult following in Australia.

Robern Menz bought the rights to the Polly Waffle in January 2019, a decade after Nestle stopped making the bars, with the initial aim of having it back in production this year.

It received a $1 million federal grant in April 2020 towards building a new production line for Polly Waffle.

But international travel restrictions have slowed the project as it relies on a key piece of equipment for manufacturing the wafer component that sits between the marshmallow and chocolate layers.

“We’ve produced a lot of marshmallow over the years and we certainly know how to produce chocolate so it’s more about the wafer, that’s the newer technology and the riskier part of the project for us,” Sims said.

“The supplier overseas is not known to us so we want to be there to do the factory acceptance testing to make sure this stuff is going to do what we expect it to do so that’s been a significant issue.

“While all that’s happening, COVID is happening, Violet Crumble takes off and that’s the immediate opportunity here and now – we need to produce more because we are maxxing out the production line so we’ve had to pivot.

“The Polly Waffle project has slowed down while we’ve been waiting – it’s certainly not on hold – we’ve worked out a production line, we’ve got key suppliers, we’ve got budgets, we’ve done prototypes of products, which taste fantastic by the way.”

Sims said while it was difficult to say what the new Polly Waffle timeline would be, the downtime had not been wasted.

“When you produce a chocolate bar you don’t always have the luxury of letting it sit around for 12 or 14 months to see how it behaves to make sure it is still edible at the used by date so all of that sort of stuff is happening while we’ve got a bit of time.

“You don’t want soggy wafer and you don’t want rock-hard marshmallow and they basically sit next to each other so the moisture transfer from a high moisture product to a very dry product, how do you stop that – we’re very confident we’ve worked that out.”

The key is likely to be when international travel can begin again so the Robern Menz team can visit the suppliers.

“We’ll execute the honeycomb expansion as quickly as we can and we’ll get back on to the Polly Waffle as soon as travel allows.

“Also, as a business, we’ve got to make sure the factory is not too chaotic, we’ve got to manage an efficient production facility while a significant capex project is going on with contractors in the facility.

“Running both major projects at the same time would be challenging but hopefully as we get into the back end of the honeycomb project we can start getting our teeth into the Polly Waffle project.

Read our weekly Corporate Ladder column in BDO Business Insight for all the latest business appointments.