The Federal Government last week announced a 30 per cent refundable tax offset for eligible businesses that spend a minimum of $500,000 on qualifying Australian games expenditure.

The investment is expected to create a new wave of Australian video game development, leading to more Australian-made games and bringing new Australian voices and stories to a global audience.

Last year, South Australia became the first jurisdiction in Australia to introduce a rebate for the video games industry by offering a 10 per cent rebate in a move to drive job growth and attract international investment into the state, in a sector worth more than $250 billion globally.

As the first state in Australia to offer a dedicated rebate to video game companies, the announcement by the Australian government now puts South Australia at the forefront to attract and foster video game developers.

In 2018, a similar state-based rebate for Visual Effects, Digital and Post Production boosted South Australia’s creative industries with the outcome of the blockbuster film Mortal Kombat being produced in South Australia.

“The 30 per cent rebate from the federal government will be a rocket for the South Australian games industry,” Lawrence said.

Dan Thorsland, an SA-based game development consultant who has been in the industry for more than 35 years, said that up until now, the Australian video game industry had relied almost entirely on American cash proceeds. 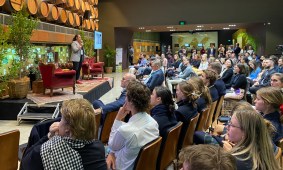 “This tax package now targets the Australian industry that overwhelmingly creates its own stories, and keeps those stories in Australia,” Thorsland said.

“It comes from [Australia] and it is owned by the company that developed it. It’s not service work for a big international movie, but it’s more important for the community that intellectual property remains here.”

South Australia has a growing games development sector, led by a mixture of international, independent and established mid-sized companies and access to world-standard graduates from local universities that use cutting-edge AI, data analytics, visualisation and cyber.