Wine Australia figures released today showed Australian wine exports for the 12 months to December 31 were $2.89 billion, down from $2.998 billion in the year to September 30.

The decline was largely in line with a $110 million fall in exports to China to $1.15 billion for the year compared with the 12 months to September 30.

The Chinese Ministry of Commerce (MOFCOM) announced it would impose interim tariffs of between 107.1 per cent and 212.1 per cent on Australian wine in containers of up to two litres from  November 28, directly impacting the final five weeks of the 52-week reporting period.

MOFCOM then announced an additional temporary countervailing duty deposit from  December 11 of between 6.3 per cent and 6.4 per cent on Australian wine.

The investigations are due to be completed in August 2021 but can be extended for a further six months.

Wine Australia Chief Executive Officer Andreas Clark said wine exports hit a record year-on-year value of $3.1 billion in the 12 months ended October 2020, before recording a steep decline in the final two months of the calendar year. The previous year-on-year high point had been $3 billion reached in 2007.

Clark said there had been a sharp increase in exports from August to October, primarily to mainland China and the United Kingdom (UK), while the decline in November and December was predominantly in exports to China.

He said that, unsurprisingly, exports to mainland China were immediately down following the imposition of the tariffs in November. 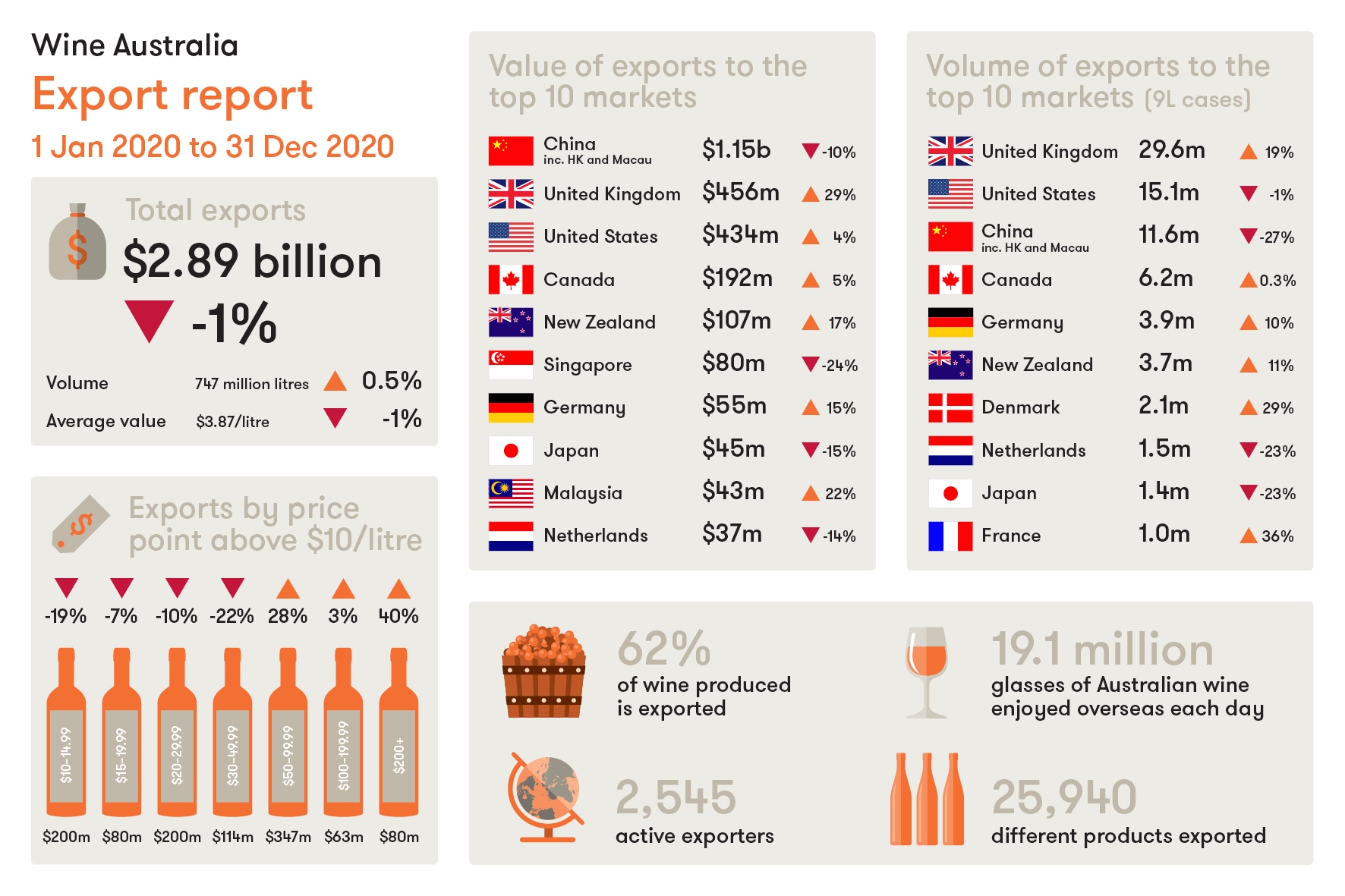 It was expected that exports to China would remain low in the coming months, significantly affecting total export numbers during 2021.

But the decline in exports to China has been offset by significant growth in exports to Europe, up 22 per cent to $704 million – the highest value in a decade.

The UK continued the strong growth that commenced at the advent of the pandemic due to increased demand, which was then boosted in the months leading up to Brexit.

Exports in the 12 months ended December 2020 to the UK increased by 29 per cent in value to $456 million and 19 per cent in volume to 266 million, extending the UK’s lead as the biggest destination for Australian wine exports by volume.

Today’s figures show that despite the overall decline in value in the year to December 31, global export volumes grew by 0.5 per cent to 747 million litres.

The average price received for Australian wine increased by 9 per cent to $1.71 per litre FOB, the highest level since September 2011.

“Wine businesses are resilient and are already adapting to these changed market conditions, increasing their engagement in markets other than China, particularly the UK, USA, Canada and the domestic market,” Clark said.

Clark said that there was a decline in value across most price points with the notable exception of exports under $2.50 per litre FOB, which grew by 17 per cent, driven by increased shipments to the UK, New Zealand, Scandinavia, Germany and Canada.

After declining for the three previous calendar years, the total value of exports to the United States increased, despite the widespread effects of the pandemic and the political turmoil that engulfed the country during the year.