As we say adios to the chaos of 2020 and wish for a much less crazy 2021, many are pondering what sustained impact will the last year have on our attitudes and behaviours.

“A buoyant economy likely needs a balance between risk avoiders and seekers, and Square Holes’ research raises caution that now more than ever South Australia needs those willing to try new things, create innovative businesses and strive for a prosperous future,” Dunstone said.

From Square Holes’ research throughout 2020, Dunstone said younger South Australian adults found it psychologically tougher than others, yet were more financially confident.

Older South Australians measured as more psychologically resilient and took 2020 as simply an illustration that life is tough, but are less willing to take risks and more worried about their financial situation.

“South Australians aged 18 to 49 were more likely to be self-proclaimed risk-takers.”

Over twice as many South Australians viewed themselves as low-level risk-takers than high level, the survey found, with the gap wider for older age groups and narrower for 35-49 year olds and males. 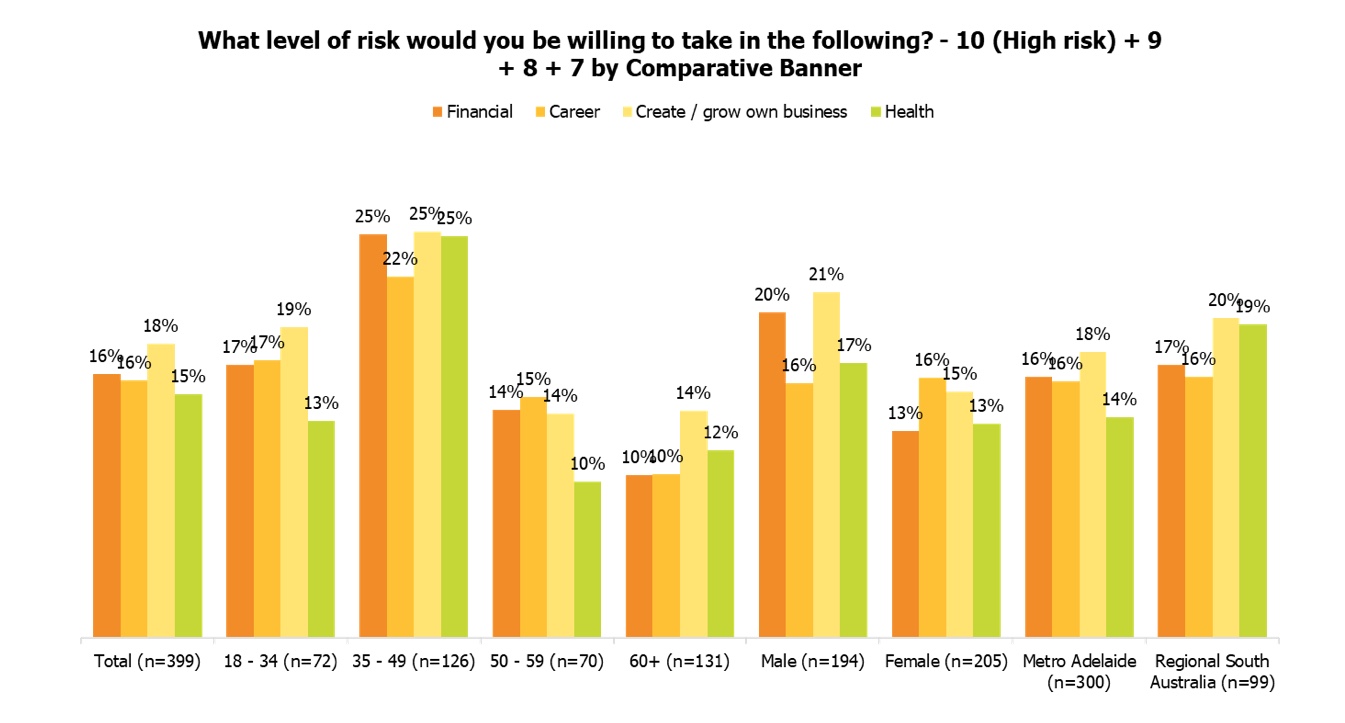 Six in ten South Australians aged 50+ view themselves as low-level financial risk-takers (rating 0-3 out of 10).

“There are significantly more low risk-takers in South Australia than high risk-takers, in areas of financial risk, as well as career and creating a business. With the younger versus older patterns consistent across career, business and health risk,” Dunstone said. 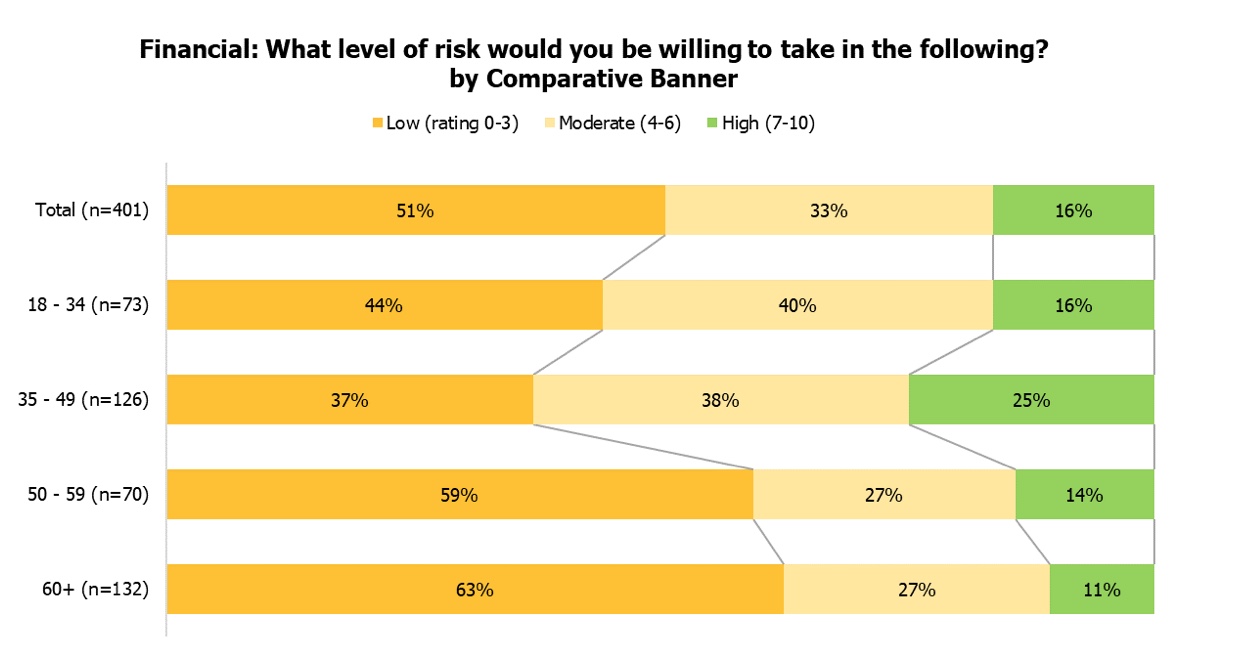 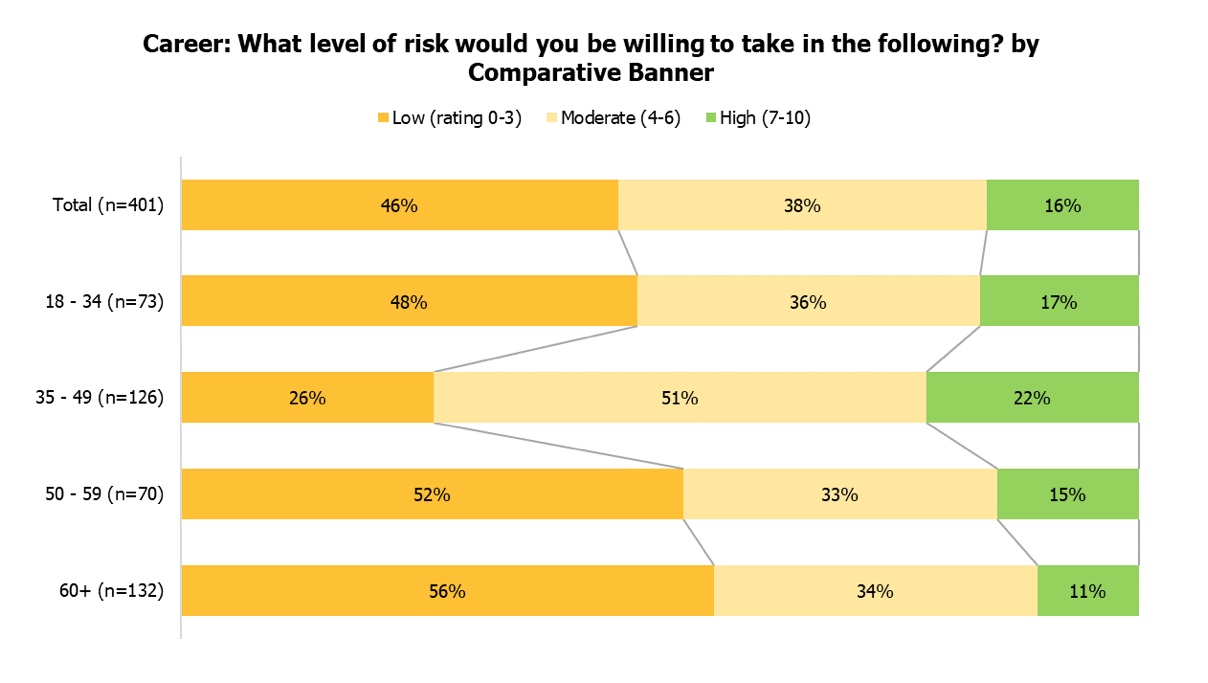 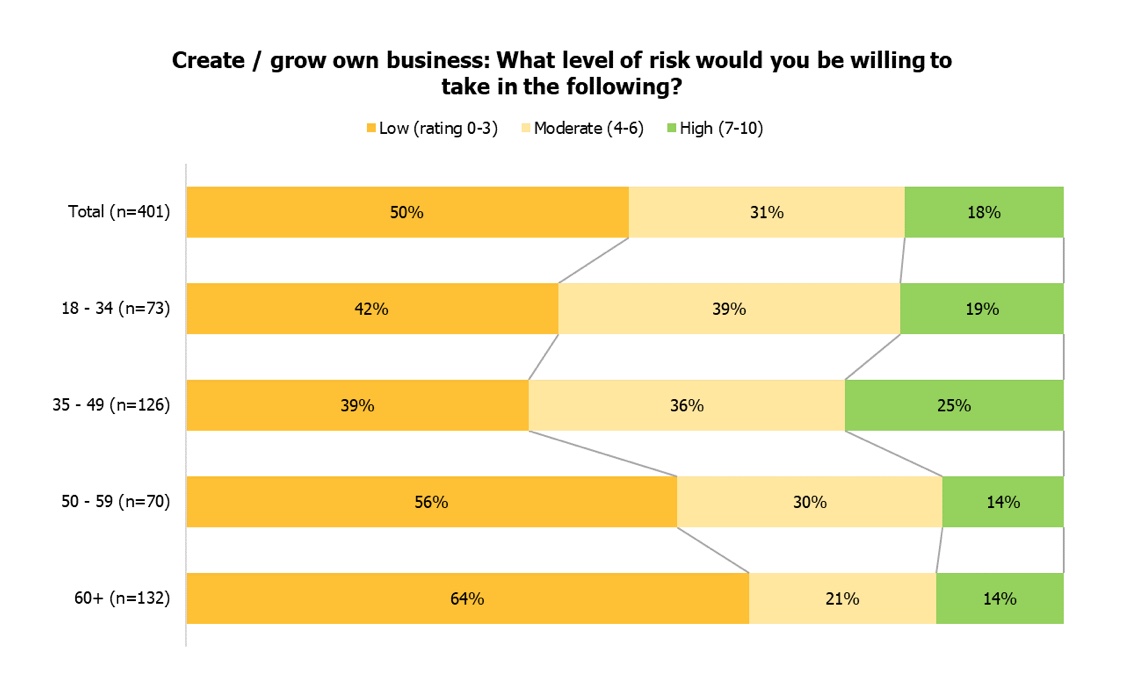 Dunstone said that 2020 has had a slight downward pressure on the desire to take risk of South Australians compared with the end of 2019,  with 12 per cent more likely to take risk and 18 per cent less likely.

“Only around 4 per cent of South Australians aged over 50 are more likely to take risk than the same time in 2019, with the level of risk taking for 18 to 34 years increasing,” he said.

The uncertainly of Covid-19 continues to encourage many to be risk-averse, to seek safety.

As one of the Square Holes research participants noted “because the future is unpredictable, and you feel as if anything could happen after the experience of Covid this year”. Yet, for others 2020 has encouraged them to have a “new outlook on life”.

Square Holes also measured the alignment of survey respondents against a set of 20 statements used to measure risk taking and sensation seeking.

Those with high levels of sensation seeking are said to be people more likely to start new businesses, seek innovation, as well as to try new things such as music, arts, travel and other exciting experiences.

“To measure a person’s level of sensation seeking they are asked to rate ‘how much like them’ are 20 statements,” Dunstone said.

“What is interesting is that the instability of 2020 has had a very small overall impact when compared with benchmark figures recorded 2017, yet small increases across all but two of the 20 statements.” 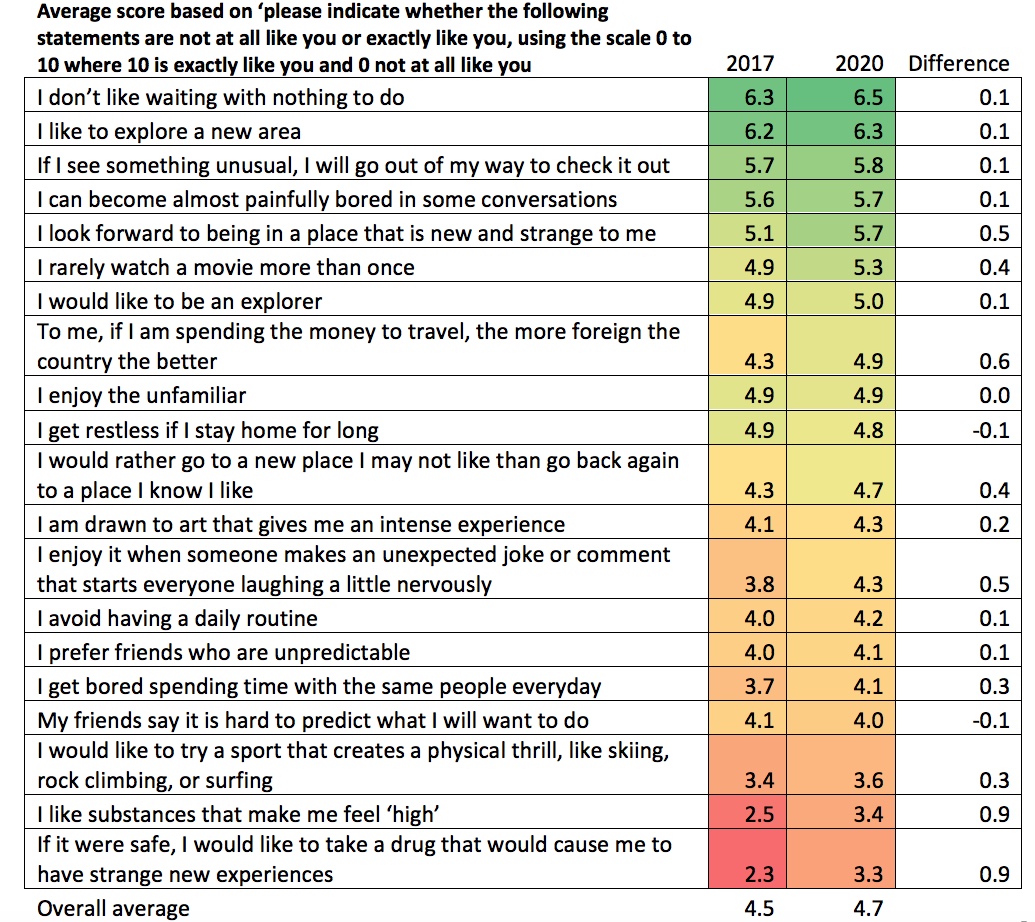 However, Dunstone said that looking at 10 of the statements there has been a decline since 2017 of those identifying the statements as strongly associated with them, with more indicating mid-level associations.

“This may illustrate South Australians as a bit less hungry for new sensations or risks as a result of 2020 compared with 2017.”

“While risk may not always be appropriate to encourage, a desire to take risks is also a key ingredient to a prosperous economy and culture,” Dunstone said.

“How can we provide a ‘safe’ environment for risk taking and encourage those willing appropriate permission to do so?”

Dunstone said that Square Holes explored a related topic in December: has South Australia got the right balance of laws, rules and regulations to protect the community fairly without removing individual freedom and responsibility?

“There is clearly a contrast of views across the community,” Dunstone said.

He said that while there was a  general sense that ‘South Australia has the right balance of laws, rules and regulations to protect the community fairly’ (47% gave a rating towards ‘the right balance of rules to be fair), one in five (22%) were skewed towards believing ‘South Australia has too many laws, rules and regulations and removes individual freedom and responsibility.’

South Australians aged 18-34 were the most supportive of South Australia’s rules balance, with those aged 35-59 more likely to feel the state has too many laws, rules and regulations and removes individual freedom and responsibility. 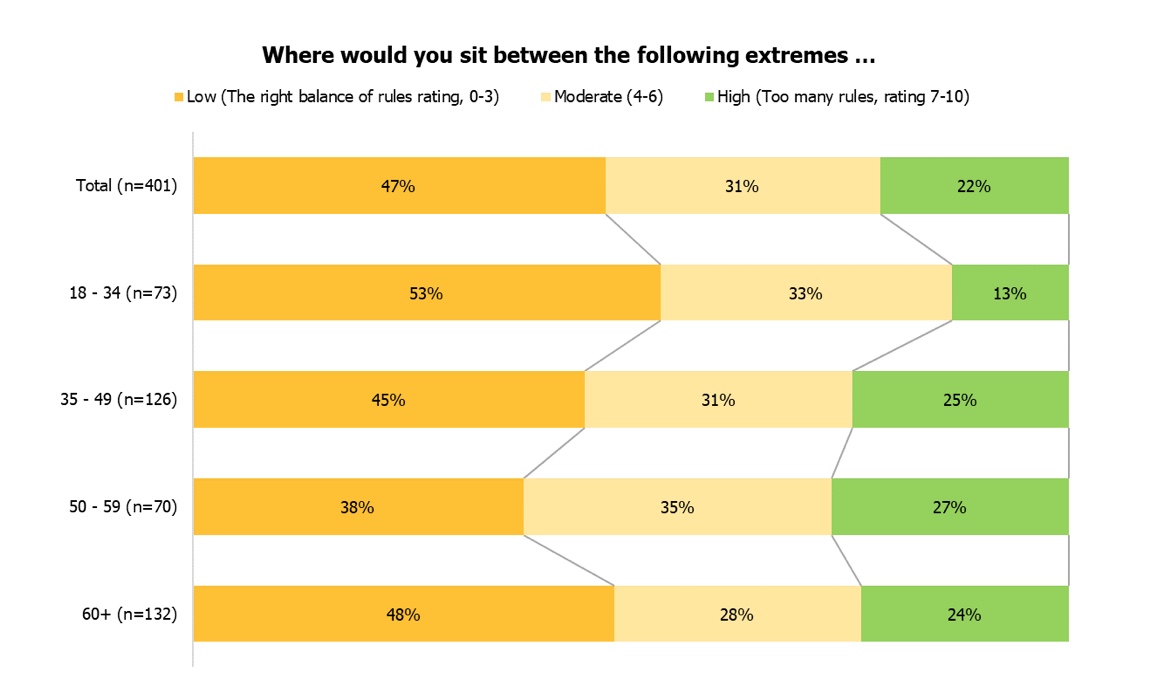 “We have good balance of rules and regulations without going over the top,” noted one participant. 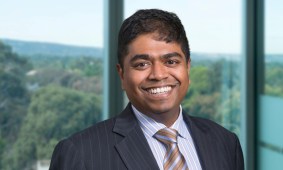 In contrast, another participant exclaimed, “this insanity dictatorship over a ‘scamdemic’ virus has been used to remove ALL of our human rights and liberties.”

Dunstone said that 2020 has had a small downward pressure on the willingness to take risks, although some segments of the community have taken the year of chaos to take risks.

“Many South Australians have been triggered to try new things in 2020, new art, and local products and tourism options, or even start a business.

“How can the government and broader community encourage positive risk taking?”