About 402 respondents from across nine regions – including the Riverland, the Fleurieu Peninsula and Kangaroo Island – participated in the Business SA, Chamber of Commerce and Industry South Australia report, Regional Voice 2020.

The survey reported that the top issue for both individual business respondents and regions overall was skills availability, followed by COVID-19 restrictions.

Labour costs rounded up the third spot for individual businesses while population growth was number three across the regions.

The report said limited community infrastructure and access to necessary services, as well as an ability to attract highly skilled people, were contributing to the shortfall of skilled workers and professionals.

Business SA CEO Martin Haese said businesses had indicated they were struggling to attract skilled staff to regional areas, even when offering competitive rates of pay.

While 15 per cent of respondents said they found it difficult to attract high skilled people when offering competitive rates of pay, 23 per cent said they had no issues attracting the appropriate people – although this was down from 29 per cent in the previous two surveys.

“A lack of access to community infrastructure and necessary services were also raised as key barriers to finding people willing to move to the regions,” Haese said.

He said a reduction of “red-tape” in relation to council development applications was key to growth in the regions, as well as greater investment in economic infrastructure, including in roads and ports.

The report also highlighted investment in social infrastructure and a reduction in overall costs as top priorities for regional businesses.

Reliable telecommunications was a concern for regional businesses, with 40 per cent of respondents either dissatisfied or strongly dissatisfied with mobile coverage. 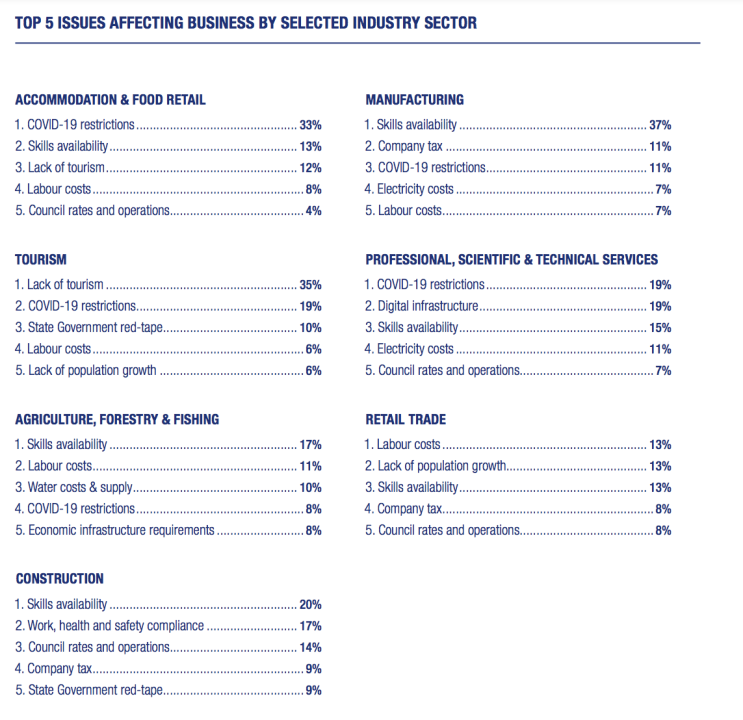 The 2020 report also found the 2019/20 bushfire season had directly impacted 10 per cent of respondents, with 27 per cent indirectly affected.

Of the businesses directly impacted 55 per cent were based in either Kangaroo Island or the Adelaide Hills.

Overall, Kangaroo Island respondents were most greatly impacted, with 90 per cent either directly or indirectly affected.

Across the bushfire impacted regions, 36 per cent of respondents said they had benefited from financial support.

“Many businesses who weren’t directly impacted by fires, still felt the impacts the fires had on the local economy,” Haese said.

“A key issue raised in the survey was the mental health impact of the bushfire tragedy, and businesses are looking for further help on that front.”

The report followed data of 100 South Australian hoteliers, which found 86 per cent of respondents indicated their mental health and wellbeing had been impacted by the coronavirus.

A mental health and wellbeing program is expected to be rolled out to 1000 hospitality staff in early 2021 to assist the industry following the turbulent year.

Haese said despite the bushfires and the impact of the coronavirus, regional businesses were still “relatively confident about their future” and had rebounded strongly.

But compared with the 2018 report, regional business confidence had dropped significantly from 129.8 to 89.5.

The report said the regional confidence index tracked closely with the broader state index, with regional businesses at their most confident directly after the 2018 state election.

While the Riverland had the highest level of confidence – 15.9 points above the overall level – the three regions with the lowest levels of confidence were some of the greatest hit by the last bushfire season.