The Emerging Markets Program will develop a series of resources on each of the four markets to help wineries know what to expect and how to prepare. Each resource will consist of a market overview of each country, information about sales channels, an in-depth consumer profile and a guide to doing business in each market.

SAWIA chief executive Brian Smedley said the program aimed to equip wine businesses with the tools and opportunities they needed to enter the four emerging markets.

“We’ll also provide case studies, a guide to conducting tastings and explore traditional wine and food pairings in each market,” he said.

“If they then decide to travel to those markets or engage with them virtually, they will be aware of the tips and traps that they might face and be able to showcase their wine to interested persons in a structured way.

“This program is welcome good news for South Australian wine businesses given uncertainty in some of our existing export markets.”

The second part to the Emerging Markets Program is the development of a turn-key South Australian wine education program for decision-makers in each market, including wine importers, buyers, distributors and hospitality professionals.

“We’re aiming to equip wine businesses with the tools and opportunities they need to enter these emerging markets, which will assist with business sustainability during this COVID-19 recovery phase,” Smedley said.

“We’ll explain the current performance and perception of Australian wine in each market and the opportunities for South Australian businesses.

“We’ll also provide case studies, a guide to conducting tastings and explore traditional wine and food pairings in each market.”

The second part to the Emerging Markets Program is the development of a turn-key South Australian wine education program for decision-makers in each market, including wine importers, buyers, distributors and hospitality professionals.

“We’ll be promoting South Australian wine, our stories, our people and our regions,” Smedley said. 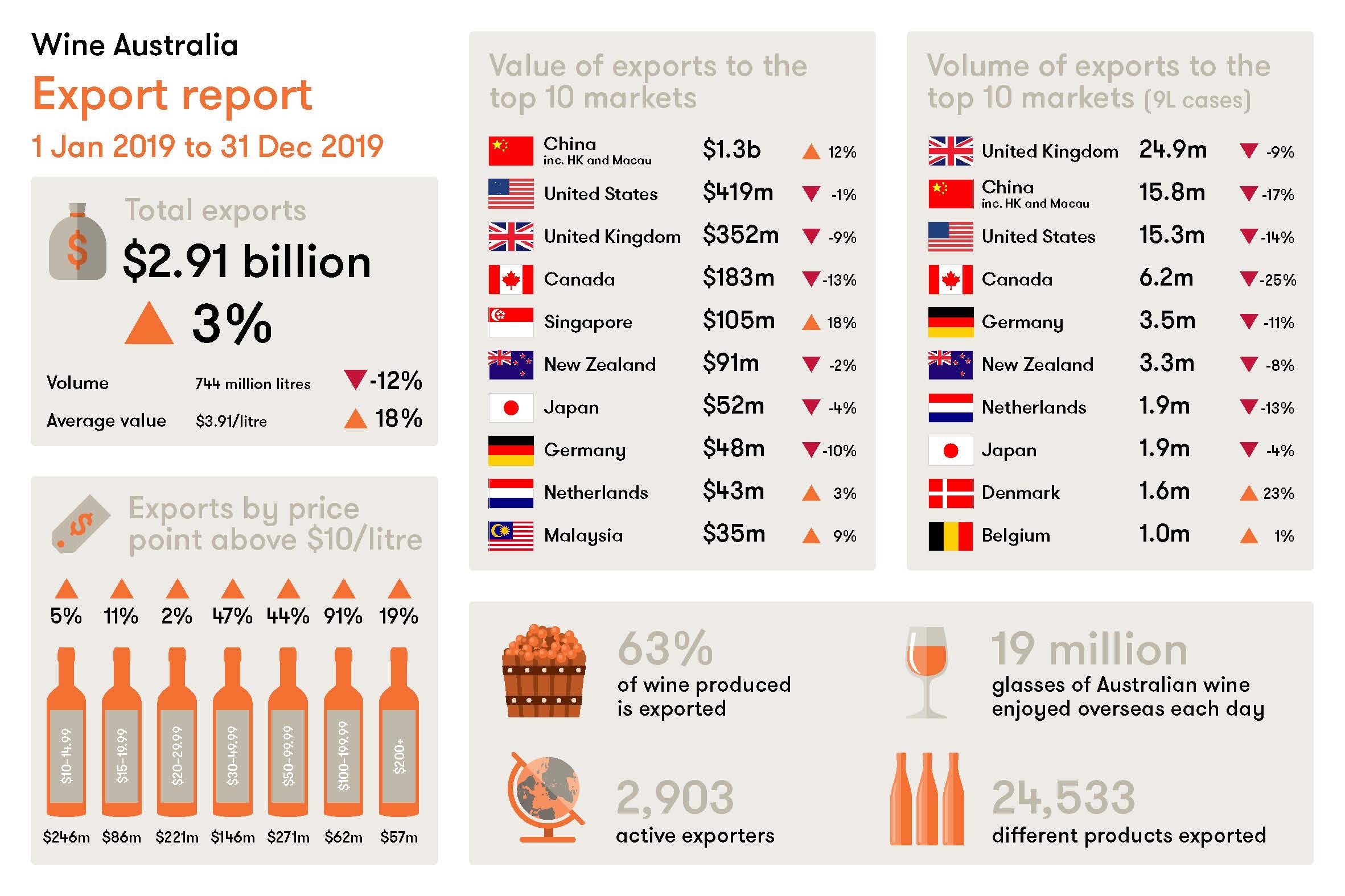 2019 was a bumper year for Australian wine exports but 2020 is shaping to be much quieter. Image: Wine Australia

Today’s program launch comes at a time when exports to Australia’s biggest offshore wine market, China, continue to be under threat.

In August, China announced it had launched an anti-dumping investigation. Companies asked to provide information to the probe, including Penfolds parent company Treasury Wine Estates and Casella Family Wines, had until mid-November to complete questionnaires to assist the Chinese Government with its investigation.

A second investigation was subsequently launched by China into countervailing duties and involves the same companies with the addition of Pernod Ricard, the makers of Jacob’s Creek.

China is yet to officially announce the outcome of the probe or any potential penalties but Smedley said there was still a lot of uncertainty for SA wine companies.

“There are a lot of situations where companies have decided to cease shipments until the certainty becomes known,” he said.

“There have been some cleared to warehouses and some that haven’t been cleared, almost all the permutations you can think about that’s what’s happened.”

The new export program will be rolled out one country at a time, starting with Japan potentially before the end of the year.

The full set of resources is expected to be available by June.

Smedley said the program was a timely reminder that there were other potentially lucrative Asian markets available to small and medium SA wine businesses.

“This is simply a reminder that there are other markets that are within close proximity to Australia that might be opportunities.”

According to Wine Australia figures released last month, Australia exported $2.99 billion worth of wine in the 12 months to September 30 with China accounting for $1.26 billion of that.

Japan is Australia’s eighth-largest export market while Malaysia, India and South Korea are all outside the top 10.

SAWIA’s Emerging Markets Program is a partnership with the South Australian Government Department of Trade and Investment and will be completed by June 2021.

Trade and investment minister Stephen Patterson said there were huge opportunities for wine producers to enter new markets including Japan, Malaysia, South Korea and India, which were regions of focus for the Marshall Government.

“South Australian wine is regarded as some of the best in the world and upskilling wine producers with market intelligence will assist them in understanding consumers, sales channels and provide great insight into doing business in each of these regions,” he said.