She is also in charge of managing the Adelaide City Deal – which aims to grow and innovate the city – as well as programming the long-term governance of the state’s progressive neighbourhood as it built a 6000-worker capacity district across business, education, culture, wellbeing and entertainment.

While the decade-long project is expected to be complete by 2028, Dixon said the precinct is already home for about 1000 workers and would continue evolving after completion in line with the changing industries and businesses.

She said when she relocated from Queensland for the role 12 months ago, Lot Fourteen was heavily in its “refurbishment and demolition” stage and appeared “very much a demolition/construction site”. But much has happened in the time since.

One of the largest components of the Lot Fourteen investment has been the $649 million Adelaide City Deal, which was part of an agreement between the South Australian and Federal governments to support the state’s growth in innovation and cultural projects.

Within the Lot Fourteen district, the deal includes the development of the Entrepreneur and Innovation Centre, the Aboriginal Arts and Cultures Centre and the International Centre of Hospitality and Tourism Studies.

“We did a strategic business case this year, which really identified that if we wanted to create something of not only national recognition, but of international attraction, in terms of cultural tourism, then we really needed to look at a slightly larger budget, if we were going to do something truly unique and impactful,” Dixon said.

It follows a report by InDaily that the gallery would house more than 30,000 anthropologically and spiritually significant artefacts from across Australia. It is expected to open in 2025.

Of the Adelaide City Deal, $60 million has been allocated to the development of an International Centre for Food, Hospitality and Tourism Studies, in a bid to attract interstate and overseas students to South Australia.

Dixon said the Centre would be a learning facility for people pursuing a career in hospitality and tourism.

“The Centre will raise the standard of training by offering top-tier courses and programs.”

This will attract people seeking to learn from the best so they can graduate with the skills and qualifications they need to embark on a successful career in the globally competitive food, hospitality and tourism sectors,” she said.

“The graduates will contribute to the supply of skilled and qualified talent that will strengthen Adelaide’s reputation for excellence in food, hospitality and tourism.”

She said an architect-led design team was being sought to develop a concept design with construction set to begin in late 2021.

The final piece of the puzzle is the “iconic flagship” Entrepreneurial and Innovation and Centre.

The centre, to be housed in a new 16-storey building, is described on the Lot Fourteen website as the “iconic flagship” of the innovation precinct, which will “set the global pace for multidisciplinary innovation, collaboration and entrepreneurship”.

The building is expected to total 35,000 sqm of lettable area for startups and entrepreneurs, with construction to be complete by the end of 2023.

Dixon said a proposed plaza linking the centre with Lot Fourteen’s refurbished heritage buildings – which she said were almost all completed – would be a major feature of the public space. 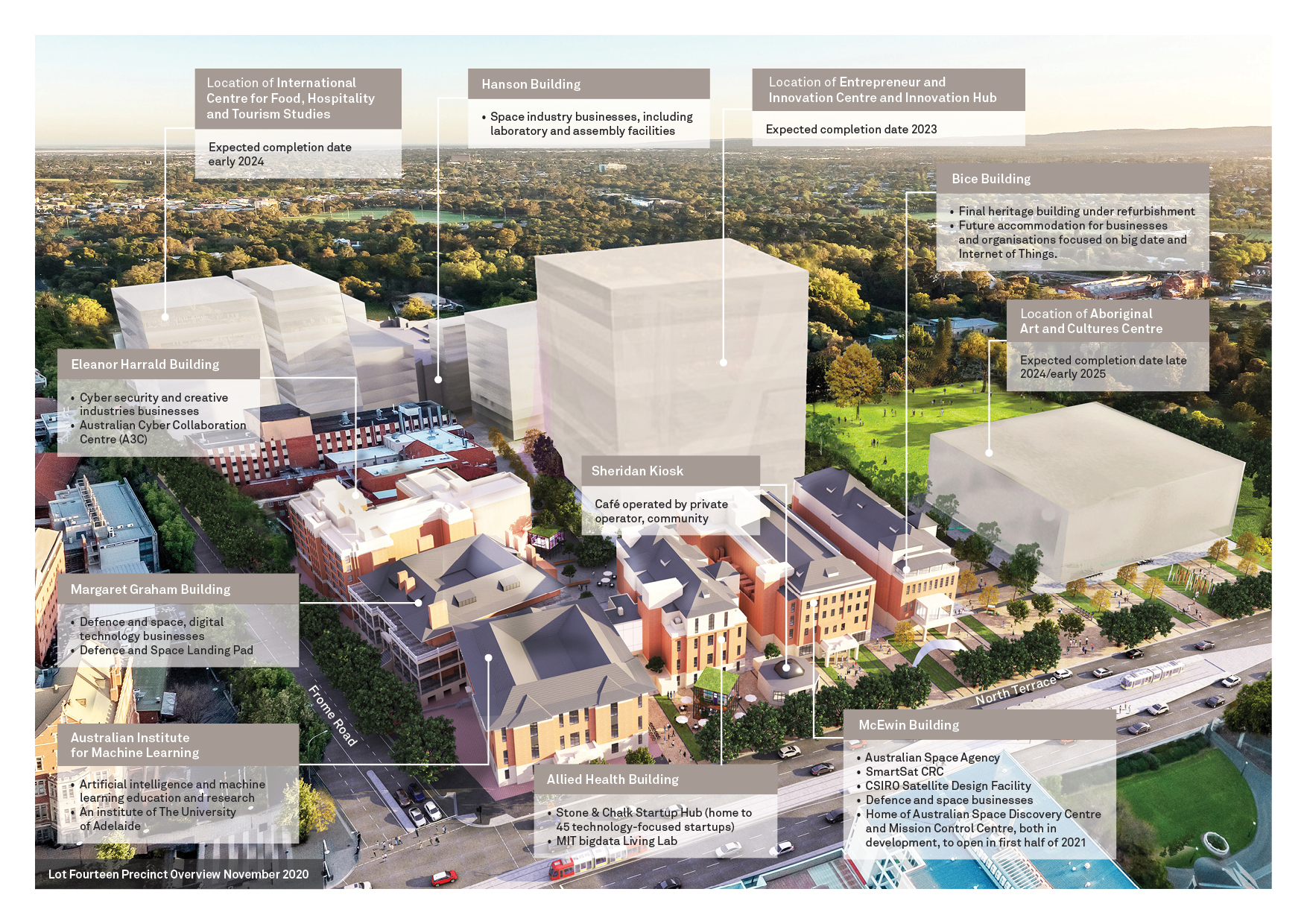 An artist’s impression of the Lot Fourteen precinct.

In July, the Australian Cyber Collaboration Centre, known as A3C, was launched in the Eleanor Harrald Building, which was previously nurses’ quarters, in Lot Fourteen.

The A3C, which was established as part of $10 million in state government funding, aims to raise awareness of cybersecurity career pathways, increase the number of skilled workers through an academy and offer a cyber test range facility.

While the building itself is designed to support the development of a global cyber workforce and bring together education, industry and business sectors.

Dixon said the Eleanor Harrald Building would be among a range of facilities that housed cybersecurity and creative industry businesses as more developments across the precinct were completed.

Located in the precinct’s McEwin Building are a range of space industry developments, including the Australian Space Agency and SmartSat CRC.

Dixon said the ground floor was dedicated to the Mission Control Centre and Space Discovery Centre, which would be managed by Questacon to focus on pathways in business and industry for space.

“That’s being fitted out at the moment and we’re anticipating it will be open by April next year. The remaining space in that building is for space-related companies,” she said.

“There’s a whole lot of applications for the use of space and so we wanted to use the centre in the Lot Fourteen setting to have it very much focused on school-aged children, which is such an inspirational pipeline to help them understand what pathways you can actually peruse through space.

“We’ve also got Stone and Chalk operating a space startup incubator facility in that building too, so it’s very much a space research business cluster.”

The Australian Institute of Machine Learning

A co-investment by the State Government and the University of Adelaide, the Australian Institute for Machine Learning sits on the corner of North Terrace and Frome Road in the precinct’s southwest.

Dixon said the Institute combined government and academic through a collaboration with the University of Adelaide, which sought to place South Australia at the forefront of machine learning across industries including agriculture, medicine, transport and advanced manufacturing.

She said the artificial intelligence and research hub’s close proximity to other companies across hi-tech sectors further provided partnership opportunities.

Machine learning is a field of computer science that enables computers the ability to learn without being programmed.

AIML researchers are seeking to advance understandings in areas such as robotic vision, medical machine learning and 3D modelling.

It is currently home to 45 technology-focused businesses as well as the MIT bigdata Living Lab, an initiative between the South Australian Government, Massachusetts Institute of Technology, Bank SA, Optus and DSpark.

According to the Department for Trade and Investment website, the bigdata Living Lab uses MIT’s data tools to understand social interactions across South Australia.