Naval Group Australia announced the local manufacturing package on Friday as it opened a new base at Port Adelaide and worked towards building its 250-strong workforce ahead of opening a construction yard at Osborne.

French-based Naval Group, formerly known as DCNS, won the contract to build 12 Attack Class submarines for the Royal Australian Navy as part of the Future Submarine Program costed in 2016 at $50b, to replace the ageing, Adelaide-built Collins class submarines.

Naval Group Australia said Australian manufacturers would eventually be called up to supply 23 specialised submarine parts, following industry fears that much of the component work would flow back to France.

The firm said that it expected its workforce to increase to over 1,700 direct jobs by 2028 with many more indirect jobs being created through the life of the program.

“As we approach the next design phase in January 2021, this is a critical phase of the program where we are in the process of designing and selecting more than a million submarine parts that need to work perfectly together,” she said.

“The skills and knowledge to manufacture this equipment and others will progressively be transferred to Australian industry as work packages are released to industry as part of the Government’s sovereignty objectives.

“The Government continues to work with Naval Group to maximise opportunities for Australians, and in particular, train Australian workers in France, to generate the competency and skill to be able to then train the Australian-based workforce as early as possible.”

“I have said from the outset that our Government will have the backs of Aussie workers,” Minister Price said.

“The decision to manufacture these essential pieces of equipment in Australia demonstrates our commitment to create new opportunities and jobs for Australian businesses.

“This is a significant step in the right direction to build up Australian capability in the Morrison Government’s Future Submarine Program.”

SA Senator and Trade Minister Simon Birmingham said it “reinforces South Australia as the home of our nation’s rapidly growing defence industry which is delivering thousands of cutting-edge jobs locally”.

In an InDaily opinion piece last week, Opposition defence spokesman Richard Marles criticised the Morrison Government over a lack of a decision on whether  Collins-class submarine maintenance would be undertaken in SA or Western Australia, and budget and construction timeframe blowouts for the Future Frigates to be built at Osborne. 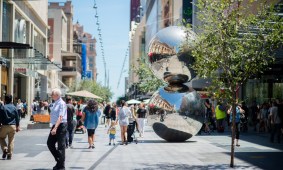 Chance for SA business to have say on tough year

Marles also said that costs for the new submarines had “blown out by nearly $40 billion, promises about Australian content are in tatters, and the first one won’t be operational until the mid-2030s, a decade later than originally promised”.