Having weathered the lows of March when South Australia entered a brief, semi lockdown, the latest Square Holes mind and mood survey at the start of September has found confidence in the community has nearly bounced back to normal levels.

“While as yet not back to pre-COVID levels, and below levels of May and June 2020, confidence is consistent with levels recorded since 2014, with 35% confident and 22% unconfident about the next 12 months,” Square Hole managing director said.

But, as the following flat graphs indicate, only a COVID-19 lockdown seems to shake the SA community enough into action. With an even split of positive and negative stretching on over years, it’s not surprising the state’s economy remains steadfastly flat.

“One of the issues I see with SA, and wider Australia, is a general complacency,” Dunstone said of the results.

“We don’t need to try too hard, to rock the boat, innovate, as it’s OK, pretty stable.

“Unlike other more chaotic, less supported places, where innovation becomes more critical. In SA we don’t need to push it that hard, so our economy just snoozes along.”

As an example, Dunstone points to financial security compared with 12 months ago improving each month since March, and now being consistent with fluctuations since 2014.

“Around half of South Australians feel about the same as 12 months ago, with this level 65 per cent of those over the age of 65.”

Although the economic figures point to a return to average, Dunstone said that the questions around mental health were encouraging in that respondents are feeling resilient.

“Most South Australians are feeling psychologically strong even with the stressors of 2020,” Dunstone said.

“There is stronger optimism about their mental health and wellbeing about the next 12 months, with 60 per cent sensing it will be about the same as now, and 26 per cent feeling it will be better, indicating a steady improvement each month since March,” Dunstone said.

“The Square Holes monitoring of health and wellbeing of South Australians since March has illustrated a generally high level of overall resilience, yet with some clearly struggling,” Dunstone said.

“While measures of mental health spiked in March, and stabilised April to July, the latest data for August illustrates a level of the strain of 2020, with jumps in people feeling ‘tired for no good reason’ and ‘feeling that everything was an effort.’” 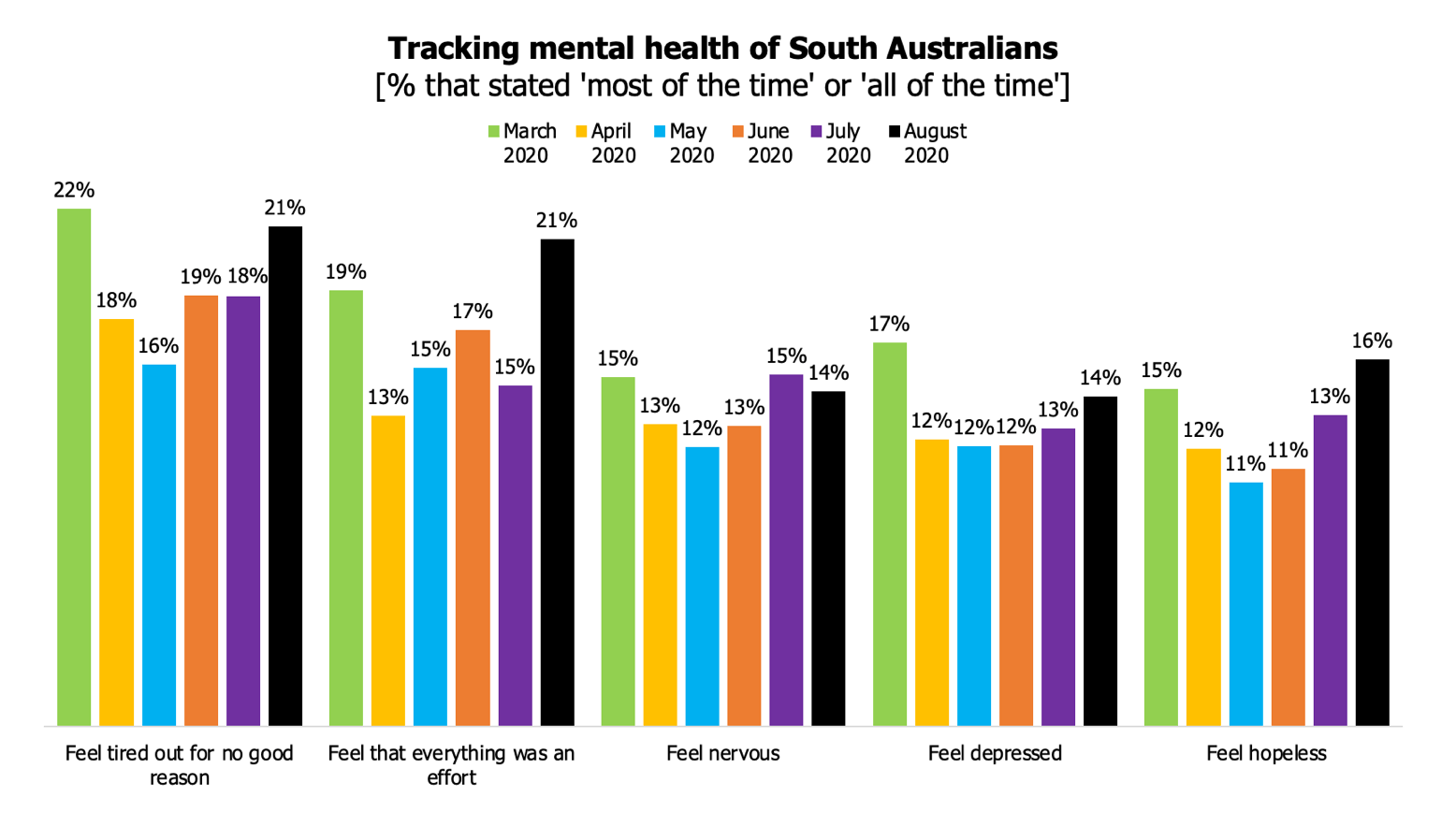 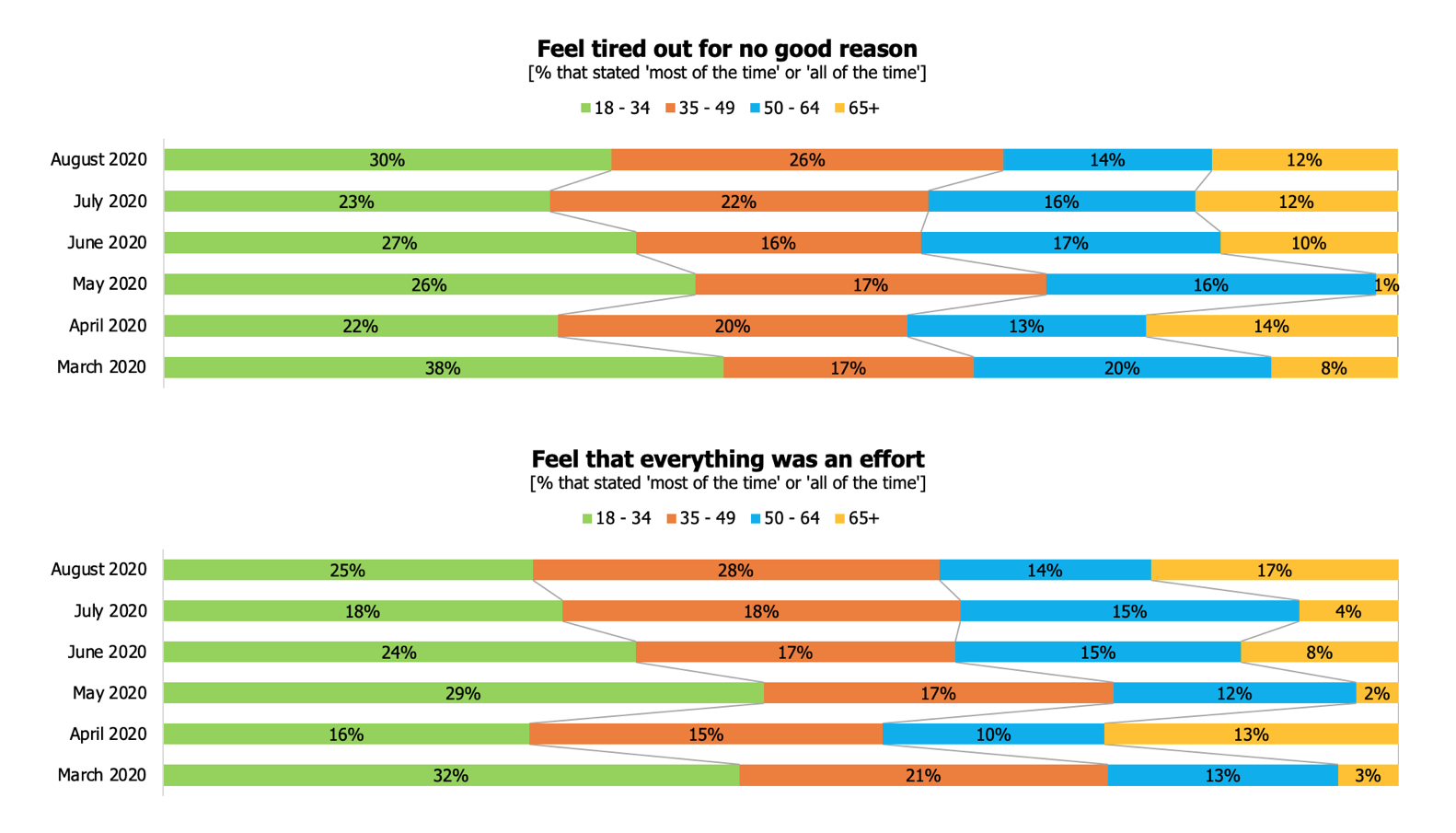 Dunstone said that Square Holes’ tracking since March has illustrated the adaptivity of South Australians to the chaos of 2020.

“An excellent real-world illustration of human adaptability theory, whereby people have an innate ability to adjust to stressful situations, through learning, finding coping mechanisms, innovating and adapting,” he said.

However, the return to normal is also a worry, with the equilibrium of complacency returning so quickly that any urgency to push economic boundaries may have been lost.

What do they say about wasting a good crisis?

This is the last of our weekly updates on the Square Holes mind and mood analysis. From October we will be doing a monthly exploration of key topics, making sense of the mind and mood of South Australians and what this means for our business and economy.