Leaders in states and countries hardest hit by the coronavirus such as Victoria and the United States received the lowest ratings while those in charge of relatively unaffected places, including South Australia, came out smelling of roses.

South Australians are pleased with their own community performance and that of Premier Steven Marshall during COVID-19 and 2020 more widely, according to the survey of 400 adults at the end of August.

The overall results indicate that South Australians perceive the poor COVID-19 containment outside of the state as a reflection of poor leadership.

Square Holes founder and managing director Jason Dunstone said this perception was generally consistent across age, although some interesting patterns emerged such as rating the performance of Premier Marshall increasing with age.

“The balance of people tend to give a fair or neutral response,” said Dunstone.

“South Australian small and larger businesses were also viewed to be generally performing okay, although a larger proportion did not know.

“South Australian not for profits, disability services and charities had a larger ‘don’t know’ response, which may indicate an opportunity for such organisations to communicate to the general population of the challenging environment and the need for donations.” 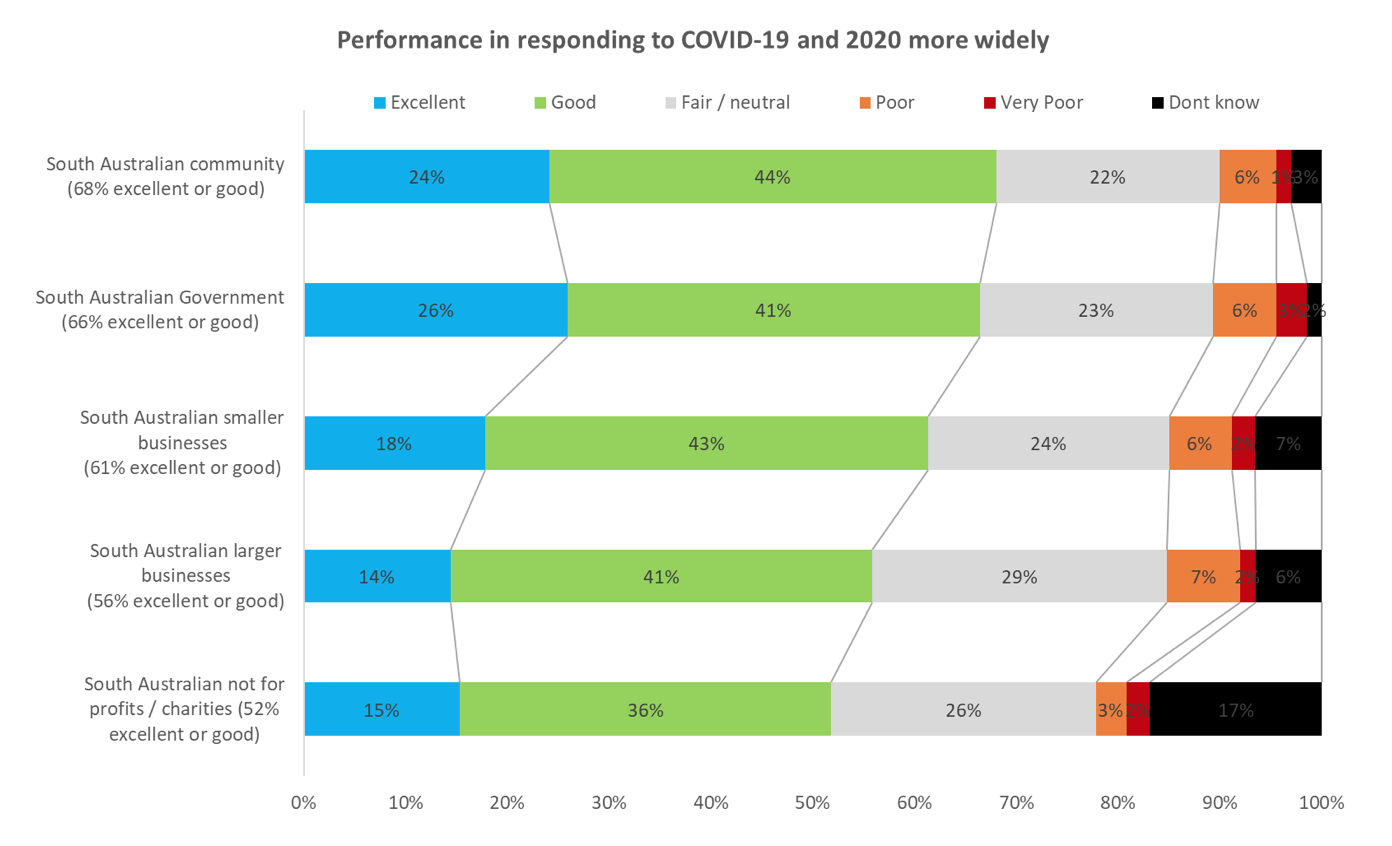 Dunstone said patterns were generally consistent across age groups, although South Australian businesses were perceived to be performing better among 35 to 49 year olds, and weaker amongst those over the age of 65.

“This is largely from a stronger don’t know response,” Dunstone said.

“Older South Australians are more likely to rate the performance of the local community as excellent or good, and 18 to 34 year olds gave lower ratings for the SA Government.”

Premier Steven Marshall is viewed to have performed well during COVID-19 2020, with the clear majority (64 per cent) giving a rating of excellent or good.

“This is well above other Australian state and territory leaders and a selection of overseas leaders,” Dunstone said.

At the other end of the performance scale, only 30 per cent of South Australian respondents rated Victorian Premier Daniel Andrews as performing excellent or good, and a similar proportion gave National Opposition Leader Anthony Albanese an excellent or good rating.

All Australian leaders were perceived by South Australians as stronger than the three overseas leaders measured by the survey.

“One interesting stat was that while 53 per cent of South Australian respondents gave Trump a poor, one in five say he is excellent or good,” Dunstone said. 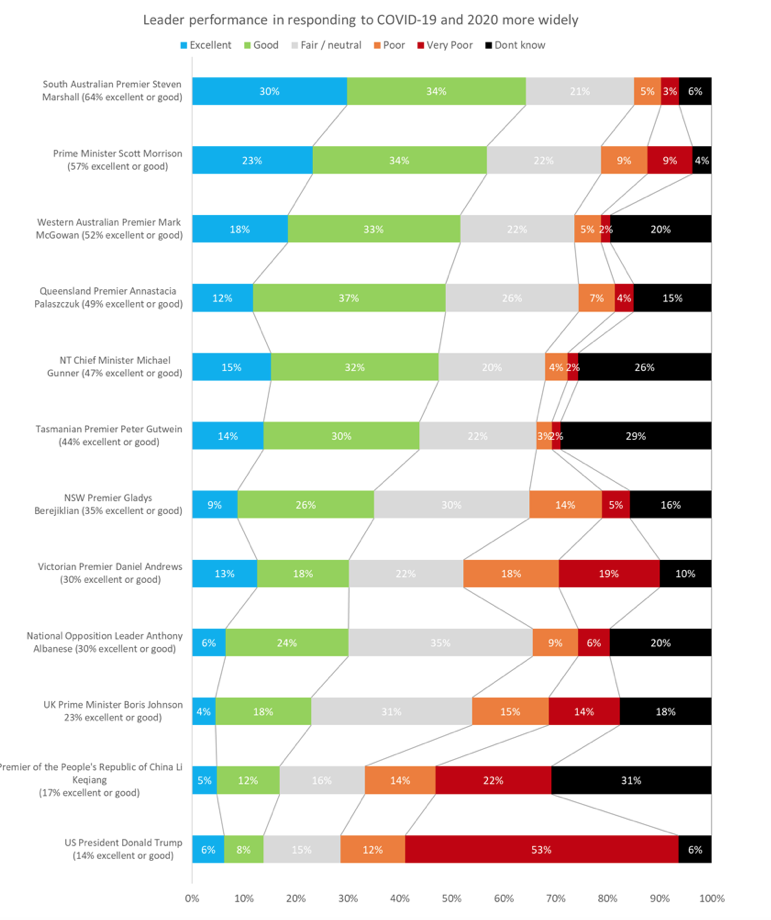 Dunstone said approval of the performance of Premier Steven Marshall increased with age.

“The 18 to 34 year olds provided lower ratings for other Australian state premiers other than Victoria’s Daniel Andrews, where South Australians aged over 50 provide lower levels of excellent and good ratings.” 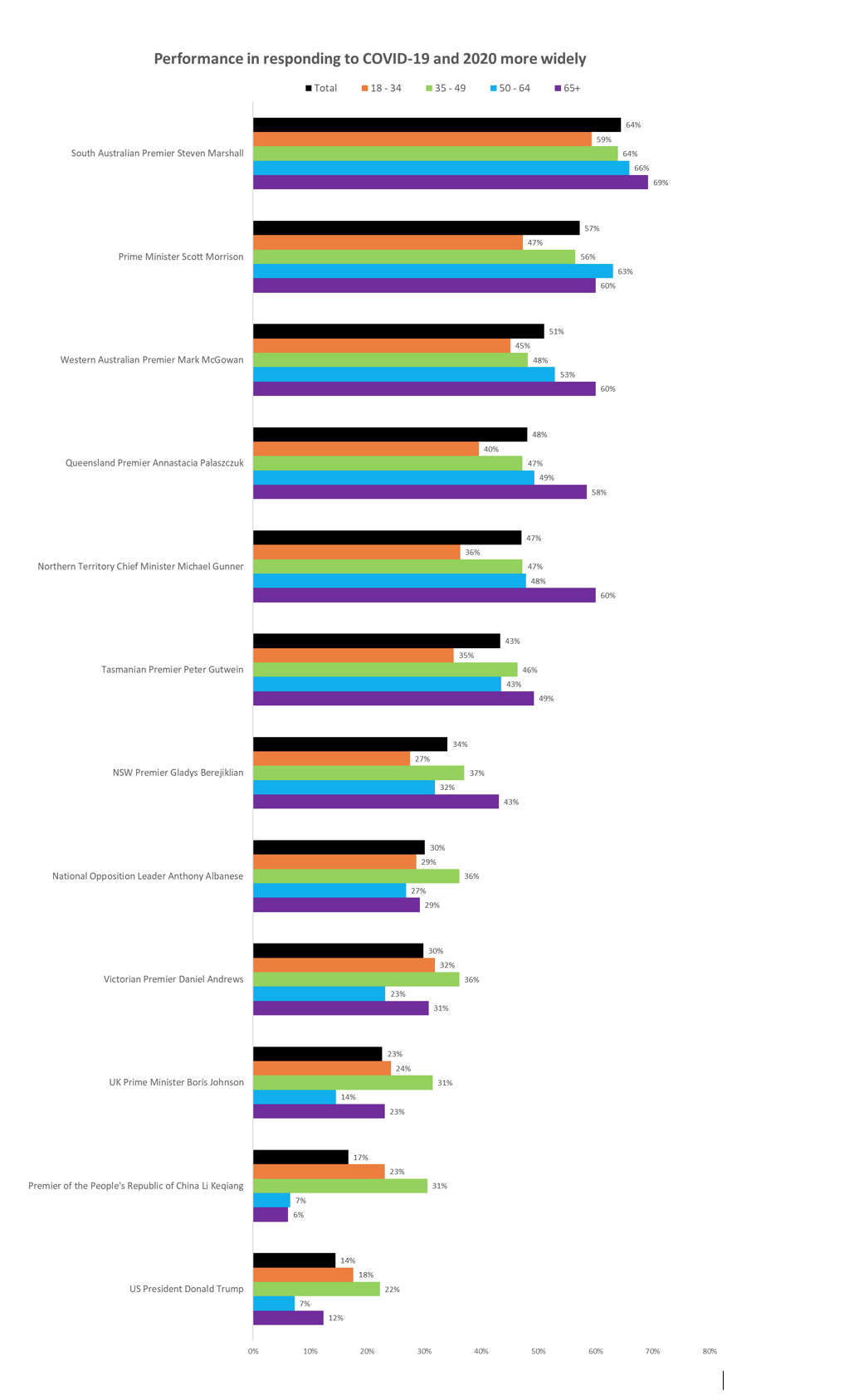 “Global research generally indicates historically that in times of economic and other instability, confidence in leaders grows,” Dunstone said.

“This does not always to translate into election victory, yet it does illustrate a general level of trust that our political leaders will deliver when we need it most.”

Participants in the Square Holes’ COVID-19 focus groups were generally accepting of how the state has handled the crisis.

“I think South Australia as a state is doing really well… I think that they have tried to facilitate people’s needs as much as possible as far as financially. There are going to be people who win, when they shouldn’t be… I don’t blame the government because I think they’ve had to have knee-jerk reactions to a situation that is quite critical and dire. It’s just what has to be done. There are people who are going to lose out, and that’s just the situation we’re in,” one group member said.

“I work for a big organisation in hospitality and a small non-profit. Everyone has done their best in this time of uncertainty. I was happy to see that some cafes have put out food for people in need and some organisations have stepped up to help people who are homeless. We are in this together as a community. People are working together, even by keeping social distance and looking after each other,” said another.

Dunstone said there was supporting evidence from Square Holes’ research and other data that showed South Australians felt they had collectively performed well during COVID-19 and 2020, particularly in a world of economic and wider chaos.

“This has provided a most valuable confidence boost from how adaptable we are,” Dunstone said.

“As reported previously in the mind and mood summaries, pride of South Australians appears to be on the rise from how we have dealt with the challenge.

“This will hopefully have positive ramifications for the economy moving forward, as we harness the psychological safety of South Australia.

“Perhaps our positive mental state from being in a state geographically isolated from a struggling world will trigger a positive economic future.”

Square Holes has been conducting monthly surveys since April to judge the mind and mood of South Australians during the COVID-19 pandemic.