According to Square Holes’ August Mind and Mood survey of 400 South Australians, young South Australians (18-34 year olds) are making the biggest contribution to keeping our arts sector alive in a challenging environment, with strong online and offline support since April across art forms.

“South Australians aged above 50 recorded lower levels of arts participation since April, particularly those over the age of 65, with only a small proportion participating online or offline.”

Dunstone said that, as would be expected given the social distancing norm of 2020, online has presented a platform for enjoying the arts, with many willing to pay for online arts performances.

“This is again particularly the case for younger South Australians,” Dunstone said.

“For example, 24 per cent of 18 to 34 year olds noted they had experienced South Australian based music via paid online.”

According to the survey results, going to indoor venues to experience arts was less common than online, other than for cinema and film, with 13 per cent of respondents going to a cinema since April.

“Generally anyone over 50 indicated lower levels of arts engagement since April,” Dunstone said. 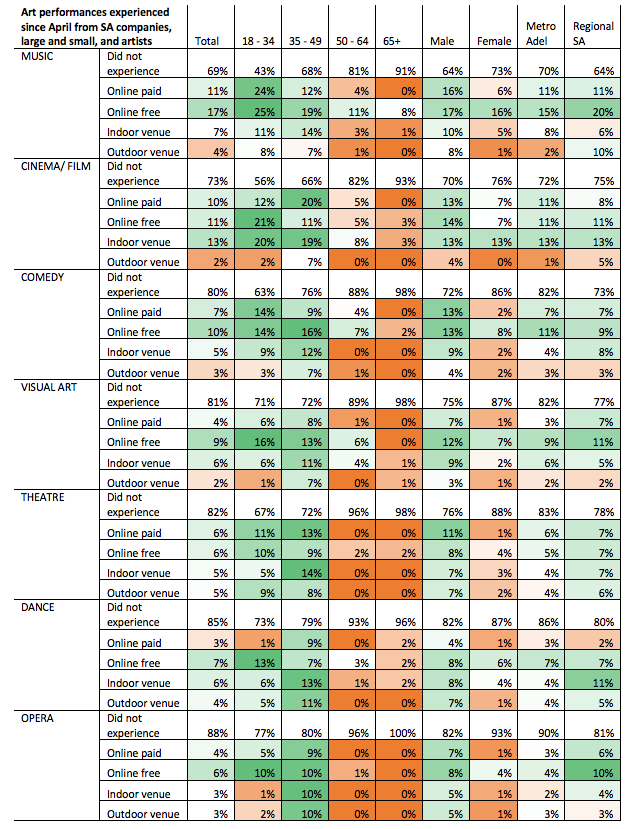 When asked to name good examples of ‘innovation in the arts’ during 2020, 12 per cent of respondents were able to do so.

“There was a wide array of suggestions made from larger endeavours to individual artists,” Dunstone said.

When asked “why do the arts matter for South Australia?” 36 per cent were able to provide a reason, Dunstone said.

As one research participant noted: “I feel it brings a lot of money into our economy and creates a good vibe around the city.”

Culture (19 per cent) and lifestyle (13 per cent) were also prominent benefits of the arts, according to respondents.

“An enriching role in growing understanding and empathy and bringing our community together,” one respondent said.

“It is a framework for society and reflects the times and conditions.  It is important for entertainment, jobs, values, information, reflection, education, and any other number of aspects,” was another response.

“Because it gives people something to do besides sport,” concluded a respondent.

Respondents listed other contributions of the arts, such as maintaining South Australia’s reputation as the art/festival state (13 per cent), mental health benefits and stimulating wider creative thinking (7 per cent), and supporting local artists (7 per cent).

“This has certainly been a challenging year for South Australia’s arts sectors,” Dunstone said.

“Findings such as these and other statistics collected by Square Holes and other organisations such as ‘I lost my gig’ illustrate huge income slides for many arts businesses and individuals in this critical sector.

“It is likely the coming years will continue to be challenging for South Australia.”

Dunstone said that while many people, particularly younger people, are keen to head to a show and buy tickets online and offline there appears to be a high level of apathy amongst South Australians.

“Many people have become comfortable just staying home and watching Netflix, Stan or whatever, rather than supporting our invaluable arts sector,” Dunstone said.

“This will be the time for clever thinking from our government, arts sector, arts companies and individual artists.

“A time for supporting the arts and selling the lifestyle benefits and critical role the arts play to our economy and jobs.”