Kangaroo Island Plantation Timbers this month completed its first replanting in more than a decade.

The 24-hectare planting of 25,000 pine and blue gum seedlings was planned ahead of the devastating bushfires that ravaged the island. The site in the Bark Hut Road precinct was harvested a decade ago by a previous owner and becomes the first blue gum planting east of the central KI town of Parndana.

The publicly-listed company says the planting is a sign of its commitment to the island.

KIPT has so far received more than $55 million in insurance payouts following the December and January fires that damaged 95 per cent of its crop, which is predominantly on the western half of the island.

It is still negotiating for further payouts worth more than $15 million.

The company is also still waiting on a final decision from the state government about its proposal to build a port at Smith Bay on the Island’s north coast to ship the timber to offshore markets.

The final documentation for the $40 million jetty and handling facility – the Kangaroo Island Seaport  – was put to the state government in March and a further response document lodged in June.

KIPT managing director Keith Lamb said there was 4.5 million tonnes of fire-affected timber that could still be salvaged and sold but only if it could begin developing the port soon.

He said the new plantation was the first on the island in more than 10 years and had served as a trial for new fencing and site-species matching.

“It’s a small but symbolic step for us which sends a clear signal to our shareholders and the Kangaroo Island community that we are here for the long term, and planning for the future,” Lamb said.

“It also helps us to trial some of our systems in preparation for the major replanting after harvesting the current fire-damaged crop.”

The Kangaroo Island fires began on December 20 and burnt 210,000ha – almost half of the island – across a 612 km perimeter before being declared contained on January 21.

The fires have started the clock ticking for the removal of saleable timber. 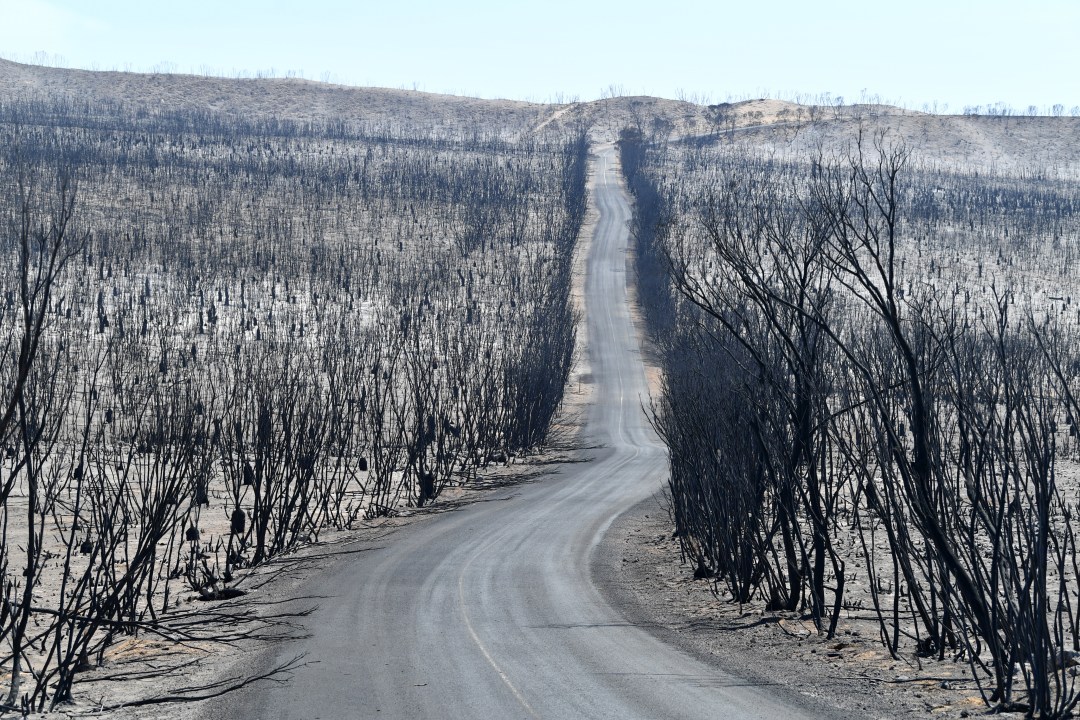 Lamb told ABC Radio this morning the burnt softwood pine trees had a window of about two years before they rotted while the hardwood blue gums could potentially last up to five years.

“We believe we can do this but we don’t have time to wait for a protracted decision … if the logs don’t get off the next best option is to start chaining and burning,” he said.

“As a consequence of the fires, those trees need to come off, we don’t have the luxury of time that we had before the fires … and it’s not just us, there are another dozen growers on the island who are in the same position.”

The main opposition to the Smith Bay wharf about 20km northwest of Kingscote has come from neighbouring abalone farm Yumbah Aquaculture and environmental groups.

Yumbah Aquaculture has been in Smith Bay for more than 20 years and grows green lip abalone predominantly for export.

Earlier this year, the aquaculture company flagged a multi-million-dollar expansion of its own at Smith Bay but only if the KIPT port project does not go ahead.

Yumbah general manager David Connell told ABC Radio this morning the planned sea port next door would “100 per cent” kill the aquaculture business, a statement which was refuted by Lamb.

“The reason why this is taking so long is purely and simply because it is in the wrong location,” Connell said.

Eco-Action Kangaroo Island’s John Hodgson said there were other port sites available on the island and the KIPT development would ruin Smith Bay’s potential as a tourist site.

“Smith Bay is a very beautiful place and the idea of having 80,000 tonnes of woodchips stored there plus a port really doesn’t fit with the potential for tourism development on the north coast of the island,” he told ABC Radio.

KIPT’s share price was $0.88 this morning, which is roughly where it has hovered in the past four months.

However, its value has more than halved since the fires started with its shares closing at $2.35 on December 20.