The demerger will return the ZEN Energy retail business to its founding shareholders, which includes respected Australian economist Professor Ross Garnaut and prominent SA businessman Raymond Spencer, who are also the owners of Sunshot Energy.

The new board quickly announced a plan to establish 1GW of additional dispatchable renewable generation assets to ultimately deliver cheaper power to the struggling Whyalla steelworks that Gupta purchased in early 2017.

ZEN Energy retains the energy hardware solutions and retail energy businesses from the previous entity. Sunshot Energy specialises in the development and wholesale trade of renewable energy, with interests in all mainland states of Australia.

The value of the deal is being kept confidential.

However, it also unveiled more details about its $1 billion Whyalla expansion including the installation of an electric arc furnace, a direct reduced iron facility and a new state-of-the-art rolling mill by 2024.

It has promised no job losses at the Whyalla plant, which has about 1200 permanent staff and a few hundred contractors.

Efficiency problems still exist in Whyalla with the company also this month launching a three-month review to identify and implement major cost reductions to its legacy primary steel making facilities, which it concedes remain “financially challenged”.

ZEN Energy, initially formed in 2004 and merged with SIMEC in 2017, will now be led by Garnaut and Spencer as Directors and Geoff Titus as CEO.

Melbourne-based Sunshot Energy was registered in 2019. It purchases long-term, financeable offtakes from wind and solar farms, turning them into firm contracts with a mix of physical plant, such as storage and financial technologies including hedges and insurances, and sell the resulting electricity and environmental products to wholesale customers.

Garnaut said the availability of highly competitive wholesale electricity from Sunshot Energy will enable ZEN Energy to accelerate its efforts to increase competition in the energy market and lower costs through use of renewable energy.

He said the renewable energy retail and technology strengths of ZEN and the development wholesale market capacities of Sunshot was a natural partnership,

“Under the leadership of Sanjeev Gupta over the last two and a half years, the team at ZEN Energy has constantly developed the strength of this business.

We look forward to continuing to contribute to lowering the cost and improving the security and stability of Australia’s power supply.”

“We look forward to partnering with new utility-scale renewable energy projects across the country to enable us to supply 100% renewable energy at low cost and high reliability to our growing customer base,” Garnaut said. 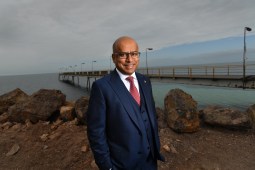 Gupta said he was confident both SIMEC Energy Australia and ZEN Energy would have a bright future beyond the demerger.

“ZEN Energy was one of my first investments here in Australia in 2017 when we acquired a majority shareholding,” he said.

“I would like to especially thank Professor Ross Garnaut for his leadership and expertise over the last four years.

“Ross’ deep understanding of the evolving renewable energy space was pivotal in the development of our $1 billion renewable energy program. I wish Ross and the entire ZEN Energy team all the best for the next stage of their business journey.”