According to Australian Bureau of Statistics, the South Australian café, restaurant and takeaway sector generates around $200 million in revenue each month, and after plummeting in March from COVID-19, we are now seeing recovery.

Square Holes founder Jason Dunstone said this recovery was also reflected in the survey of 400 South Australian adults by Square Holes at the end of June and beginning of July.

According to the results, three-quarters of South Australians have ordered takeaway at least once or twice since May, with this level as high as 92 per cent for 18-24 year olds and only dropping to 65 per cent for those over the age of 65.

“Dining in has been at a lower rate, yet is still around 60 per cent or more across age groups,” Dunstone said. 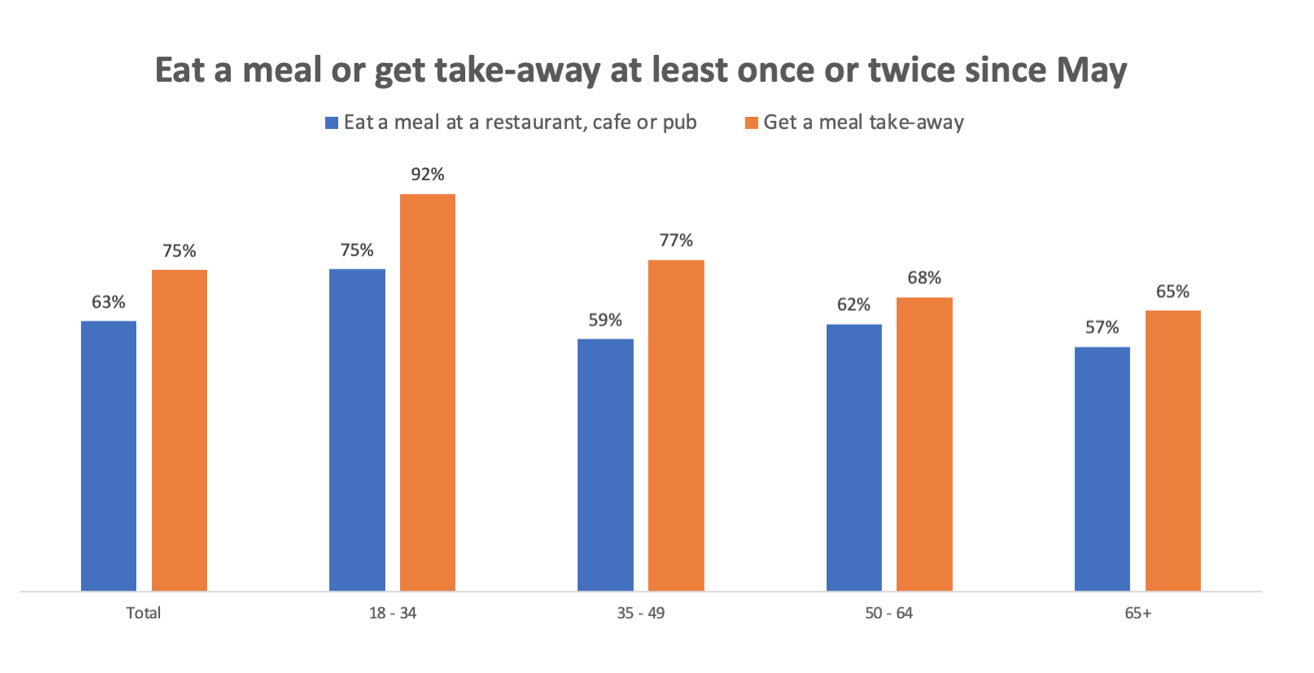 Seven in 10 younger people aged 18-34, have been spending locally on takeaway food at least fortnightly and 46 per cent eating out at a restaurant, café or pub.

“Other South Australians are also patriotically eating their way to an economic recovery,” Dunstone said.

“Males have been eating out more than females, and metropolitan Adelaide more than regional South Australians.”

When asked which cuisines they had purchased for dining in at a restaurant, café or pub over the past few months, respondents had bought, on average, 2.6 food types, with this being 3.4 for 18-34 year olds and 2.2 for over 65 year olds.

“The most popular cuisine across age groups was nominated as Australian (37%), followed by café (22%) then fish and chips (20%),” Dunstone said.

“South Australians aged over 65 were particularly strong in their preference towards Australian.” 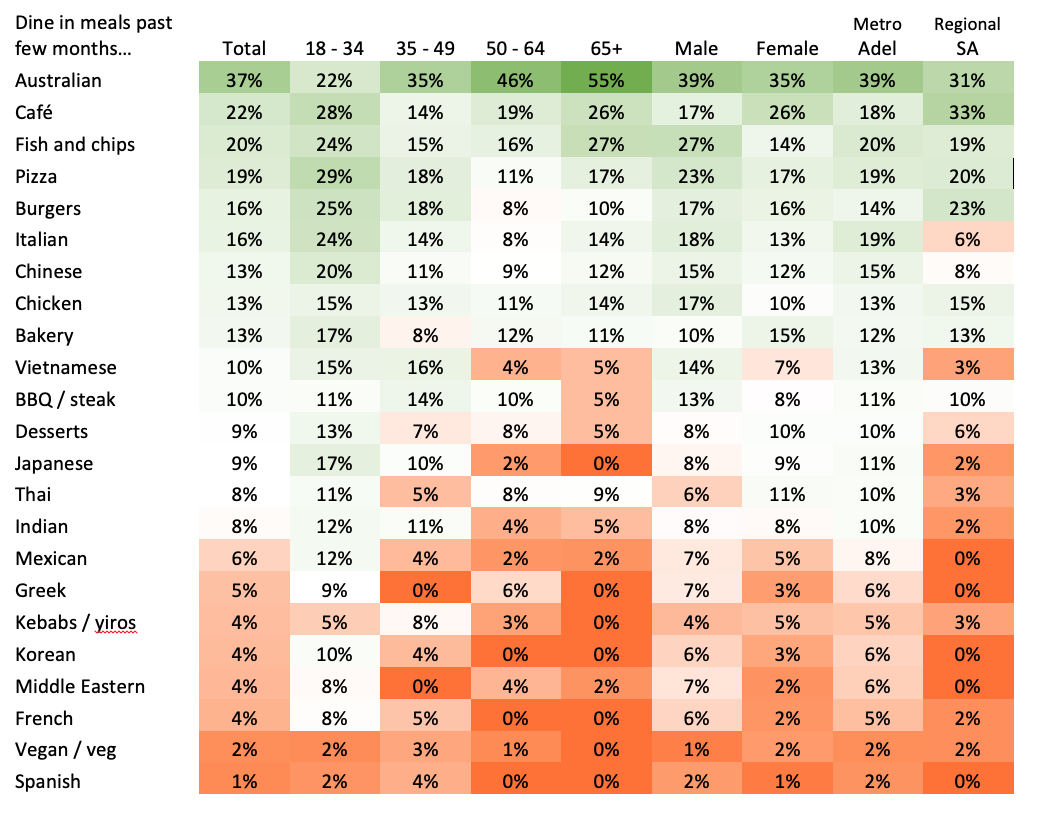 The average across age groups was 3.4, yet the patterns of favourite types of takeaway food remained consistent.

“There are also age differences by types of food,” Dunstone said.

“For example, 18-34 year olds more often purchase burgers, Indian, café, kababs/yiros, Italian and vegan/vegetarian to other age groups, while South Australians aged over 65 had a preference skew towards fish and chips and Australian.”

The survey also found that men prefer burgers and women like fish and chips and Chinese.

“In saying this, pizza is the favourite takeaway across all age groups, males and females and in metropolitan Adelaide and regional South Australia,” Dunstone said.

“We love our pizza!” 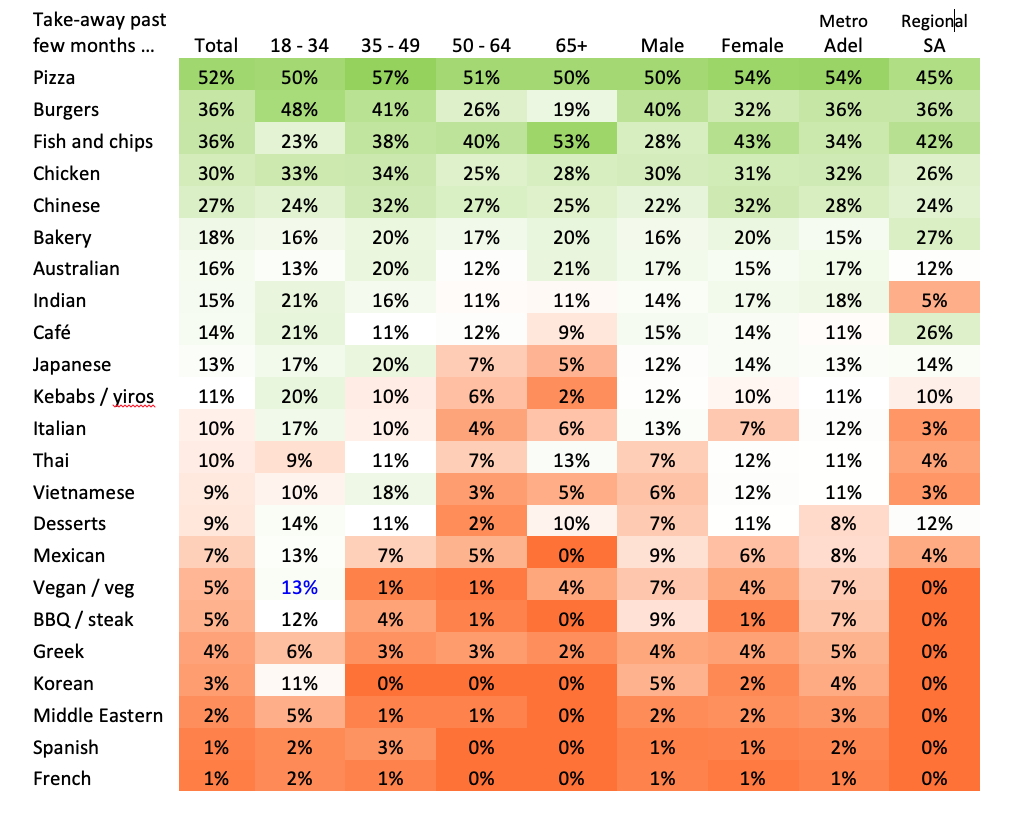 However, when asked where they most often purchase their takeaway, close to four in 10 of the respondents named large global brands, with KFC and Dominos the king and queen of the take-away scene (14 per cent KFC and 10 per cent Dominos), followed by McDonald’s (6 per cent), Hungry Jacks (4 per cent) and Subway (3 per cent). 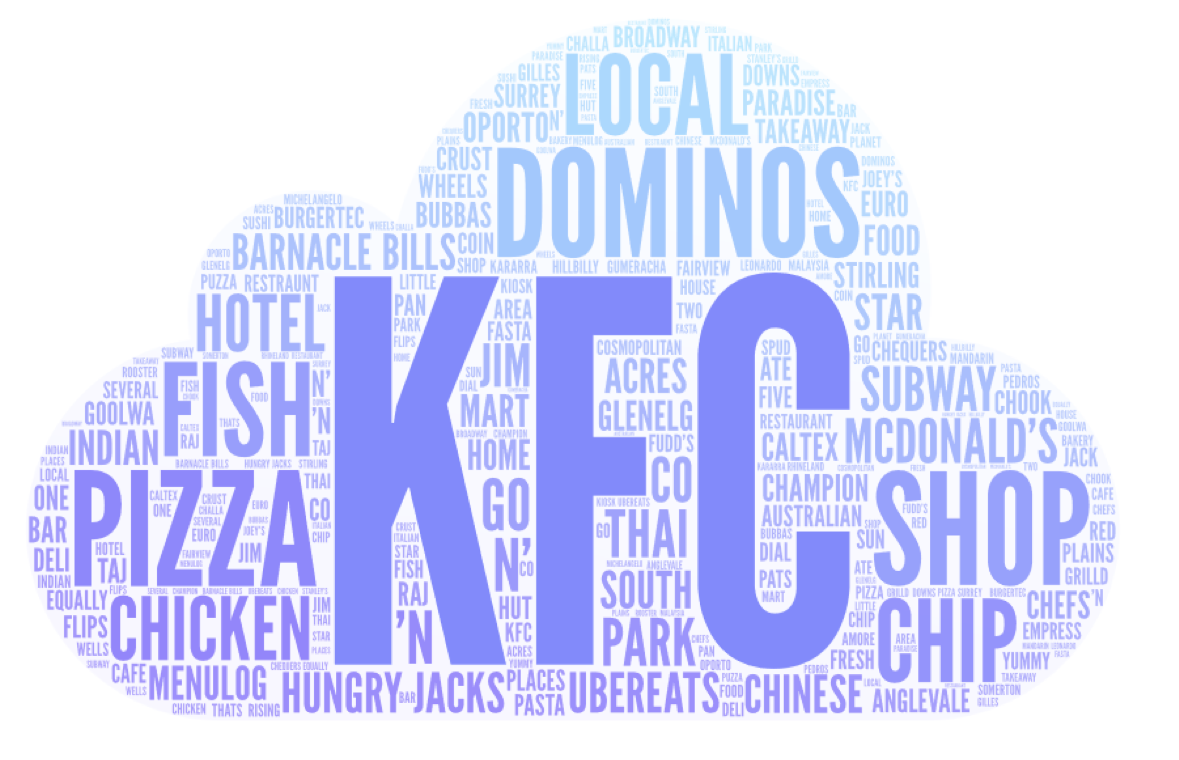 “As in our earlier mind and mood post about supporting local, often the most loved take-away brands of South Australians are actually the fast food brand goliaths, who invest heavily in building their brands through advertising and other marketing,” Dunstone said.

“This emphasises the importance of even small local food businesses to be strategic and invest in keeping their brands top of mind for hungry South Australians.

“Business revenue will typically grow as their brand reputations grow.” 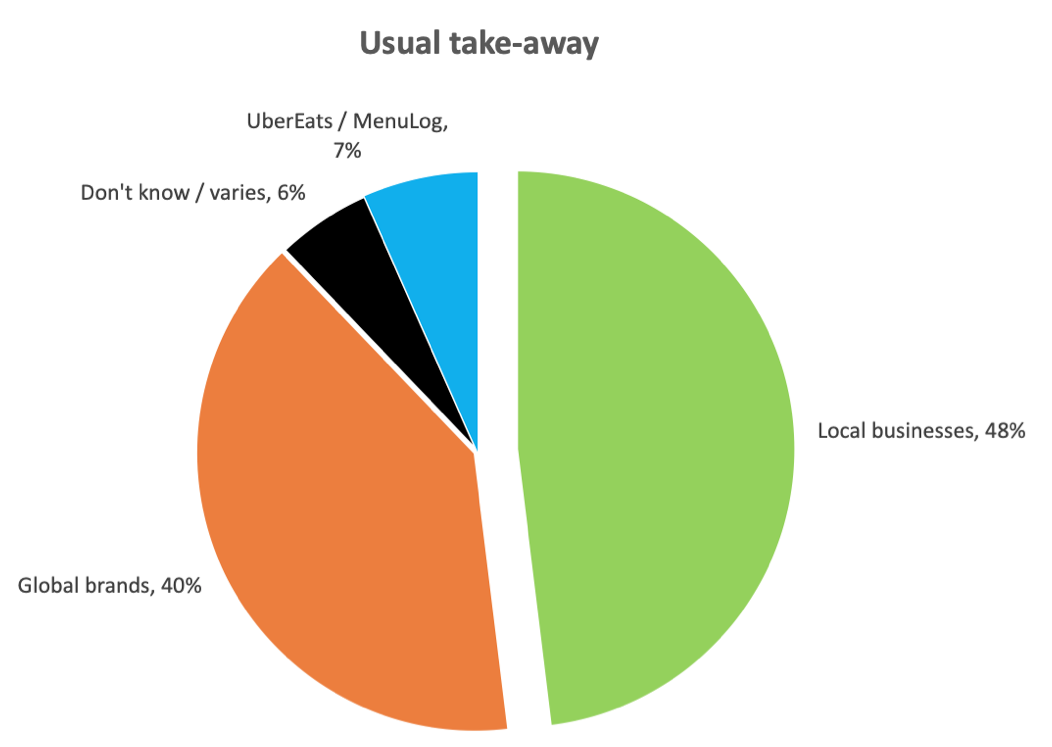 The survey found that when asked where respondents order from the most, UberEats and MenuLog were also prominent brands, yet the majority usually pick up their orders direct from the store.

“Younger South Australians are more inclined to have their takeaway delivered by the store or UberEats, although the majority across all age groups usually pick up their food,” Dunstone said.

“Regional South Australians are also more likely to pick up from the store than people living in metropolitan areas.”

For the 27 per cent who purchase takeaway at least weekly, on average they usually spend $54, with the amount being around $60 for people aged under 50 and around $40 for older age groups.

“South Australians are hungry to help rebound the local economy and playing their part to spend on takeaway and dinning in,” Dunstone said.

“It is interesting to note the consistencies irrespective of age and where different segments differ in needs, wants and behaviours.

“How our local businesses think strategically and build their own brand reputations, with heavy competition and preference towards the global fast food giants, will be critical to their own prosperity and that of the wider local economy.”