General spending by South Australians is anticipated to decline over the six months, yet there are positive signs, based on Square Holes latest Mind & Mood survey at the end of June.

“With a declining sense of financial security from themselves and the wider economy, as explored in last week’s InDaily Mind and Mood summary, spending is tightening,” Square Holes founder Jason Dunstone said.

“South Australians aged under 50 are more likely to expect their spending to increase in some areas, and those over 50 are switching travel plans from overseas to South Australia.”

The monthly survey found that one in three South Australians anticipate their grocery shopping to be more over the next six months, and 8 per cent less, with a net growth of 25 per cent. Other general shopping is anticipated to have those spending more, balanced by those spending less.

“Spending on travel, larger items such as cars and home renovations, technology, clothing and fashion and donations to charities are all expected to have a net decline in overall spending in the next six months,” Dunstone said.

Grocery and food shopping was the only area of spending consistently expected to increase across age groups, with particularly strong increases for 35-49 year olds (40 per cent expected to spend more, and only 3 per cent less).

In contrast, travel, charity donations and large items such as cars and renovations were expected to see net lower levels of spending over in the next 6 months compared with the last six months.

He said that 30 per cent of respondents over the age 50 said they would be spending less on donations, with only 5 per cent saying they’d spend more.

“This is a likely concerning warning sign for a sector typically receiving a large proportion of donations from South Australians aged over 50,” Dunstone said.

“A sense of loss of financial security is meaning many South Australians are cautious about their spending.”

A strong decline in spending was anticipated for larger items such as cars and renovations, with only a small proportion anticipating spending more and a large proportion planning to spend less than the last six months. 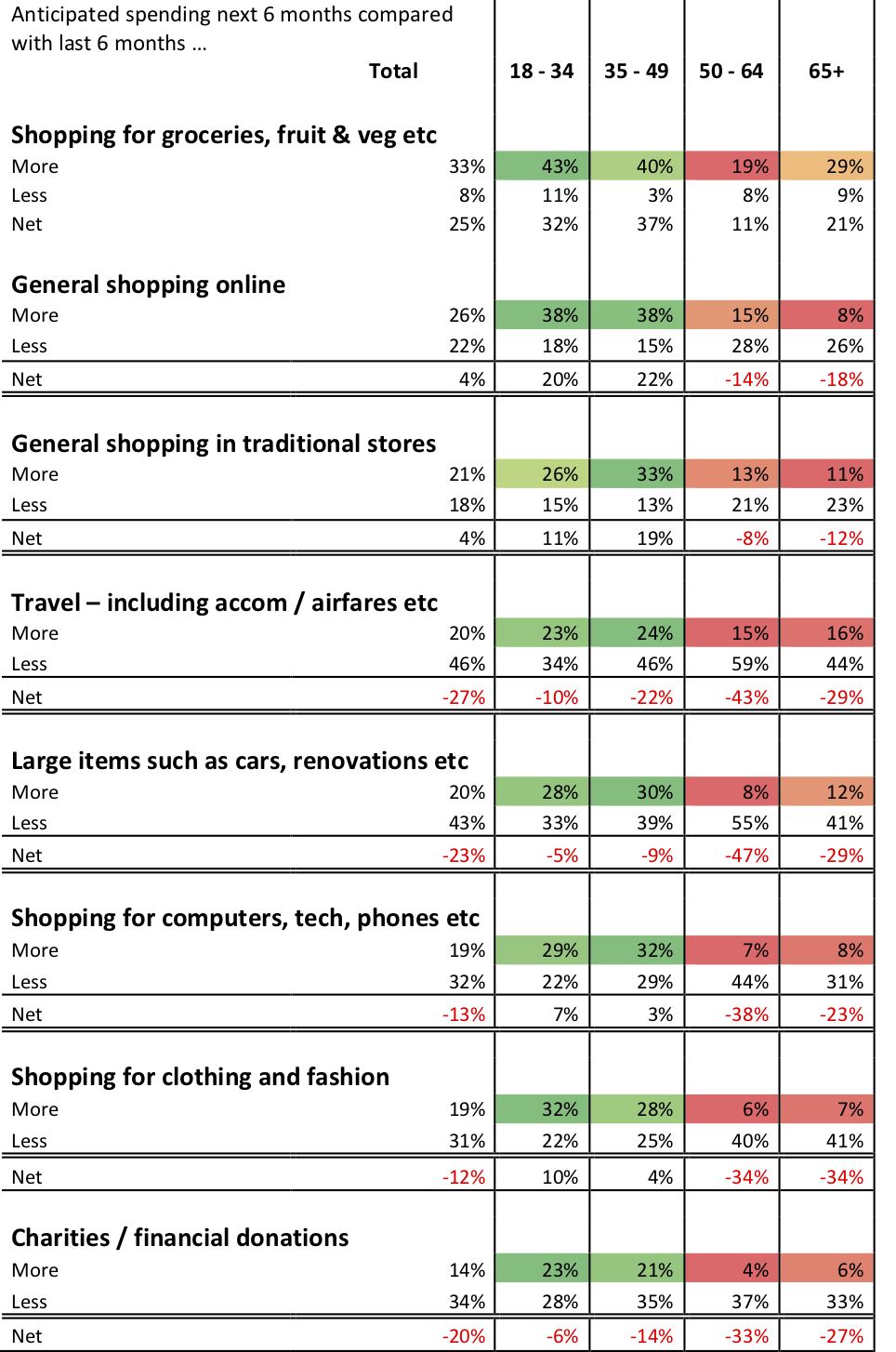 “It is interesting to note, however, that while South Australians are anticipating an overall decline in travel spending, but there is a plan to swap overseas travel for local,” Dunstone said.

The largest appetite for travel in South Australia is from 50-64 year olds (48 per cent plan in next six months), followed by over 65 year olds (37 per cent).

“South Australians aged 18 to 49 are more likely to intend to be in the market for a new car,” said Dunstone.

“Overseas travel, home renovations and real estate are not so popular at this moment in time.”

“New car plans increased and home renovations and real estate have been low in both surveys,” Dunstone said.

Dunstone said, while expected, the declining sense of financial security provided caution for businesses hoping for a quick economic recovery.

“Likely the rewards will come from businesses driving revenue through understanding their customers and potential customers and thinking laterally,” Dunstone said.

“Who are the customers most likely to shop with us, and how can we attract more of them?”