Like hundreds of other businesses, Prohibition Liquor was forced to reassess the way it operated when the coronavirus struck South Australia in March and the state’s hospitality industry was forced to a standstill.

Prohibition Liquor co-founders Wes Heddles and Adam Carpenter started the gin business in 2015 in memory of Heddles step-mum, Mary, who passed away from a rare form of cancer. Gin was her favourite drink.

In the years since, the spirit company has gained a strong following and won a stack of awards, including at the 2019 San Francisco World Spirits Competition and 2019 Australian Distilled Spirits Awards.

Throughout this time the owners have maintained the ability to find opportunity in tragedy and, when Prohibition Liquor was faced with the closure of its Gilbert Street bar, Heddles and Carpenter, once again, became resourceful.

The pair began making hand sanitiser and, seeing a boom in online sales, decided to change their online presence.

What were your biggest challenges when you were forced to be closed?

I guess immediately having to close the doors with a staff-base that was purely sales and customer experience-focused and then having to diversify their roles and ensuring we kept as many people as possible. So, getting them to do packing and bottling shifts – because online sales were increasing, basically equal to our turnover through the bar.

But the challenge with selling a cocktail versus a full bottle is that the profit and the bottom line is very different.

The other challenge we had was we had a subtenant – Tell Henry – who leased a small space for their café. They were up for a lease renewal in August and decided it was in their best interest to ask for an early release of their lease, so we let them go. And in doing so, we still got the great opportunity to do coffee on Gilbert Street.

It’s part of the reason why we had Tell Henry in the venue to start with. If you drive past Gilbert Street at 7 o’clock in the morning there are people in the tasting room!

We felt that offering was really important. So we opened Bootleg café and we were able to employ new employees as well as redeploy some of our employees to the café. We were also able to ensure that we kept people employed, because that’s critical at the moment.

You’ve previously mentioned you guys had an increase in online sales during the pandemic. How much did you grow by and to what degree has that tapered off?

The online sales would have grown by about six hundred per cent – it was huge.

It has tapered backwards but it’s still stronger than it was. It’s probably double pre-Covid-19. And while it’s still relevant to South Australia, I guess it’s more so our east coast deliveries that are holding strong, particularly in Victoria.

And I think that’s because of the convenience of having something delivered for the same price that it’d cost you to go to Dan Murphy’s.

I think in South Australia we’ve seen bottle shop sales increase and certainly more people visiting the distillery directly, but I think the convenience of having the online offering has certainly changed the Australian consumer purchasing pattern.

I also think the online purchasing is going to continue. We’ve had enough time for the habitual purchasing patterns to change, not only for alcohol, but for many things – and that’s accelerated our need to get our online system up and running effectively.

So, we’ve done some tweaks to the website and we’re going to be launching it shortly. It’s going to become a bigger and more relevant part of our business moving forward.

We want to ensure we future-proof the company and that the customer experience is emulated online as if you’ve come into the distillery in person.

It’s important our online platform represents who we are. At the moment, I’m not happy with where it’s sitting.

We want to be able to offer masterclasses online. We’ve launched a 100ml three-pack of gin and you can then create your own masterclass at home. So, you can open your three-pack and sit down with Adam and I in your lounge room and enjoy an online experience.

It’s one way where we want to be able to make them to a point where we can do online scheduled events.

We had some really great success doing some stuff on world gin day in doing a live class into Singapore and a virtual tour with a Japanese connection and I guess that opportunity to connect with people we otherwise can’t get to at the moment is really important.

And I guess technology and the internet gives us that access and ability and I guess it’s how we leverage that to make it make sense for us and our customers.

During the pandemic, you guys were quick to move into hand sanitiser. How did that come about?

It was more out of demand for our own team and keeping our team safe that we thought we needed to create hand sanitiser.

We went, ‘we’ve got alcohol on site, we could make it.’ The only risk for us was having an excess – so for every pure litre of alcohol you’re basically paying $89 to the government.

So, I phoned the ATO and asked if they were able to produce a concessionary spirit, which means that we can produce it without having to pay the excise for hand sanitiser. And, to my surprise, they responded within 24 hours with a positive yes. Normally when you speak to the ATO you work within their time frame and it can be up to 30 days, and for them to respond within 24 hours is phenomenal.

Then the only other hurdle was that sanitiser is controlled by the TGA (Therapeutic Goods Administration). They basically said, ‘if we’re not making a claim to what it can do then we’re free to do it.’ And they deregulated sanitiser until the end of June.

So up until June 30 we were able to give away sanitiser, which was huge for us.

And it meant that during the peak of Covid-19 in South Australia and interstate, people were able to place an order for a bottle of gin and get a 100ml hand sanitiser. It worked really well.

We absorbed the shipping costs and the customer had a gift with purchase as well, so it made double sense to buy from us.

You were named as one of InDaily’s 40 Under 40 winners last year. Has anything changed as a result of the award?

For me, what I love about what 40 Under 40 is the state-wide cross-industry collaboration and the network of people that we’ve been able to meet and talk with and bounce off is what make South Australia special. 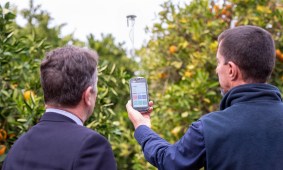 I guess it’s that ability to have fellow champion leaders across the state, who I otherwise wouldn’t have probably been introduced to or have met.

The interview has been edited for clarity and brevity.

Nominations are still open for this year’s 40 Under 40 Awards with judging to commence in August before the awards are held in October.