As explored in the mind and mood story in mid-June, state pride is on the rise as SA emerges from COVID, with particularly strong performance for lifestyle aspects.

Yet, South Australia is perceived as continuing to struggle economically.

The survey found that respondents aged 18-34 rated the performance of the economy stronger than other age groups, but even then they thought it was weak.

“Only 38 per cent of 18 to 34 year olds gave a rating of good or excellent and only 13 per cent of South Australians aged over 65,” Dunstone said.

Dunstone said there was a general ambivalence about the economy, with the majority of respondents giving it a fair rating.

“Only a small proportion of South Australians rate 20 aspects of the economy as poor or very poor, with a reasonable proportion feeling like they did not know enough to comment,” Dunstone said. 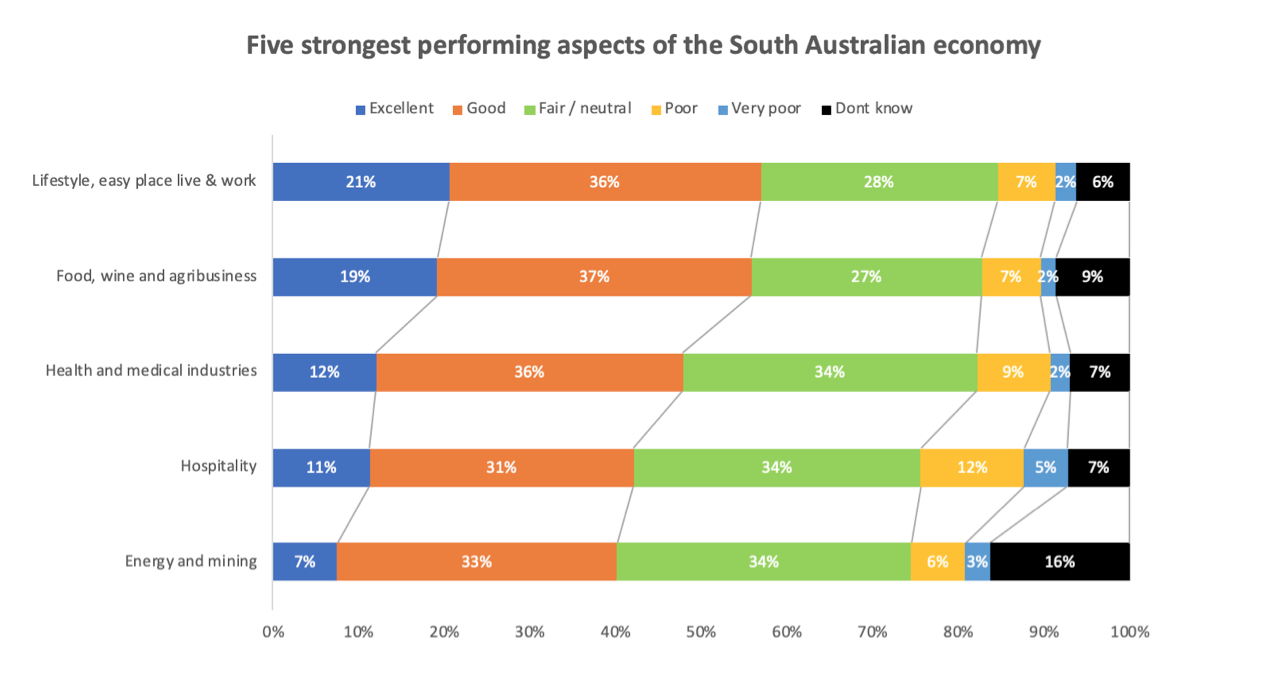 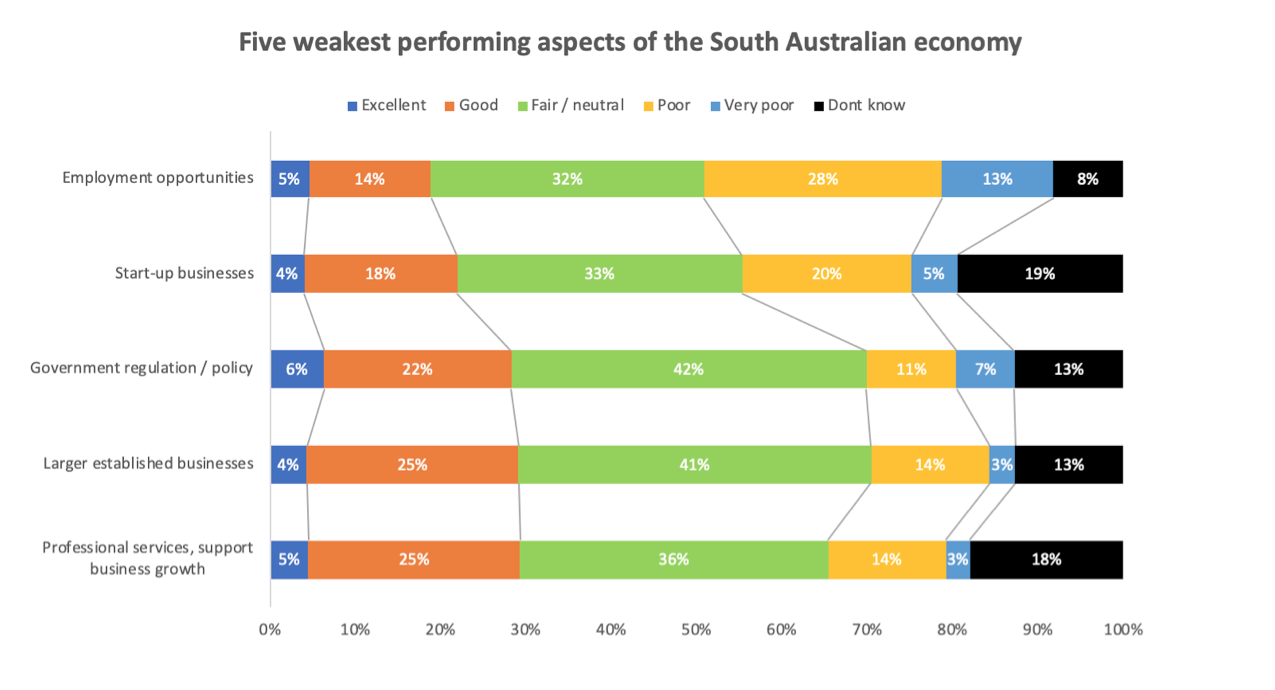 Dunstone said there were notable differences by age.

“Younger South Australians aged 18 to 34 rate the lifestyle of South Australia lower than older age groups, and perceive the performance of our education sector and professional services stronger,” he said.

“South Australians aged above 50 tend to provide lower ratings to aspects of the local economy, yet rate the lifestyle above other age groups and provide well above average ratings for our space industry.” 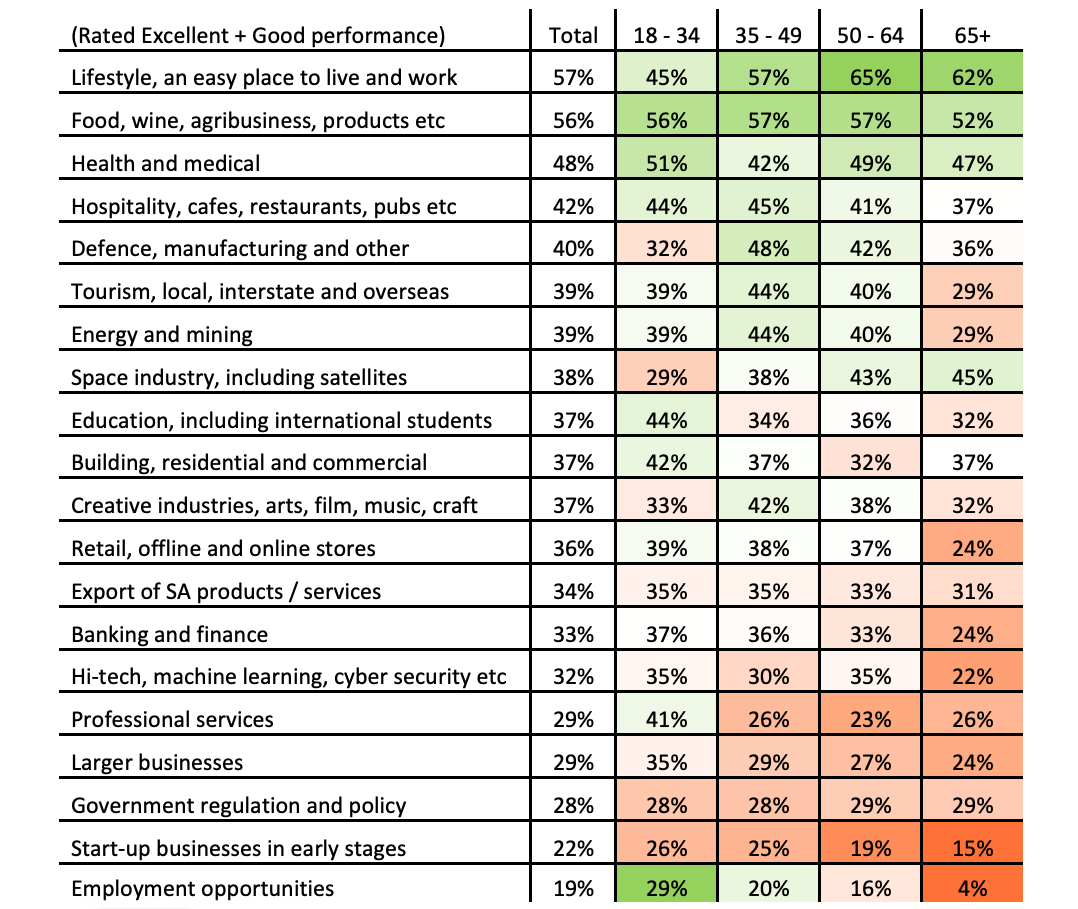 A lack of knowledge about what Dunstone terms South Australia’s economic ‘hidden secrets’ could account for much of the weakness in perceived economic performance across age groups.

“This lack of knowledge is impacting the overall general population confidence with the economy,” Dunstone said.

The survey found that despite concerted government effort to promote industry such as space and defence, knowledge gaps are larger for 18-34 year olds particularly for the performance of the space industry (30 per cent of 18-34 year olds did not know), start-ups (27 per cent), professional services (20 per cent) and defence (28 per cent).

“There is opportunity for advertising and other community education as to the economic contribution of key sectors, and how they are contributing to South Australia’s economy now and into the future,” Dunstone said. 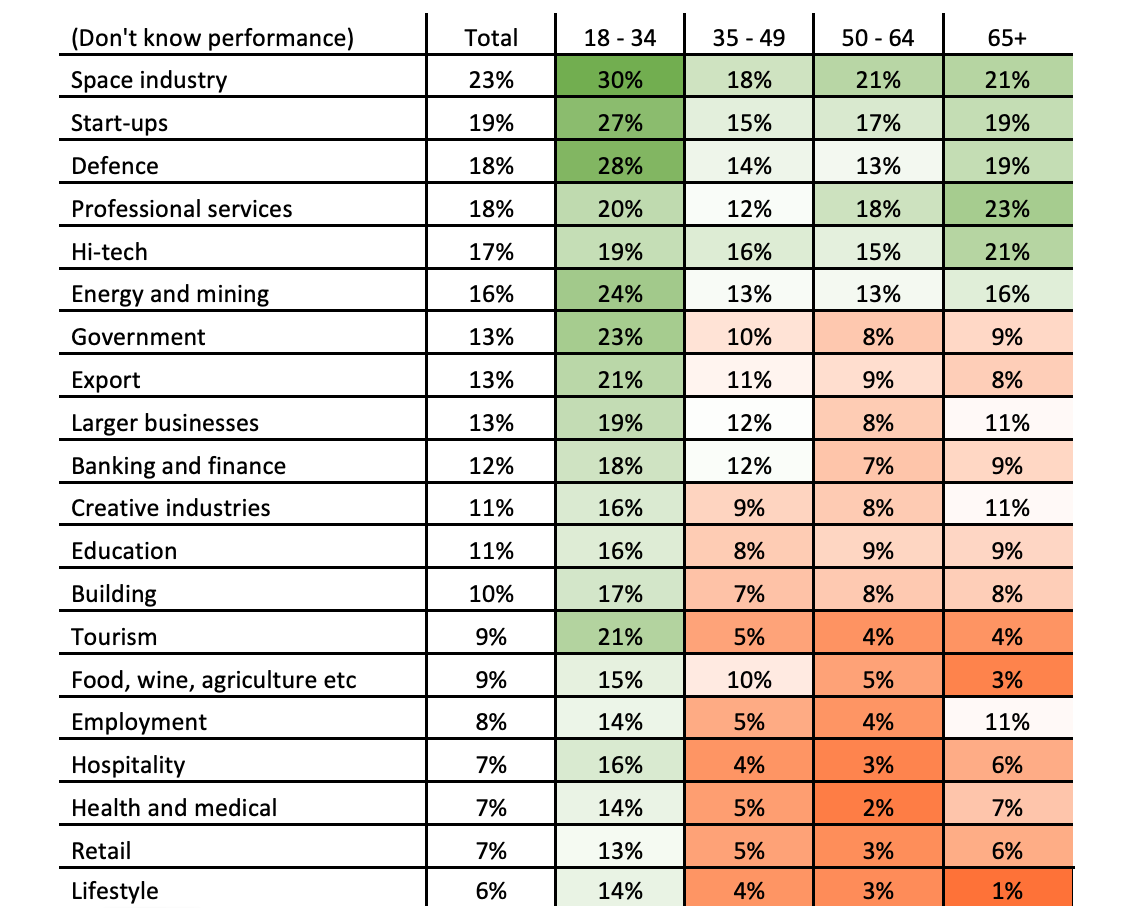 All 20 of the aspects were rated as important areas for the South Australian economy now and into the future.

The Creative Industries (arts, film, music and craft) received the lowest importance ratings (Extremely important plus Important) at 67 per cent, while the Space Industry (satellites and other sectors) was rated a 68 per cent.

The five most important aspects of our economy were recorded as:

Dunstone said the survey found that younger South Australians have a great sense of comfort with the need to think beyond state boarders for career advancement.

“They are also less convinced than older age groups that ‘there is no better place to live and work than SA,’” he said.

“South Australians aged over 50 are less in agreement that there are sufficient jobs for ambitious people than those under 50, and are more concerned about the need for younger people to leave South Australia to find suitable employment.”

Dunstone added that regional South Australians tend to be more confident about the overall strength of the local economy than metropolitan Adelaide.

Dunstone said the most recent mind and mood survey showed that there are clear opportunities for government and industry sectors to communicate their contribution to the South Australian economy.

“How they are creating jobs particularly rated as the clear most important aspect of the economy now and into the future,” he said.