Oil and gas, travel and banking were some of the hardest hit sectors while food, healthcare and tech stocks were among the better performers on the ASX.

Adelaide-based technology company Codan’s market capitalisation almost doubled to $1.28 billion for the year ending June as its share price increased 98 per cent from $3.60 to $7.09.

In February, the company announced a record half-year profit of $30.4 million on the back of booming sales of its hi-tech metal detectors.

Despite a 20 per cent dip in sales for April, Codan last month reported that May was a record month following a strong performance from its communications division. It expects to deliver a record full year profit of $63 million after tax.

Agribusiness Elders increased its value by $500 million for the year to $1.47 billion following drought-breaking rains, high meat prices and strong demand during the COVID-19 lockdown.

Sealink Travel, which last week announced it had won the contract to run Brisbane’s passenger ferry services, increased its share price from $3.63 to $4.42 for the year. 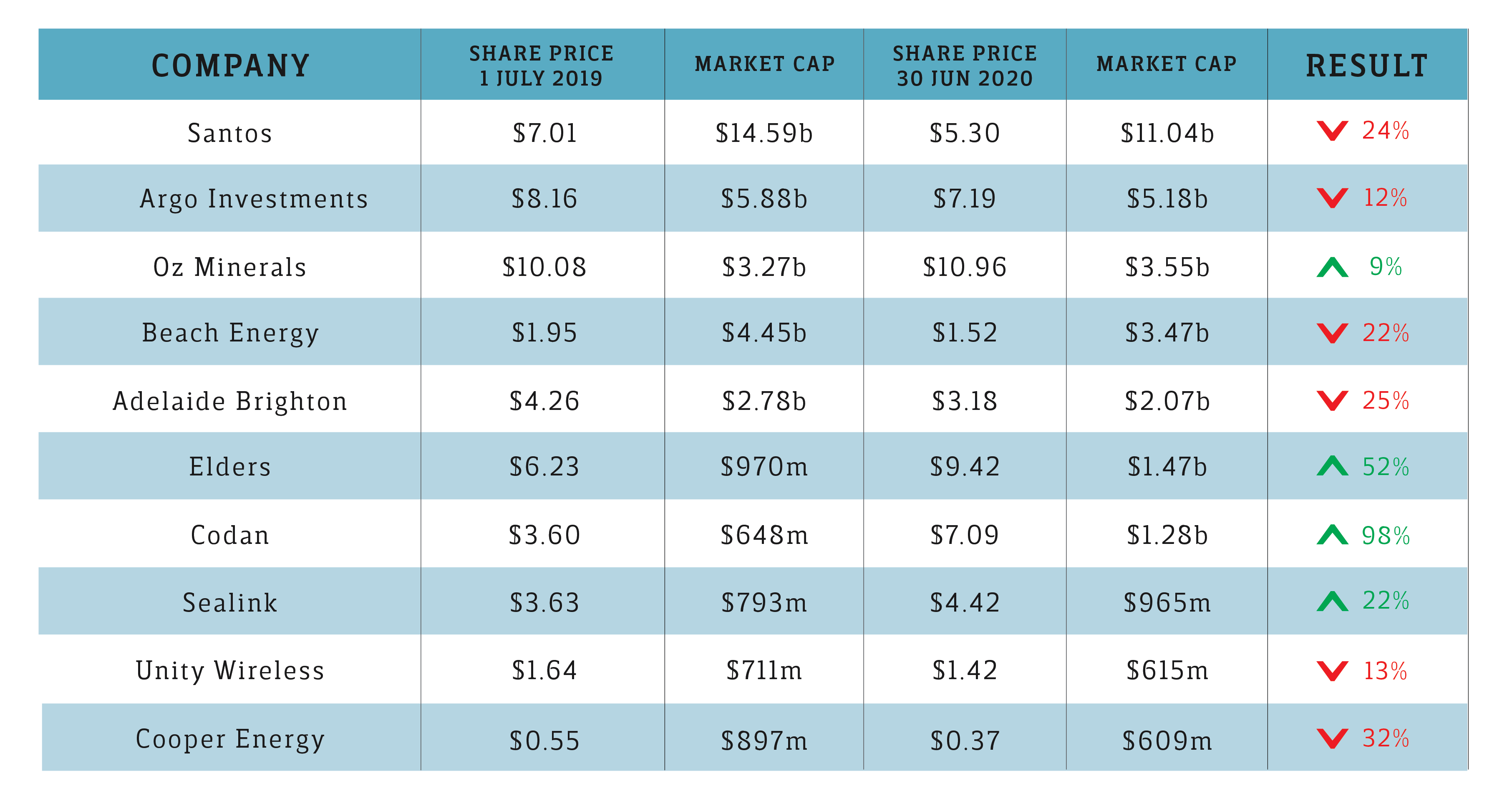 The market was relatively flat for the first half of the year, rising just 1 per cent from July 1 to December 31. But a strong January and February saw the market reach a record level on February 20 before the COVID-19 pandemic crippled global markets.

Adelaide-based listed investment company Argo Investments is the state’s second largest listed company behind Santos and saw its share price fall about 12 per cent for the year, roughly in line with the ASX200 fall.

Managing Director Jason Beddow said he was surprised by how strongly the market had recovered since its low point on March 23.

He put the bounce down to the amount of government intervention around the world to rescue ailing economies and the lack of other investment options in a time of record low interest rates.

“There’s never been such a concerted and concentrated effort to maintain almost the status quo – the stimulus the government’s supporting, the breadth of where it’s going and how quickly they’ve got it out into the economy is off every chart but there are still a lot of unknowns out there,” Beddow said.

“There are zero returns on cash or negative returns and nothing on bonds so equities for all the wrong reasons are looking relatively good.

“It’s not on confidence, it’s not on earnings and it’s not on strength of economies there’s just not a lot of alternatives to get a return on all this money that’s out there.”

Beddow said the strong performance of Elders shares in the past 12 months was a reflection of the Australian agriculture industry as a whole.

“A lot of these things were pretty depressed through the drought so the starting point was probably down but then with everyone eating at home that whole agriculture supply chain has done pretty well,” he said.

“There are not a lot of ag players in the country so Elders has done pretty well out of the combination of the drought breaking and everything else.”

Commodity prices including copper and oil took a hammering in March.

While copper prices have recovered the losses to be at about the same price as 12 months ago, oil is still down 32 per cent on this time last year.

Oz Minerals has copper/gold mines at Prominent Hill and Carrapateena in South Australia and increased its share price by 9 per cent for the financial year.

But the state’s major energy companies – Santos, Beach Energy and Cooper Energy endured losses between 22 and 32 per cent for the year.

Beddow said the copper price recovery and a number of positive market announcements had helped Oz Minerals end the financial year in growth.

“Most people who follow commodities like copper because it’s a lower risk way to pay the new world,” he said.

“You need copper in a lot of technology – trying to pick the next lithium or cobalt or graphene is a bit tougher but copper demand is going to be there.”

However, Beddow said continued sluggish demand as COVID-19 continued to limit travel meant energy stocks would likely continue to have a tough time.

“If you just plot their share price with the oil price then you’d probably find a pretty strong correlation I would have thought,” he said.

“Driving demand might come back and anecdotally it looks like it’s bouncing back round the world pretty quickly but we can’t see airline travel being back to where it was for years perhaps so there is still a bit of a mismatch with the oil price.

“The energy stocks are in for a challenging time – the oil price has bounced from US$20 to $40 but at $40 a lot of the projects that most of the Aussie energy companies are looking at are probably pretty marginal.”

Beddow said end of financial year reporting season in six-to-eight weeks would be insightful particularly among companies that withdrew guidance earlier in the year.

He said the market may not fully settle back into a steady rhythm until the 2022 financial year.

“If you look back over the last three months you wouldn’t have predicted it in a million years so I think it’s pretty hard to call the next three-to-six months.

“We’ve got the US election, which might not have a huge impact on Australia but we tend to follow the US market pretty closely and we just have to see how bad the COVID situation gets.

“We’ve got reporting season and I don’t think companies are going to have a lot of confidence in what the next six months are going to look like.

“There’s going to be more volatility, whether it be COVID, political or trade related – the market is pretty skittish.”