Despite record trade between the two nations, Chinese investment in Australia fell from $8.2 billion in 2018 to $3.4 billion in 2019, with 43 per cent fewer deals struck.

A new report from KPMG and the University of Sydney puts the plunge down to tighter Chinese regulations, a negative perception of Australia’s investment rules, and a shift towards Latin America and Belt and Road projects in developing countries.

Of the states, only the Northern Territory had a smaller share of investment than South Australia which, according to the report, attracts just 1 per cent of total Chinese investment in Australia.

In 2019, the report finds, Chinese outward direct investment in Australia feel to the lowest level since 2008.

“This decline in new Chinese investment was in striking contrast to the significant growth in bilateral trade which reached its highest annual volume ever in 2018/9 with AUD 235 billion, a 21 per cent increase.”

The agribusiness sector attracted the biggest share of Chinese investment in 2019, followed by commercial real estate.

“Interestingly, even though Chinese companies were very active in Australia’s healthcare over the past recent years, there were no completed transactions in 2019.” 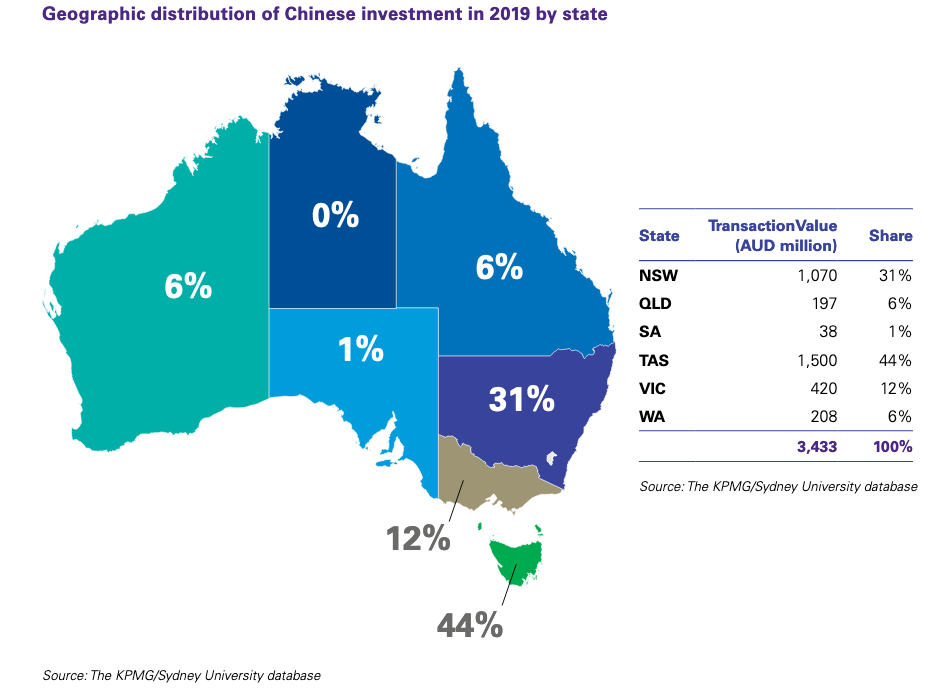 The report’s authors, KPMG’s Doug Ferguson and Professor Hans Hendrischke from the University of Sydney’s business school, said overall Chinese investment in Australia would remain “subdued” over the coming year.

“The impact of COVID-19 will no doubt have an ongoing influence as governments move to protect critical infrastructure and tech, and try to prevent opportunistic acquisitions of companies at undervalued prices,” they said. “Restrictions on travel have practically disabled new deal-making and due diligence activity.”

They said the large number of Chinese companies already established in Australia would continue to drive local activity and bilateral trade.