Latest data from the Australian Bureau of Statistics shows that 813 dwellings were approved for construction in SA in January.

That’s down from 912 the previous month, and from 1140 the month before that.

The last time fewer dwellings were approved during a full month in South Australia was in February 2017. 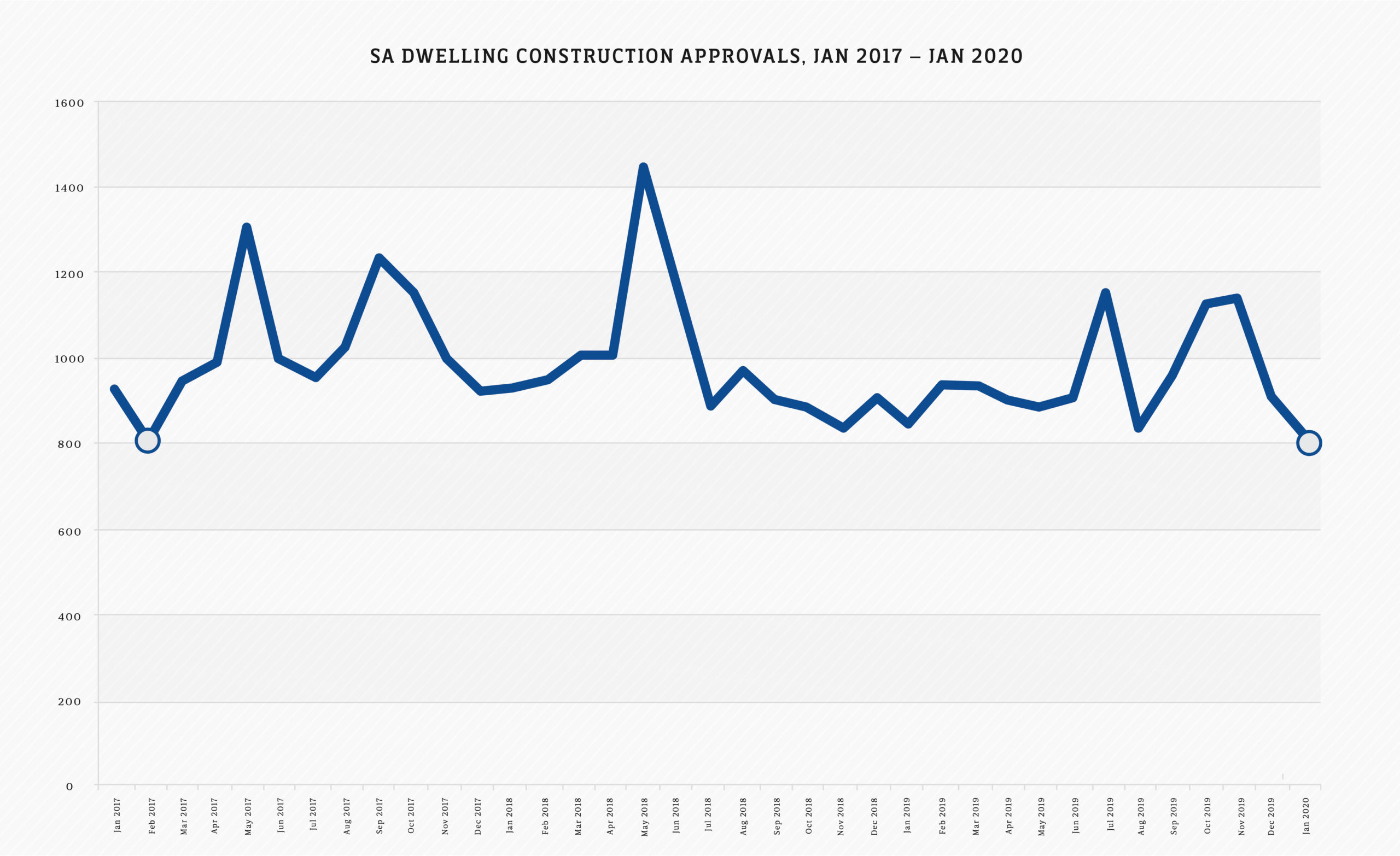 Although January is often a relatively slow month for building approvals, the latest figure represents 34 fewer approvals than were granted in January last year and 115 fewer than in January 2018.

“January is usually a quiet time of the year due to the state-wide industry shutdown over the Christmas-New Year period,” Master Builders’ Association CEO Ian Markos told InDaily.

“However, there is no doubt that the commercial sector – previously white hot – is rapidly cooling, with 31.4 per cent less work approved in the three months to January 2020 than the previous quarter.

“The Marshall Government’s $856m school building upgrades program is strongly welcomed by the industry, but everybody wants to see the rubber hit the road on projects that have been announced such as the new Women’s and Children’s Hospital, fire stations, courts and so on.”

Over the longer term, approval numbers sunk to a deep low in early 2012 before recovering to reach a dramatic peak in 2018, and then trending lower since. 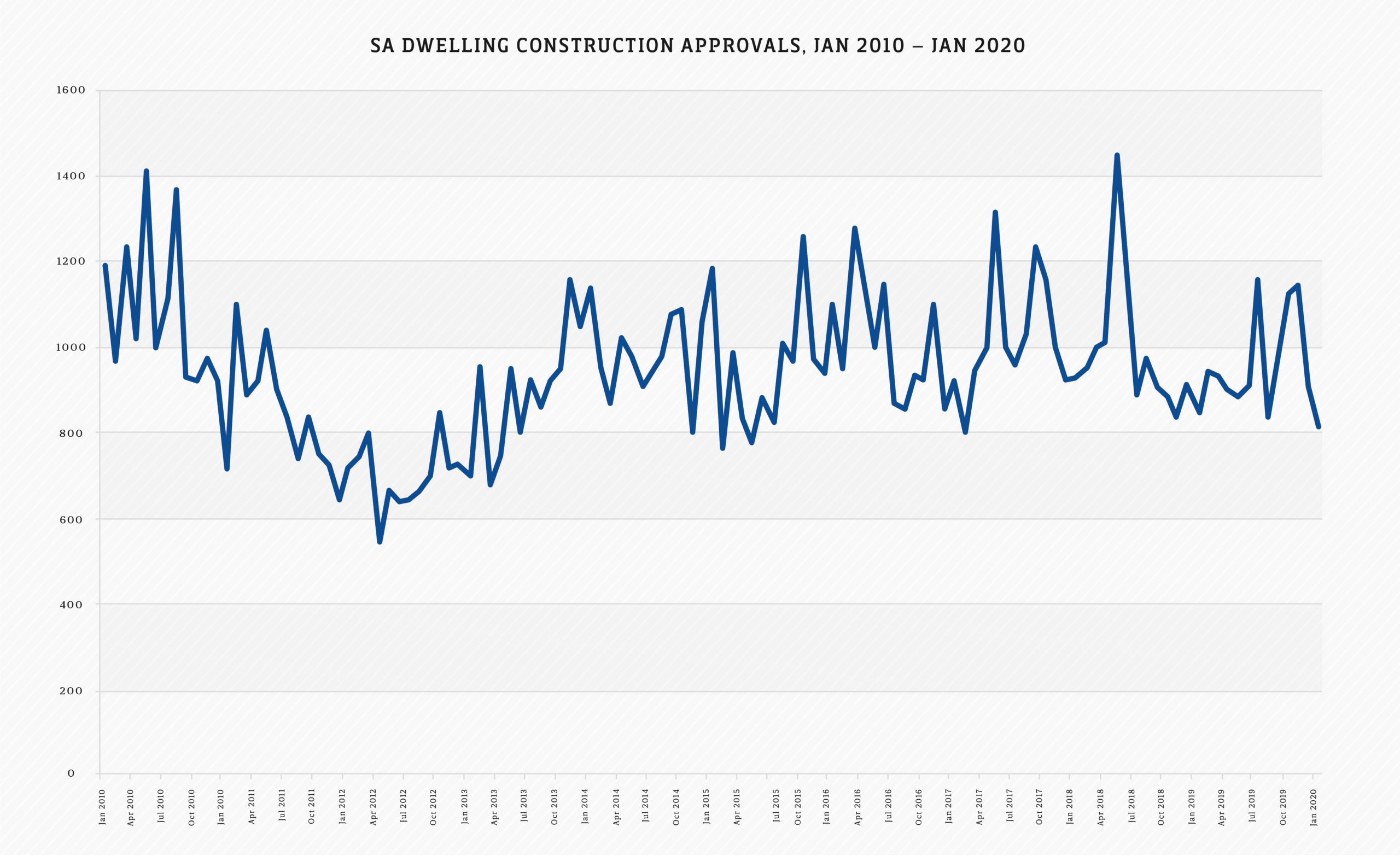 Meanwhile, liquidators have been appointed to wind up local company Custom Green Constructions.

The Morphett Vale-based building company was placed in liquidation yesterday, according to a notice from corporate regulator ASIC, with Adelaide firm Clifton Hall appointed to wind it up.

It’s the latest in a long line of South Australian construction companies that have folded over the past year – including Platinum Fine Homes, Coast to Coast Homes, Tudor Homes, Artisan Construct, JLM Homes and OAS Group – often with major financial consequences for their creditors.

Liquidator Tim Clifton told InDaily Custom Green Constructions – registered as a company in 2014 – owes 62 creditors about $600,000, with the largest claimed debt amounting to about $70,000.

He said the company had been engaged in a mixture of residential and commercial construction and had three employees, and 10 projects outstanding.

Clifton said the director of the company, Daniel Burgess, explained that it was “just a poor climate for building” at the moment.

And the liquidator added that there were “a significant number of disputes” on Custom Green’s books that had contributed to the business’s failure, although he was unable to describe the nature of those disputes were at this early stage of his investigation.

Markos said builders would be hoping yesterday’s 0.25 per cent Reserve Bank interest rate drop – to a record low of 0.50 per cent – helps improve the flagging industry’s fortunes, especially as the national economy comes to grips with the added impact of the COVID-19 coronavirus.

“Yesterday’s interest rate cut was badly needed to support the industry and the economy through the coronavirus challenge,” he said.

“There is no doubt we are facing some stong headwinds and the onus was on banks and lenders to fully pass on the interest rate cut to mortgage borrowers and small businesses.

“It is pleasing that for the first time in five years, all the major banks quickly announced that the 25 basis point cut would be passed on in full.”