The ASX-listed AUB Group was already a shareholder in the businesses but has increased its ownership to 100 per cent. The acquisition is expected to be completed by March 31.

He said the there would be no outwardly visible changes to the business as a result of the sale and its 41 branches and 550 personnel would remain.

MGA’s five shareholders will take a combined 10.7 per cent stake in AUB as part of the deal along with a cash payment of $29.13 million.

“In doing that, we’ve shown great confidence in the deal and the people who have taken that on are the movers and shakers in MGA Whittles and they’ve opted to go that way,” George said.

The Whittles Group was established in 1968 and is the largest Strata & Community Title management service provider in South Australia.

The insurance broking side of the business, MGA, was formed following a partnership between George, Brian McInerney and Allan Amber in 1982. 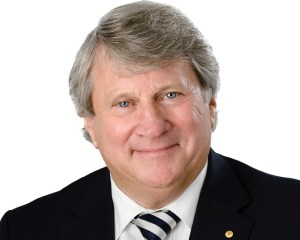 “We’ve done a lot of acquisitions over the years so we know the general insurance broking business and the body corporate management business,” George, right, said.

“We’re the third-largest in the country in strata management and we know those businesses extremely well and we see this as a positive step in moving the MGA and Whittles group forward.

“AUB really had really had no serious platform for growing their general insurance broking business and they see us as a very valuable part of their organisation to grow their shareholder value.

“One thing it does is it allows the group access to capital for further acquisitions in the future, particularly in the strata space, so that really appeals to us.”

AUB Group Managing Director and CEO Mike Emmett the acquisition places MGA at the heart of Austbrokers and enables the next phase of growth.

“In addition, the Whittles strata specialty will add a significant complementary capability to AUB,” her said.

“I’m delighted that the McInerney, George and Amber families together with other shareholders, are displaying their long-term faith in AUB by taking a significant portion of their consideration in equity.”

AUB Group is based in Sydney and has a market cap of about $950 million. AUB also announced to the ASX this morning that it had also acquired 40 per cent of online insurance distribution platform BizCover.

The company’s share price was up almost three per cent to $13.16 this morning following the announcements.