Queesland is in fifth spot, followed by SA, but the report says there is “little to separate the two states”.

SA’s economic activity for the September quarter was up 15.9 per cent across its decade average, but its nominal annual 1.3 per cent growth rate was the nation’s lowest.

The state came fourth on construction work done with 8 per cent above the decade average, but down 5.4 per cent in the past year.

While Canberra had the strongest jobs market, SA’s employment rate was growing by just a 0.2 per cent annually.

The state’s unemployment rate was 4.0 per cent above the decade average, with the trend jobless rate rising for the past 15 months to a 30-month high in October. 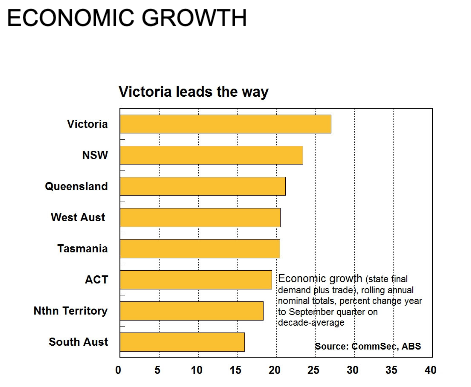 SA’s trend housing finance figures were up 19 per cent on the decade average, but actual dwelling starts were down 9.3 per cent, while house prices had dropped 0.1 per cent in the past year.

The state’s spending was up 8.5 per cent on the decade average and equipment investment was up 1.5 per cent, but dropped by 5.1 per cent in the past year.