A third of the region’s 3000ha of vineyards are within the fire scar, with about 500ha of vines across 60 vineyards sustaining damage.

Hundreds of volunteers began working in affected vineyards almost immediately after the fire to reinstate irrigation systems to water-hungry vines.

Rosback said the use of GPS technology allowed his 15ha vineyard to be quickly assessed to determine which vines had sustained burnt trunks, scorched canopies and the severity of damage. It also mapped the location of burnt posts and irrigation damage.

About 15 kilometres of irrigation tube and 1450 posts have been replaced on the property and a further 45km of irrigation repaired. Up to 90 per cent of the vineyard’s vines sustained canopy scorch. Although three of the four blocks had trunk burn rates of less than 5 per cent, 60 per cent of vines in the largest block on the property had burnt trunks, prompting Rosback to take drastic action. 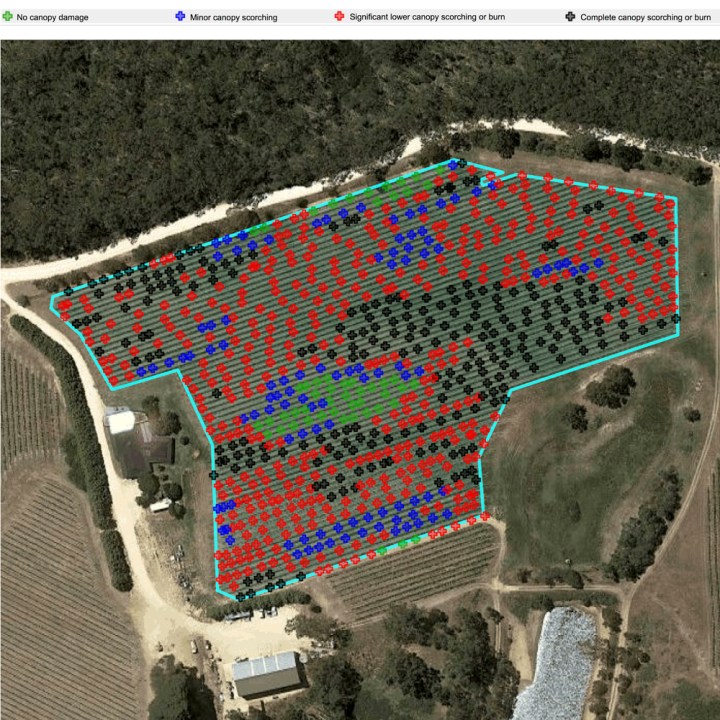 A GPS map showing canopy damage to individual vines on one of Charles Rosback’s Chardonnay blocks.

This week, volunteers and GLOG Viticulture staff have used the company’s Maxicut system, usually used in winter to cut away trunks suffering Eutypa dieback, to cut trunks off just a few centimetres from the ground across the entire block.

Rosback said the action needed to be taken immediately to give new shoots the best possible chance to be trained into replacement trunks before the end of the growing season in April. The use of the GPS technology was crucial in quickly identifying the areas needing to be cut back, he said.

Rosback is hoping the new vines will return to about 60-80 per cent production next year and will be back to full yields in 2022.

Glog Viticulture business development manager Martha Valkenburg was working at a Balhannah vineyard in 2009 when a bushfire went through and has used her experience to develop the strategy.

“From Martha’s previous experience from a fire 11 years ago we knew that those vines that had been burnt on the trunks, they needed to be cut down to an inch off the ground to get rid of that dead or damaged wood so we can grow a new trunk,” Rosback said.

“By cutting it down you are allowing a new trunk to grow that will be healthy and will have full sap flow. 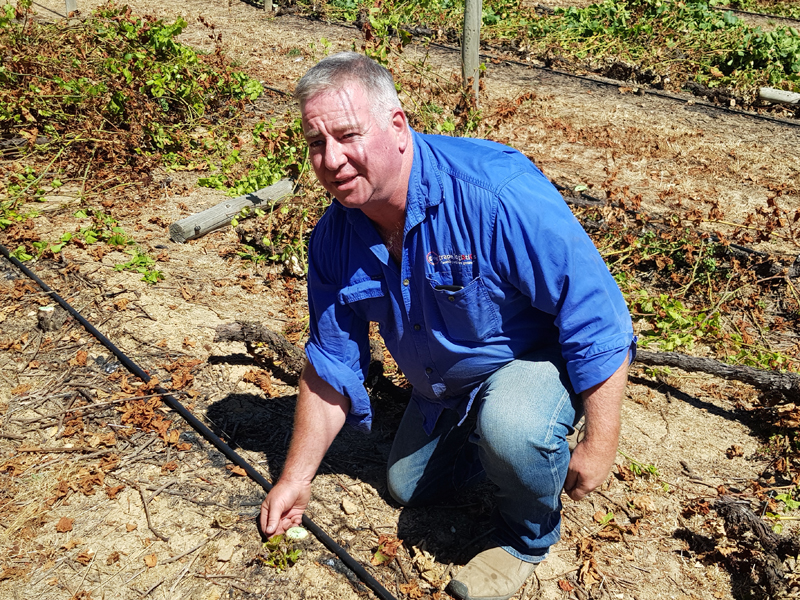 Charles Rosback inspects a new vine shoot emerging from the base of a severed vine trunk.

“We’ve already got customers asking us to provide this service and we’ve got equipment going out. We’ll probably do five or six vineyards in the immediate future and that will also reduce the pruning burden in the winter.”

The adapted Maxicut system, which is essentially a duel set of high-powered vineshears run off a tractor’s hydraulic system, can work through about 500 metres of vines in an hour.

The trial will compare results between the entire block being cut with other blocks on the property where single rows or individual vines are being cut and other vines that are left to recover with minimal intervention.

Rosback held a field day at the vineyard yesterday to show other growers what they had done.

“Some people will make the decision to cut their vines down in winter and they’ll grow a new vine next summer but this will delay fruit production,” Rosback said.

“What we’re doing is acting now with the intent of growing a crop next summer so our recovery process and our cash flow implications are minimised by taking action.”

Many of the fire-affected vines have reshot, giving them a green appearance despite having scorched fruit and burnt trunks.

Long-time Adelaide Hills grape growing expert and Hamilton Viticulture consultant Richard Hamilton said his advice to fire-affected growers was to get irrigation back on immediately and then wait six-eight weeks to see how vines responded.

“It’s a lot of work to cut it back – why not let the vine do its own thing and you might get the same outcome,” he said.

“We don’t actually have a lot of information on that, so the couple of growers trialling it will be able to provide some answers but what we’re looking for is maximum leaf growth as soon as possible because the vines have got very little reserves at the moment.”

The Adelaide Hills region is home to more than 100 wine producers and almost 300 vineyards.

This year’s harvest is expected to begin next month and continue into March and possibly April for growers who still have healthy fruit to pick.

Several grower meetings have been held in the Adelaide Hills since the fires to answer questions and help build solidarity among affected growers.

Gumeracha winery Mt Bera Vineyards suffered significant damage to its 75ha property in the Sampson Flat Bushfire in January 2015. Last month’s fire came within 50 metres of the property again but did not burn any vines.

Mt Bera owner Greg Horner has attended two of the recent grower meetings where he has spoken about his experiences of repairing a fire-ravaged vineyard.

Glog Viticulture has adapted its Maxicut vineshears to cut off burnt vine trunks.

He has also started a blog on the winery’s website as a reference for other growers and to provide hope that recovery is possible.

Horner has visited a handful of fire-affected vineyards in the past few weeks.

He said a lack of appropriate machinery and funds forced him to wait until winter pruning to train his replacement trunks but he saw merit in Rosback’s strategy.

“You’ve got to balance out action with getting a crop as soon as possible – if the vines aren’t that badly burnt you’re probably better off to wait,” Horner said.

“They are two weeks earlier than our fire, the season is probably a week later as well so they’ve probably got three weeks up their sleeves. If they can go through and do training passes and get the shoots up to the wire then they could easily get a crop next year.

“I’m just trying to help people because there’s so little information around. I don’t think that most people realise that when the vines burn on the top they are still very-much alive underground.”